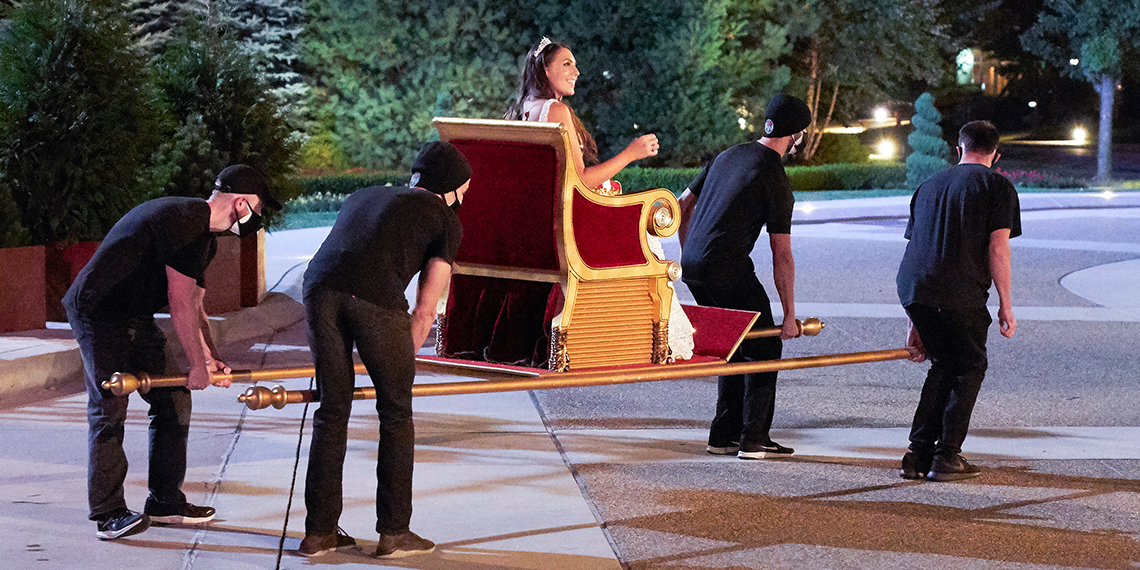 Welcome back, Bachelor Nation! Though can it truly be considered a “welcome back” situation when the break between seasons has been shorter than my hangover was after New Year’s Eve? (By the way, yes, you can still be hungover even if you only spent the night drinking Trader Joe’s champagne and binge watching Cobra Kai. Welcome to your late 20s, people!). Part of the reason ABC was able to churn out content faster than my 14-year-old cousin’s TikTok account was that, instead of choosing the next Bachelor based on whichever loser from last season lived closest to the Bachelor mansion *cough* Peter *cough, cough*, they instead cast completely outside the franchise. I would say “what a novel idea”, but this feels less novel and more like someone put an ounce of energy into doing their job—but by all means let’s congratulate them with fervor nonetheless!

And who is this nobody looking for love whom ABC decided was a better option than giving Nick Viall a 12th shot at love? Matt James! Matt is a former North Carolina college football player-turned-NYC transplant whose profession is being ridiculously good looking and famous-adjacent with Tyler Cameron. Sorry, I meant to say commercial real estate. His profession is totally that and not the sponsored deals he got through his time with the Quarantine Crew. He’s also the first Black Bachelor ever (we love to see it) and the only man to make Chris Harrison seem petite. It appears his worst quality is that he… only looks okay in that mustard turtleneck? Honestly, I’ve got nothing.

MATT’S MOM: It sounds like you think… this process could… work?
MATT: Yes, I do.
MATT’S MOM:

The face of someone who just realized they will probably need to wait a solid 10 more years before getting grandkids. I’m equally skeptical, lady!

Matt tells us he’s been waiting a long time to find The One, and I’m deeply concerned for my own romantic future. The man is a romance novel’s wet dream and you’re telling me he couldn’t get a few meaningful swipes on Raya?! If the 6’5″ former college athlete-turned-real estate mogul and philanthropist is hard up for dates, then what hope is there for the rest of us? I might as well head back to the Jamba Juice and take up that register boy’s offer to “kick it” sometime. As if to illustrate my point, the cameras quickly pan to a close up of Matt James’ slick body doing an insane amount of pull-ups as every man in America watching this with his significant other just went limp with performance anxiety.

As we head into the first night of Matt’s journey toward love, I’m noticing a few things right off the bat. One, though the setting for this season is a far cry from the tacky elegance and bubbling fountains of the Bachelor mansion we know and love, this place is leaps and bounds better than that trash La Quinta Inn they forced Tayshia and Clare to gallivant about last season. They went from having rose ceremonies in between the continental breakfast and the lobby bathroom to a space that has crystal chandeliers and hors d’oeuvres that didn’t come from Costco. The glow-up is insane.

The second thing I’m noticing is that instead of jumping right into whatever limo antics the producers have set up, we’re treated to a meaningful conversation between Matt and Chris about race and dating. I mean, don’t get me wrong, Chris Harrison is woefully inadequate when it comes to conversations like this, but I appreciate that they’re having them all the same. Matt talks about growing up in a biracial home and this pressure he feels to date a certain type of woman, while Chris prattles off inspirational platitudes that relate not at all to the situation, but that he saw on a Hallmark card one time.

MATT: How do I balance this enormous legacy of being the first Black Bachelor with my own happiness?
CHRIS HARRISON: They call it a leap of faith for a reason.

Christ. Someone check Chris’s programming this season because this sh*t ain’t going to fly anymore. You’re gonna need to go off book at some point, buddy!

Moving on to the limo entrances! If we’re being honest, the limo entrances are pretty lame this season. There aren’t too many gimmicks and most people stick to the “hi my name is X and I’m excited to meet you” script. Not one person asks Matt to slap the bag or sneaks a Johnny Bootlegger in their bra. Where is the spunk? Where is the personality?? Personally, I would have introduced myself as someone whose “hidden talent” involves coming up with an insult within minutes of meeting you that feels not only inappropriate but somehow weirdly personalized to your specific childhood trauma. But, hey, that’s just me.

That said, there are a few standouts from the limo entrances:

– Chelsea looked STUNNING in that little black number. I think at one point Matt says “damn she’s wearing the hell out of that dress” and he is absolutely correct.

– Magi is both gorgeous and a pharmacist. That feels like witchcraft to me.

– Kaili showing up in black lingerie and then immediately chugging red wine the minute after she met Matt is some real hero sh*t.

– Victoria’s entrance looked like a knock-off of one I saw on My Super Sweet 16, except that those youths were able to afford hot hired help, not the less-than-enthused film crew who huffed her ass down the street.

After the limo entrances, Matt makes his first rose ceremony speech as the Bachelor. Instead of the half-hearted “to love!!!” cheers that most of his predecessors have used, he decides that prayer is more of a mood setter. And boy, does he know his audience. Before he even finished asking them to bow their heads, half those girls were closer to orgasm than they have been with any of their ex-boyfriends. Also, please note that I’m getting a huge kick out of watching all of these women pretend to be religious as they wear lingerie and clutch their used vibrators.

Is it just me, or is the cocktail party also kind of a snooze fest? Nobody is really standing out to me thus far except for Rachel. She looks HOT in that emerald green dress in a way that is making me want to report her social accounts for inappropriate activity out of spite.

Mari also makes a decent impression on Matt. She tells him she’s from Puerto Rico and I’m immediately impressed. Not with her, she butchered the word “pressure,” but with Matt for both knowing anything about Puerto Rico other than he thought about going there for spring break one year, and also for not trying to twist his sympathy for Hurricane Maria victims into an opening for him to stick his tongue down her throat. Bravo! You’re not scum.

Just as Mari is about to open up about her family’s devastation, Katie takes that as her cue to literally tap her out of the conversation with her crusty vibe. You guys, I think I might be rooting for Katie? First of all, she’s the only realistic one about her pleasure. I don’t care how much b-roll they have of Matt’s abs. If there isn’t a sparkly purple dildo in every fantasy suite then I’m not believing all those sound effects. Second of all, she’s average pretty, and I mean that in the kindest of ways. She’s the only one who doesn’t look like she immediately ran to a cosmetic dermatologist two weeks before departing for this season. I hope you go far, girl!

Okay, “The Queen” looks over-served—like me in any of my friends’ wedding reception videos. I know she’s supposed to be the villain of this season, but I think the cruelest thing about her is that she was born with one singular brain cell. Seriously, I’ve met potatoes that had more neurological functions than this girl.

No one makes more of an impression than Abigail, who is hot, deaf, and has some semblance of a personality. It’s not hard to see why Matt likes her and she’s able to snag one of the only smooches of the evening. He breaks off their convo to get her the first impression rose AND WHAT’S THAT? IS THAT MY HEART GROWING THREE SIZES ON THIS DAY? I mean I’m actually smiling watching this, it’s so cute.

And just like, that we’re at the rose ceremony! The only true surprise out of this rose ceremony is that he ends up keeping Queen V. There’s something to be said for keeping the drunkest slob kabob in the room. It makes whatever you say or do look less alarming when you have a girl in one corner singing “God Save The Queen” into her over-filled champagne glass and another girl waving around a dildo in the other. I mean, I wouldn’t know, as usually I am the slob kabob in question, but these are things I’m told make my presence so “fun” and “entertaining” when I’m in the company of friends. Here’s who gets the boot: Alicia, Amber, Carolyn, Casandra, Corrinne, Emani, Kimberly, and Saneh. Miss you already!

And that’s all she wrote! Until next week, kids!