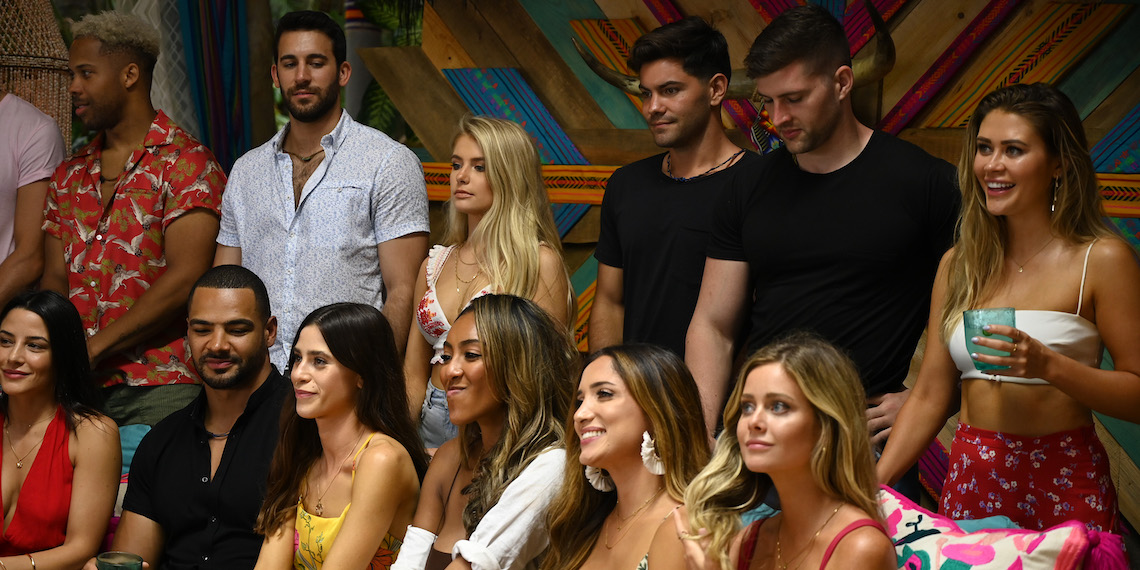 UPDATE: Aaaand just like that, it’s officially over. After a few days of rumors, Tayshia finally took to Instagram on Wednesday afternoon to confirm the news that she and John Paul Jones have decided to go their separate ways. Sad! Tayshia says in the post that she likes to keep her personal life private, which is pretty hilarious for someone who’s been in multiple reality TV relationships in the past year. Obviously, she realized this too, and it’s good to hear the news straight from the source.

She says that after a while, the fact that they live across the country was just too much to handle. Truly like, shocking that long distance isn’t easy, huh? Tayshia says sshe and JPJ are still “the best of friends,” which like, who knows if we actually believe that. But John Paul Jones did comment on the post with a heart emoji, so at least we know they haven’t blocked each other. So yeah, we’re saying farewell to this BiP couple, but it seems like things are on pretty good terms.

I know you guys have been asking about John and I recently, and as much as I like to keep my personal life private, I realize you have all watched and been a part of our journey from the beginning. Therefore to stay true to that, I need to be open and honest with you in order to heal and move on. John and I had something incredibly special. We fell for each other in Paradise, and everything was a whirlwind after that. When the show ended, I truly went back to Maryland to see if what we had was something we could build on without cameras, a production crew, and without feeling any pressure: to simply figure things out on our own terms. But the reality was, we were living on opposite coasts, and working insane schedules that made it impossible to see each other and build a life with each other. We truly did the best we could, but at this time have decided that what is best for the both of us is to go our separate ways. We are the best of friends and will continue to remain in each other’s life because regardless of the situation, we make each other happy💕💕

It’s been a cool two months since Bachelor in Paradise ended, but if you think we here at Betches have been sleeping on the statuses of these couples just because of a little thing like production ending, then you’d better think again. What else am I supposed to do with my time during regular business hours if not aggressively deep diving into these people’s private lives? Actual work? Nah, I don’t think so. Well, the Demi and Kristian breakup rumors aren’t the only couple updates we need to talk about. It’s recently come to my attention via a Reddit thread (a place where all hard-hitting journalism stories truly begin IMO) that BiP prom king and queen John Paul Jones and Tayshia Adams might be officially over (as if they were ever really together to begin with).

When the two hit it off in Mexico this summer, I just instinctively knew that it was entirely for ratings. I mean, Tayshia referred to John Paul Jones, a man I’m convinced was only a part of the Bachelor franchise because he lost a bet to his frat brothers and was blackmailed into going on the show, as an “old soul” and “very deep” after he butchered some Shakespeare lines on national television.

And while most of the reality TV-loving world has been shipping these two since Tayshia ran down the beach wailing “I’M SORRY JOHN”, I’ve had my doubts as to the legitimacy of their relationship for awhile now. Turns out, I was right to be skeptical, because apparently Tayshia was caught RED-HANDED out on a date with another man last week.

Reddit user Poopburb (not a great username I know, but a whistleblower nonetheless!) posted in a thread that their coworker’s neighbor spotted Tayshia out on what appeared to be a date that wasn’t with JPJ in Newport Beach on October 24th. The coworker’s neighbor said that Tayshia and the mystery man were “flirting and touching all night” and there’s even video evidence to back up the claim. If you watch the video, Tayshia is most certainly with someone who doesn’t have the hair of a long-lost Hanson brother but, like, she could also just be catching dinner with an old friend. Fans are saying the video is damning because Tayshia and her date are sitting on the same side of the booth, which apparently means they’re dating. Again, not really rock solid evidence of a break up with JPJ so much as rock solid evidence that Tayshia might be a sociopath, because only monsters sit on the same side of the booth as the other person they’re dining with, but fine Reddit.

This isn’t the first time it’s been speculated that JPJ and Tayshia’s relationship was all for publicity. Reality Steve tweeted that the couple had broken up way back in September, and were only keeping up appearances on social media for the fans and sponsorship deals. While fans were outraged at that accusation, Tayshia and JPJ haven’t exactly been flaunting their relationship, and by that I mean they’re about as active on each other’s socials as I am with the cousin my mother guilt-tripped me into following on Instagram (you know who you are, Sabrina!). In fact, they’ve almost been nonexistent from each other’s Instagrams, until October 7th, when Tayshia was briefly mentioned on JPJ’s IG feed while both were at a brunch with other Bachelor alums. Tbh to me, their lack of vom-inducing posts says more about their relationship status than this shaky 30-second video.

But all of this speculation on Tayshia and JPJ’s relationship has made me wonder about the other couples from last season’s Bachelor in Paradise. Are they still in love and dry humping on my Instagram feed? Pretending to date the other for spon-con purposes? Broken up and summoning a vengeance demon to plague the other with incurable acne and a mild case of crabs? I’ve done some digging and here’s what I’ve discovered:

Okay, was this even a real question? These two have been going strong ever since they got engaged in Paradise, and I know this because Dylan won’t shut the f*ck up about it on his Instagram. But, I mean, every happiness to you both!

Moving on to Katie and Chris. Their reunion on the BiP after show was hard to watch. Katie admitted that Chris is a piece of sh*t and Chris looked like he would just rather be excluded from this narrative. After the finale aired, it appeared the couple had made up and were giving their relationship another chance because true love is real after all. That said, Chris has been suspiciously absent from Katie’s Instagram ever since the After the Final Rose episode aired, but she was also seen wearing her engagement ring at some sort of influencer retreat on October 11th. Chris also shocked us all when he posted a photo with her on IG a few days ago. So, like, maybe they are fine? Either that or they don’t want to give Neil Lane his ring back! I’ll let you be the judge!

We already talked about this, so click here if you want all the details we have so far. Long story short, it’s not looking good. There’s plenty of evidence, but this shady comment that Kristian’s sister left on Demi’s photo is probably all you need to see.

NOT DESPERATE AT ALL. Y’all I’m dead. Deceased. The comment has since been deleted, but god bless the internet and rabid Bachelor fans for always doing the most when it comes to screen shotting the evidence. Since this feels like a comment I have definitely left on my sister’s ex-boyfriend’s new “in a relationship” status on FB, I’m going to go ahead and say I’m pretty sure Demi and Kristian’s relationship status is deader than my last house plant.

So there you go! That’s the status on all the Bachelor in Paradise couples as far as I can tell from judging their social media posts. Now, if you’ll excuse me, I need to go explain to my mother what spon-con is and why people would fake a relationship to get it. TTYL!