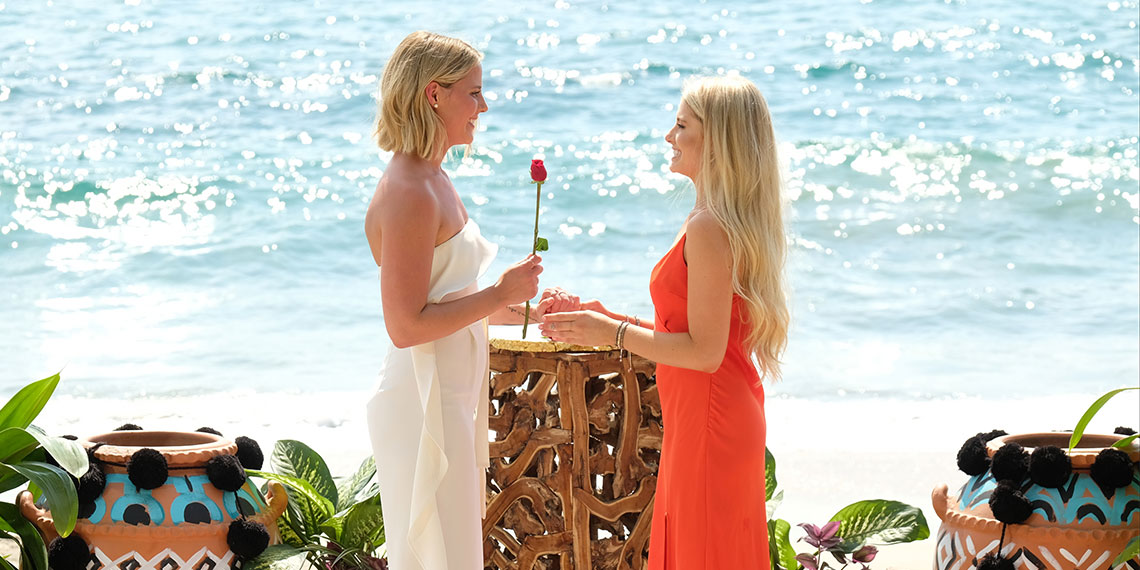 UPDATE: Well, this isn’t a good week for the hopeless romantics in Bachelor Nation, because a second couple from this season of Paradise has officially called it quits. Yesterday, we got confirmation that Tayshia and John Paul Jones are over, and now Demi and Kristian have confirmed that they’ve put their relationship on hold. I may not be surprised, but I’m still sad that they couldn’t make it work.

Like a couple that’s been through an intensive round of PR training, Demi and Kristian announced their split with joint Instagram posts, featuring identical captions and tender photos of them together. This is an interesting comparison to Kristian’s sister’s messy AF comment on Demi’s previous Instagram. While I do love a good dramatic breakup, I’m happy that they seem to be on good terms, at least in public. Sadly, there are plenty of homophobic assholes out there who will be saying “I told you so” about this breakup, so at least Demi and Kristian are being classy about it.

What has always been at the forefront of our relationship is love and care for one another. Our priority is doing what is best for us. With a heavy heart full of love for one another we have decided it is best for us to take a step back from our relationship. We ultimately want what is best for us in the long run and for us right now, that means being apart and growing individually. We have felt so much love and support from you all as you’ve followed our journey together and for that we are grateful. We will forever be proud of the impact our love story has made and we hope it has helped others feel more accepted and confident within themselves. We hope it reminded others they aren’t alone and don’t need to be ashamed of who they are. And we hope it shows that two people can love one another in different ways and for us right now that is apart. But we remain committed to encouraging each other, supporting each other and continuing forward in a way best for us.

Once the dust settles from the breakup news, ABC will be left with an important question: are they ready for a non-straight season of The Bachelorette? As a fan favorite who happens to be sexually fluid, there’s no denying that Demi would be an exciting choice, and a logical one at that. Personally, I’m not holding my breath for ABC to have a bisexual Bachelorette when they can’t even commit to a Bachelor that doesn’t look like a Ken doll, but it’s nice to imagine.

And just like that, we have plenty of drama to talk about in this Bachelor off-season. Yesterday, we unpacked some major spoilers for Peter’s upcoming season, but today we’re dealing with a fan-favorite couple from the most recent season of Bachelor in Paradise. All good things must come to an end, and sadly, it looks like Demi and Kristian may have broken up. Nothing has been confirmed yet, but there’s some social media evidence that we definitely need to discuss.

As you probably all recall, Demi went on this season of Paradise feeling deeply conflicted about her relationship at home with Kristian. Over the course of the season, she came out to her fellow castmates/the world, had her girlfriend come to Paradise, and ultimately got engaged at the end of the season. whirlwind really doesn’t even begin to describe it, and like any Bachelor engagement, it was never guaranteed to last.

The rumors first started to pick up steam this past weekend, when Demi and Kristian were seen out and about at different Halloween parties. Alone, that wouldn’t have been like, super damning evidence, but this week the social media posts have started to back things up. Yesterday, Demi posted this photo, and I have to say, she’s never looked better. This is literally the definition of a thirst trap, so much so that Demi literally hashtagged #thirsttrap in her caption.

Demi obviously looks great in the photo, and she got tons of supportive comments from her fellow Bachelor alums. Take, for example, this comment from Blake, who might actually be trying to…be nice to a woman? A weird concept for him, but I think that’s what’s happening for him here.

But there’s one comment on the photo that’s considerably less positive, and it did a lot to fuel the rumors that there’s trouble in ~paradise~ for Demi and Kristian. The comment comes from none other than Kristian’s sister, Caitlin:

Oof, I am cringing so hard right now. Aside from whatever personal drama is going on with these people right now, I personally don’t think it’s that desperate for Demi to post this photo. Like, there are millions of Instagram thots out there posting bikini pics regardless of their relationship, and Caitlin’s comment really just comes across as slut-shamey. In this situation, she’s obviously trying to be catty, but to comment this in such a public place isn’t a great look.

Okay, so even though this is frustratingly light on details, it’s clear that Kristian is going through some sh*t right now, and it’s only logical that Demi is involved.

If all of this stuff is real, and Demi and Kristian have broken up, I’m sad to see them go, but not necessarily surprised. I’ve always thought it’s insane how the Bachelor producers expect multiple couples to magically be ready to get engaged at the end of a few drunken weeks on the beach. And on top of that, we watched as Demi was coming to terms with her sexuality, just weeks (days? idk how this works) before getting engaged to the first woman she was ever in a relationship with. I’m not saying there was no chance it was going to work, but that’s not how a normal relationship works

Hopefully Demi and Kristian will speak out soon to clear things up, but for now it doesn’t look like things are going great.