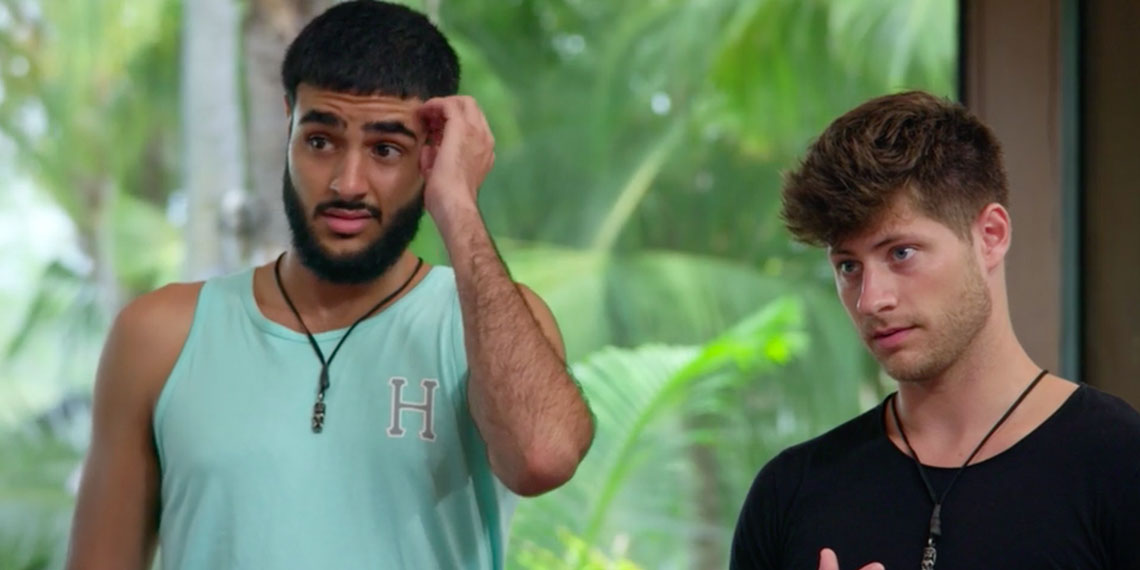 ‘Are You The One?’ Recap: He’s Just Not That Into You

Welcome back, fellow masochists! We’ve survived to see another week of Are You The One?, but has Cam survived Kwasi’s attack? Let’s check back in with our favorite semi-lovable losers!

We figuratively jump right back in to Kwasi literally jumping on Cam. The guys break up the fight, and Cam’s body thankfully remains unharmed, but unfortunately it appears at some point the sleeve monster did get to his shirt. Bria, always the voice of reason, walks Kwasi out of the room while the men continue to scream at each other.

Kayla is upset because Kwasi was basically saying he just wants to bang her. Oh honey, it’s 2018. If a man hasn’t degraded you to the point of tears, are you even alive?

GUYS. Bria telling Kwasi to calm down and that his mom wouldn’t want to see him acting like this is making me lol. Am I taking crazy pills?!

WHAT ABOUT YOUR MOM, BRIA?! Perhaps you should have thought of this little tidbit before you screamed at Morgan, nearly beat the door down of the confessional, verbally assaulted Zak, stared maniacally at Morgan while vowing revenge, etc, etc, etc. I could go on but they actually do expect me to do work at my day job.

Cam comes back into the house and tells Kayla he just couldn’t stand for the way Kwasi was talking about her. Is it just me or is the Trump supporter turning out to be the most decent guy in the house? Of course by “decent” I mean “doesn’t treat women his own personal sex toy,” but still.

It’s the next morning. Samantha and Asia go out to the water to talk about Lewis, on whom Asia is still crushing from back in the “Kenya topped him off” days.

Sam to Asia: You guys are clicking
Sam to the camera:

In the glam room, Moe is blow-drying his beard and telling Lauren he just doesn’t think he’s connecting with anyone in the house, but he is learning how women want to be treated. Oh, Moe. You’re doing amazing, sweetie. Go show off that freshly blow-dried beard and get yourself a girl! Lauren, clearly having drank the fate Kool-Aid, says it will happen if it’s meant to be. FYI Lauren, MTV doesn’t pay you more for agreeing with their dumb ideas.

Sidenote: Maybe next year they should get a therapist or relationship expert into the house to help these morons out? Because I don’t think telling people who are bad at love to try harder is working. I would know, it’s only what every single person I turn to for advice says.

Tomas takes Cali outside for a little picnic, and if he thinks that’s going to make her forget that he couldn’t get it up, he’s going to need a lot more alcohol.

In the hot tub, a bunch of the cast is hanging out and Tevin and his soulful eyes ask Brett who he thinks his match is. He thinks it could be Nutsa. But he admits he’s not over Cali, and the camera pans to him longingly gazing at Tomas cupping Cali’s ass in the outdoor shower. Dun dun dun.

Outside playing cornhole (not a euphemism), Asia straight-up asks Lewis if he sees her just as a friend. He says “I’m trying to find a word other than friend.” I believe the word you are searching for is “girl I’m stringing along until someone better offers to suck my d*ck.” You’re welcome.

Terry strolls on into the family room because it’s time to push that big red fate button. But! Papa T is so proud of the work they did last week, he has a surprise for them. Fate only gets to choose the guys for the date. Then the guys get to choose the girls they want to take. TBH I think “Fate” might do a better job, but okay Papa T, let’s try it your way.

Fate chooses Brett and Moe. Moe chooses Kayla, and I’m praying all the “tips” Lauren gave him help his game on this date. Brett picks Cali because he wants another chance to try and bang her to see if they’re a match.

For today’s date our motley crew is going out on a catamaran. So basically they just took their binge drinking out on the water. They see some dolphins and now I feel even sadder for Nutsa that Brett didn’t pick her because it seems she speaks their language. I think we’ve figured out the origin of Nutsa’s annoying voice. She’s clearly half dolphin.

On the date, Moe is really heaping the praise on Kayla and when she tells him she’s serious about Cam and isn’t interested in him he doesn’t even say “You’re fat anyways. I never really even liked you, b*tch,” which is a refreshing change from the usual way some men respond to rejection. Totally hypothetical!

After the date, Terry comes back and asks them how it went and Kayla has an orgasm when describing what it was like seeing dolphins. Moe mentions that Kayla has her heart set on Cam, and he respects that. Lewis says that Moe is just a body and isn’t making any attempt to get to know anyone. Um, exsqueeze me? Is that not the pot calling the kettle just a body? It’s like this guy gets one blow job and he acts like he’s gonna single-handedly win them a million dollars. Lewis, my opinion of you is falling fast. It’s then revealed that the group picked Brett and Cali to go into the truth booth.

And they’re not a match! Damn, these people are as bad at this game as I am at actually starting my diet on Monday.

Now it’s time for the match-up ceremony, and it’s a week for the girls to pick. As Bria kindly reminds us, they did a sh*t job of it last time.

Papa T calls Asia up. She’s pissed because Lewis lays next to her every night, which stops other guys from hitting on her, but he doesn’t actually do anything with her.

Asia, let me repeat it a little louder for the people in the back:

Papa Terry calls up Jasmine and Moe and tells them to “step into his office.” Such a dad joke.

And it’s time for the beams of light. The group gets four beams, the same as they did last week. Papa Terry is not mad, he’s just disappointed. It’s time for them to buckle down and find the rest of these matches. He sends them back to the house to really think about what they’re doing here.

Back at the house, Brett and Kenya are telling Lewis he needs to sh*t or get off the pot with Asia. Asia decides she needs a straight answer and pulls him aside.

Well, we all saw that coming, but Lewis, you suck. Asia, you are more beautiful than Cinderella, you smell like pine needles, and your face is like sunshine. And you’re only a little bit of a bully. Don’t let this d-bag get you down.

And that’s all for this week, folks! I’ll see you again this time next week to talk more sh*t on people I don’t know!