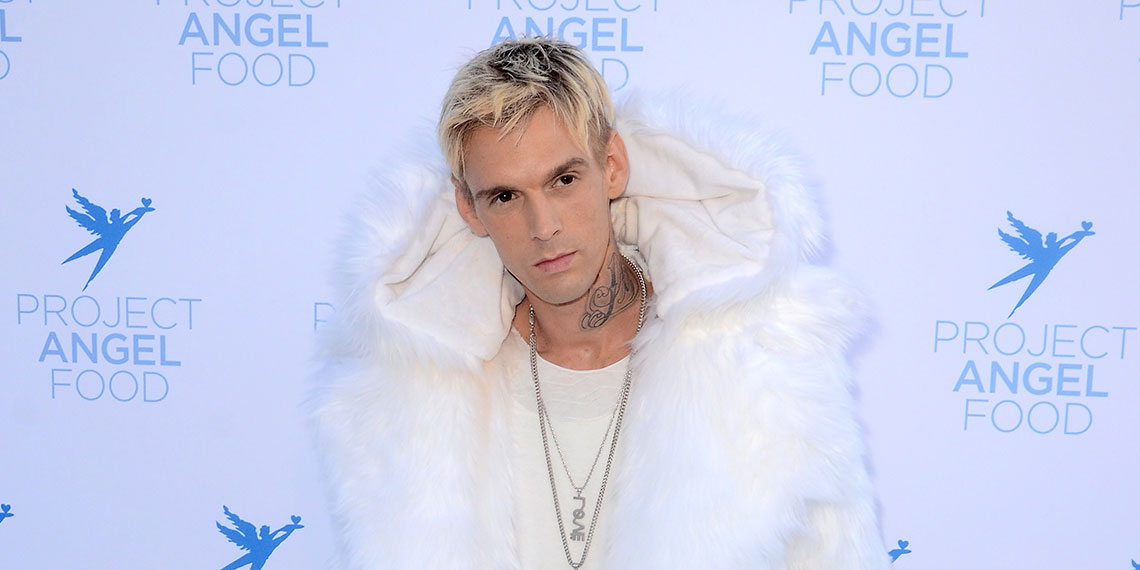 It’s been a while since we last checked in on Aaron Carter, but it looks like things in his life have not gotten any easier since last year. As a refresher, in September, Aaron’s siblings took out restraining orders against him after he allegedly threatened to kill them, and a judge ruled that he had to give up his firearm collection due to mental instability. Simpler times. Well, nothing good has happened yet in 2020, and that trend is continuing here. On Sunday night, Aaron’s girlfriend, Melanie Martin, was arrested for felony domestic violence, and now Aaron is popping off on Twitter about what allegedly went down.

Back in January, Aaron Carter went public with his new girlfriend Melanie Martin, and no one seems to know much about her. Basically every article about the couple just calls her an Instagram model (she has 167k Instagram followers, so this seems like an accurate assessment), and the one notable fun fact about her seems to be that she’s Bulgarian.

She loves me she loves me not, she woke me up from napping but I'm not complaining 🦁

So anyway, moving past the porn stuff, let’s fast forward to this weekend, when something went wrong between Aaron Carter and Melanie Martin. According to TMZ’s report on the incident, the police were called to Carter’s house in Lancaster, CA around 11pm on Sunday, in response to a domestic dispute between the couple. It reportedly began with a verbal argument, which then became physical. TMZ has photos of what look like cuts or scratches on Aaron’s arms. The police determined Martin to be at fault, and she was arrested for felony domestic violence. According to the report, she’s still in police custody as of Monday afternoon, and is being held on $50,000 bail.

On Monday, after TMZ published their story, Aaron fired up his Twitter account to respond to the incident, and later, shared some truly disturbing allegations about Melanie.

In the first tweet, he said that he hopes Melanie “gets the help she needs”, and that “no one deserves domestic abuse female OR MALE.” Before I say anything else: it’s an important message that men can also be on the receiving end of domestic abuse. Whatever happened in this specific situation, that’s something everyone should understand. Then, Aaron hashtagged #Cheater and said “she literally chocked me out.”

so sad, ;( I hope she gets the help she needs. no one deserves domestic abuse female OR MALE #DomesticAbuse #Cheater she literally chocked me out…. i'm devastated https://t.co/Zaxo7zgPbt

In the next tweet, Aaron seemed to explain his reasoning for calling the cops on Melanie, saying that with domestic violence, “all it takes is once” to establish a pattern of abusive behavior.

you don't have to wait for someone to treat you bad repeatedly. All it takes is once, and if they get away with it that once, if they know they can treat you like that, then it sets the pattern for the future.”

But after those first tweets, in which he espoused some important wisdom about domestic violence, Aaron’s tweets shifted in tone. He referenced his past issues with his brother and sister, claiming that he’s the one who is “accused of being a pedophile animal abuser racist”, while his family is busy “making up horrendous lies about me and contacting me knowing if I respond I go to jail.” Basically, he’s accusing his siblings of contacting him specifically to make him violate their restraining orders against him—something which would land Aaron in jail.

After that, he used the hashtag #ScornedWomen, which I don’t know the exact context of, but it doesn’t seem like a flattering way to refer to someone. After reiterating that he hopes she gets help, he then claimed that he “tried to give her a new life,” but obviously things haven’t worked out the way he envisioned them.

#ScornedWomen I hope she gets the help she deserves. I tried to give her a new life.

Rounding out the bizarre series of tweets, he threw out a new accusation against his girlfriend Melanie: that she broke her dog’s leg and didn’t take it to the hospital. Pardon me? He actually tweeted about this a few times, and in the most recent message, he tagged PETA, telling them they “should look into Melanie Ann Martin abusing and breaking her mini poodles leg and not taking it to the hospital.” There’s a lot going on in this situation, and I really hope a dog isn’t suffering because of it.

#DomesticAssault #Felony #DogAbuse she didn't pay anything. balls sugar daddies did. @peta you should look into Melanie Ann Martin abusing and breaking her mini poodles leg and not taking it to the hospital https://t.co/f4fEzh1weG

This afternoon, Aaron spoke to TMZ, saying that Melanie told him she was pregnant right before the argument that led to the alleged assault. He accused her of lying and asserted to TMZ that they would not be getting back together.