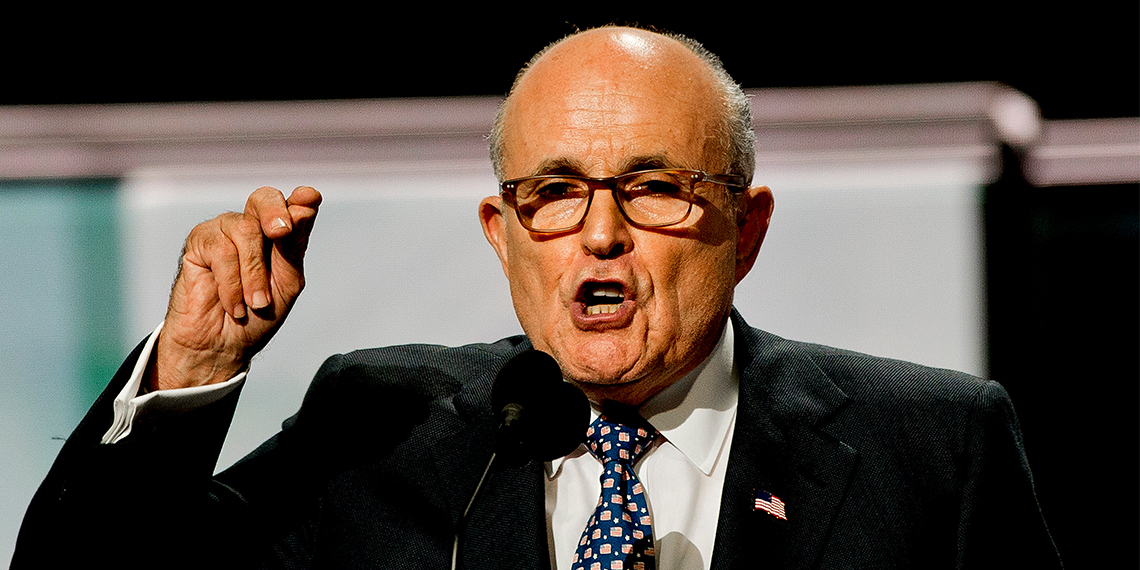 A Complete Rundown Of The Four Seasons Total Landscaping Mess

On Saturday, just as millions of us began drinking to celebrate Joe Biden’s apparent victory in the Presidential election, one of the most instantly memeable moments of all time was being born in Philadelphia. Just minutes after media organizations finally began to call the race, Rudy Giuliani stood at a podium in the parking lot of Philadelphia’s Four Seasons Total Landscaping, shouting about widespread voter fraud (of which no evidence exists). This unbelievable scene is already the stuff of legend, so let’s break down exactly what happened in this real story that is somehow not an episode of Veep or a headline from The Onion.

On Saturday, as President Trump headed to the golf course, he tweeted that his attorneys would be holding a press conference that morning at the Four Seasons Philadelphia. You know the one! The fancy hotel where you got drinks at the bar once, but where you could never afford to actually stay. Turns out the President couldn’t make a reservation there either, and his tweet was quickly deleted after the hotel clarified that no such press conference was taking place. The President soon posted an update, clarifying that the briefing was actually being held at Four Season Total Landscaping.

A quick Google search revealed that the new location was, in fact, a literal landscaping company. Whereas the Four Seasons hotel is just a few blocks away from the Pennsylvania Convention Center, where votes were being counted throughout last week, Four Seasons Total Landscaping is 11 miles away, nestled between a crematorium and an adult bookstore in an industrial part of the city. When this location was initially announced it was hard to believe that they were serious, but the visuals of the press conference, with Trump signs plastered on the side of a dilapidated green building, confirmed that the location was exactly what it seemed.

The immediate narrative that took hold here was that someone on Trump’s team must have made a massive mistake, and booked the wrong Four Seasons. That still seems like a likely possibility, but of course, the campaign would never admit that. On Saturday evening, as most of us watched President-Elect Biden give his speech, Trump campaign manager Corey Lewandowski tweeted praise for Four Seasons Total Landscaping, saying that they “are American Patriots,” and that “All great Americans in PA use” their services. Sure, Jan.

All great Americans in PA use Four Seasons Total Landscaping. They love this country and are American Patriots. Thank you!!

Not everyone is convinced that the press conference’s location was a mistake. Reporting from The New York Times suggests that the location may have been a strategic choice, given that the downtown area around the convention center had been largely overtaken by Biden supporters. Additionally, Four Seasons Total Landscaping, a women-owned small business that has grown substantially in its 27-year history, is also the type of American success story that Trump and his administration like to take credit for. But my favorite theory, which may only exist on Twitter, is that the location just off Interstate 95 was appealing to Giuliani & Co. because it would allow them to quickly GTFO of Pennsylvania after giving their press conference. Probably not a bad idea, considering that more than 80% of Philadelphia County voters chose Biden over Trump.

While another meaningless Giuliani press conference in a hotel lobby would have been quickly forgotten, Four Seasons Total Landscaping is something very different. On Sunday, as we all dealt with our hangovers from the previous day’s celebration, the images of the Trump campaign’s tragic last stand became the biggest joke of the moment, and two days later, we’re still not over it. On Tuesday, an employee from Fantasy Island Book Store, one of Four Seasons’ neighboring businesses, complained to TMZ about Saturday’s commotion, saying that they were given no advance notice, and due to the swarm of traffic, “customers were spooked and couldn’t get to Fantasy Island’s front door.” Fantasy Island isn’t happy with Rudy Giuliani, but the employee told TMZ that “a check from Giuliani for a few hundred bucks would make things right.” Uh, good luck with that.

But while Fantasy Island may have missed out on potential profits due to Saturday’s press conference, Four Seasons Total Landscaping is suddenly reaping the rewards of their weird involvement in this whole situation. The owners of the landscaping business quickly capitalized on the attention, rolling out online merch and posting numerous updates on their Facebook page, thanking followers for their support, and adding that their phone lines are “blowing up with calls from the conspiracy theorists.”

And of course, most importantly, the memes and tweets about this bizarre event have been absolutely on fire. In a Twitter poll from @jpbrammer that received more than 60,000 votes, Spirit Halloween was chosen as the ideal location for a campaign’s last stand, though my personal choice would be the alley behind SUR.

One of Melania Trump’s only tangible projects as First Lady was redoing the White House Rose Garden, which had kept the same design since Jackie Kennedy’s time in the 1960s. Her new garden design received lukewarm reviews when it was unveiled this year, and some are hopeful that Dr. Jill Biden will restore the Kennedy-era landscaping. If she does decide to take on this project, she knows who to call…

We’ve heard that the sex shop customers were caught off guard by Saturday’s press conference, but just imagine those poor gardeners who wanted to pick up some supplies to do their weekend yard work. I would probably need therapy if I showed up to buy fertilizer and saw Rudy Giuliani yelling about dead people voting.

Obviously, a lot of important news has happened in the last few days, but we won’t forget about the poetic chaos of the Four Seasons Total Landscaping press conference any time soon. I’m just waiting for the next family Zoom with my conservative relatives, so I can bust out my new Zoom background—can’t wait!