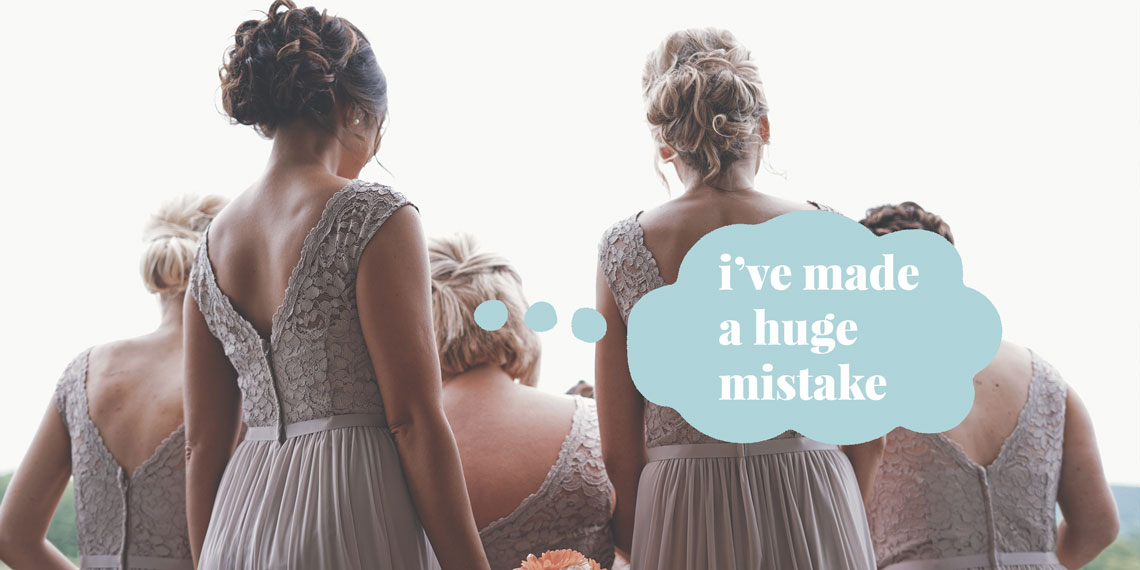 8 Things Nobody Tells You About Being A Bridesmaid

Yayyyyy your bestie is totally getting married. It’s time for you to suck it up, throw on a questionable dress, wake up at 4am to have someone jam bobby pins into your scalp, and take part in several different bridal things that will all blur together by the time the bride and groom run through that sparkler line. Supporting the bride as a bridesmaid is like, one of the rules of feminism. But there are several unknowns and, frankly, scary aspects to being a bridesmaid that you may not know about. Here are a few things nobody tells you about being a bridesmaid.

I know my bridesmaids watched me pass out on a floor, get up, barf (while giving a thumbs up), then proceed to shed all my clothing. Get ready to shower the bride—like, literally give her a shower—after she spills a drink on herself or gets little too sloppy. Maybe she’ll try on her lingerie in front of you all. Who knows. Just remember: pics or it didn’t happen.

I don’t care what the bride tells you. “Oh you can totally cut this into a cute tea-length cocktail dress.” I could, but I won’t. Tell me when chiffon goes with anything. Tell me. Just buy it and accept that this will hang in your closet until you choose to donate or burn it.

It could be a passive-aggressive tiff or a full-on drunk screaming match that gets you kicked out of the dueling piano bar. It’ll be entertaining if you aren’t involved. If you are involved, though, take it from me—hair pulling works really well when you’re trying to make a point. You heard it here first. Don’t @ me.

4. The Bride Will Go Crazy

Yep. She’ll either be crying because daddy won’t let her have an open bar or because Aunt Zelda isn’t coming or because she can’t lose those last three pounds. Or she’ll scream at you because you wore ivory to her shower. Maybe she’ll demand you pay $800 for the shoes she needs you to wear. It doesn’t matter. At some point, the wedding demons will overcome her, and she will lash out at you and everyone she loves. Don’t make her madder, fam.

Wedding dresses are a b*tch to potty in. You’ll need to hold it up for her while she yanks her Spanx down and hover-pees during the wedding. You’re there to be a supportive friend.

6. You’ll Never Talk To Half These Girls Again

Like, no, you aren’t REALLY besties with the groom-to-be’s cousin or the bride’s roommate from college. You just have to pretend to be for the year leading up to the wedding. You’ll see each other hammered; you may spoon while you’re drunk. You may even talk about how you’re sooooo glad you’re finally meeting and you’re totally gonna hang out this summer. You won’t. You’re forever bound by this f*cking wedding and the ugly dresses you’re all sporting, though, so that’s something.

I don’t care if you boofed all the drugs and got too f*cked up during the rehearsal dinner to party during the wedding. It’s your job as a bridesmaid to dance, make all the other guests dance, take shots, and assure the bride and groom that this is LITERALLY THE BEST WEDDING EVER. Leaving early is not an option. Suck it up, buttercup.

Like, if the bride is asking you to buy a $1,000 dress or demanding you come to her bachelorette party in Mexico or that you buy her a $200 massage a day before the wedding, don’t feel like you have to just cause you signed up to be a bridesmaid. I mean, try not to be the b*tch that’s saying no to everything (“I can’t wear these shoes cause they don’t match my complexion” is different than “I really don’t want to cut my hair into a pixie cut so that you’re the only one with long hair”), but if you feel like the bride is completely out of control, it’s okay to check her.