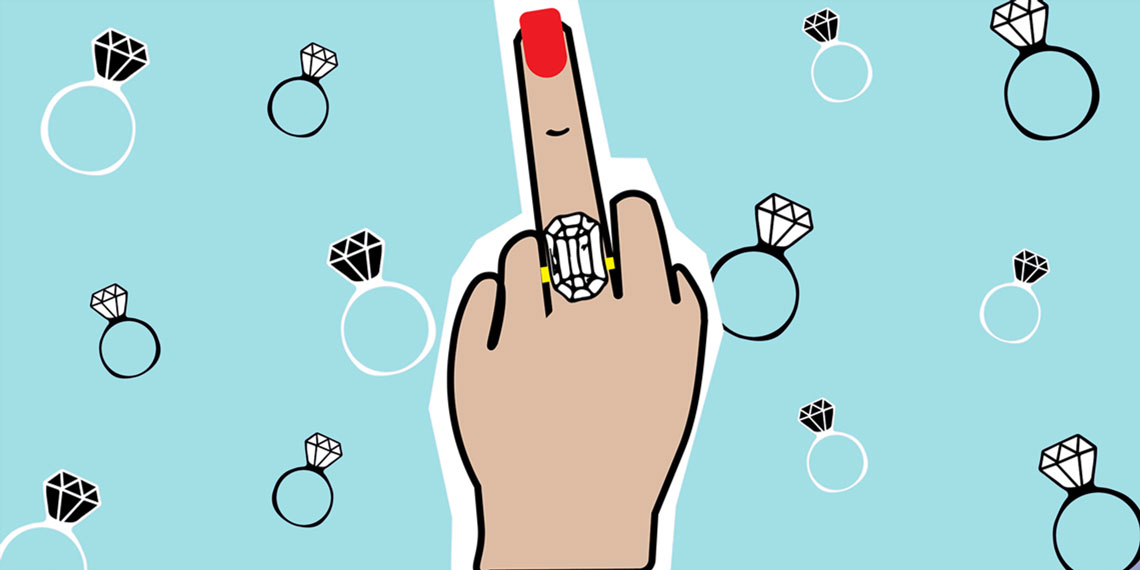 The Internet Is Unfairly Dragging This Bride Who Fired Her Bridesmaid

If you know me (which, given the statistics I’ve gathered, puts you at about a one in five chance), you know that I love a good hate read. That’s why, when I clicked on an article from Elle titled, “Bride Fires Bridesmaid in Painfully Awkward Email, and the Reactions are Brutal”, I was psyched. This article, I thought, would combine some of my favorite elements: bad friends, bridezillas, psycho emails, and savage comebacks. I mean, really, there’s nothing quite as satisfying as reading a crazed email from a deranged person and suddenly putting your entire life into perspective. So I clicked the article, ready to tear this bride to shreds in a subsequent opinion piece.

But what I got was not the unhinged, aggressive ramblings of a bride who’s only been eating cheese cubes every four hours for the past three months. What Elle delivered, in my opinion, was a pretty well thought-out, well-intentioned (if not slightly awkward) email from a bride who was under a lot of pressure and put in a bad position. And what did the internet do? Rip this woman to shreds for no reason.

But I’ll back it up a bit. The letter starts off introducing our jilted bridesmaid, Courtney Duffy. Elle writes, “Some time ago, Alex asked Courtney to be a bridesmaid in her wedding. Courtney, presumably considering Alex a good friend, agreed, even though she lives across the country and is currently pursuing her MBA at Dartmouth (per Courtney’s Twitter bio).” Ok, seems fair. Kind of setting us up for this Courtney girl inevitably flaking, because why bother mentioning the MBA and living across the country otherwise?

Elle continues, “As the wedding drew closer, Alex wanted the full bridal experience, complete with a bachelorette weekend and full attention from her bridal party on the day of the event.” I mean, call me a shallow b*tch, but this all seems pretty fair. You ideally only get married once. If a bride wants the “full bridal experience” and a bachelorette weekend (gasp), she should get it. Also, I think “full attention” from your bridal party on the day of the event is literally in the job description. Actually, it’s in the name itself! You are the bridesmaid. The maid of the bride. If you are not prepared to go to a bachelorette weekend or at least help the bride on her wedding day, don’t sign up to be a bridesmaid. It’s that simple. I don’t like how Elle is painting Alex as some demanding toxic person for asking some very reasonable requests of her so-called closest friends on a very important day of her life.

Apparently, according to Elle, “Courtney, struggling to balance her school commitments and the wedding, juggled things around and made it work, but informed Alex that she would have to fly on Sunday night (which is apparently the night of the wedding).” And this is where they lost me. If you’re talking about an evening wedding and an evening flight and you have to get to the airport two hours before your flight, how exactly would Courtney even make it to the wedding at all? Is she The Flash? Literally rule number one of being a bridesmaid is that you are supposed to be at the wedding. It’s so simple! And yet so difficult for Courtney. And we haven’t even gotten to the supposedly horrible email the bride sent yet.

So, given that Courtney A) didn’t seem to want to come to the bachelorette weekend B) could barely attend the actual wedding, it makes sense that Alex would ask her to not be a bridesmaid. Which brings us to the email. Did Alex curse Courtney out? Call her a bad friend? Un-invite her from the wedding altogether? No, no, and no. Here is Alex’s email.

I’m so glad to hear you booked flights! I’m sorry classes are taking such a long time to sort out. I know how hard you’re working to be here for the wedding and it means so much to us!

I have a massive favor to ask you, though — and this is one of the hardest things I’ve ever had to ask anyone — but I need to ask you to relinquish your duties as a bridesmaid.

Come to the wedding, have a fabulous time, and travel in the time you need to without stressing about anything else!

When I asked you, I was really hoping that you could be a part of this whole thing — the bachelorette trip, at least the weekend, prep and the full night of the event (a Sunday night flight means you won’t even be able to be there for the whole wedding)… the whirlwind nature of what your travel has become just won’t work with the duties as a party member. I’m so, so sorry!!

Please don’t feel you’re letting me down, I am asking you to do this. I love you and value your friendship so much and I fully understand the need for you to prioritize school! I want you to be able to focus on that without also worrying about any extra wedding worries.

And I know this is incredibly awkward, but there is a possibility that I might be able to have someone else step into the role and assume the duties. Could you please mail the jumpsuit to me? I’ll Venmo you the postage and the cost of the jumpsuit — just let me know the total.

I know everyone is looking forward to seeing you there! I know I am!

And if you’d like to chat on the phone, let me know! I promise we’re totally cool!

All my love,
Alex

Me, after reading this:

Okay, so… what exactly is bad about this email? This seems pretty courteous, given how difficult the topic is. Alex acknowledges scheduling is hard for Courtney and although she asks her to relinquish her bridesmaid duties, she welcomes her to come to the wedding. I mean, the jumpsuit bit is a little awkward and could have been covered in a later email, but otherwise I feel like this was handled with as much tact as possible in the situation.

Should Alex have called Courtney? Yeah, probably. But how do we know Courtney wasn’t dodging Alex’s calls and texts under the guise that she was “too busy with schoolwork” (or that she actually was too busy with schoolwork)? It’s not like they could have gotten coffee, since, as we were informed earlier, these women live across the country from each other. Barring a phone call, email was probably the best option, since saying all this through text would have (more rightfully) earned this bride the wrath of the internet.

Overall, this is pretty sh*tty to do to Alex. I’m sure Courtney, when she tweeted JetBlue asking for a refund for the cost of her plane ticket to the wedding, didn’t expect her tweet or story to go viral. But she put it out in the internet, and it did go viral, and then she supplied Alex’s email to media outlets. So now Alex, Courtney’s supposed “friend”, is getting dragged across the internet while also trying to plan a wedding and replace a bridesmaid. Nice. Real nice. I don’t know, maybe Courtney’s response to the email has something to do with why she was asked to step down in the first place?