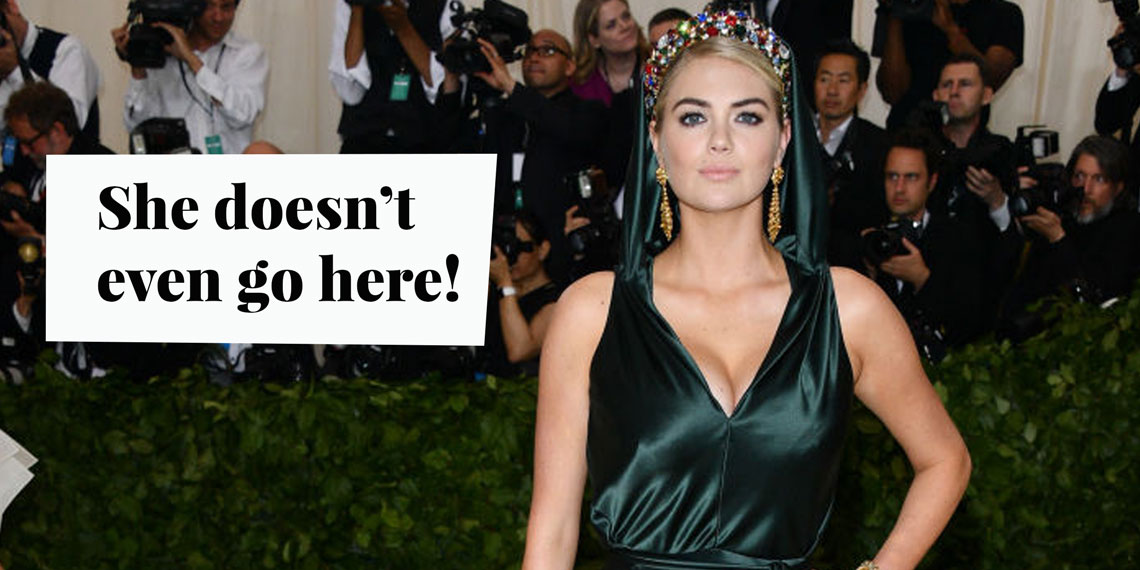 As we all know, the Met Gala is fashion prom. But unlike the real prom where they begrudgingly let the nerds attend and, like, breathe, that is not the case here.  This prom is strictly for the in-crowd. That’s right teens, it doesn’t get better, only more exclusive. But on the bright side, I do get to judge the outfits of pretentious celebrities from the comfort of my bed, so who’s really the winner? Naturally every year we have the regulars that show up—Rihanna, Katy Perry, Madonna, Sarah Jessica Parker, The Olsen Twins, etc. You know, super famous people. But there are always a few randos that slip into the party like they’re me in Taylor Kitsch’s DMs and make us wonder, what the fuck are you doing here? So, without further ado, here are the attendees I can only assume snuck in to the Met Gala 2018 with the caterers.

Can anyone tell me with great authority who Rita Ora is and why she is famous? Like I’ve been trying to figure out for years why anyone gives a shit about her when we could better spend our time talking about, like, Nicolas Cage. And don’t you dare say it’s because she’s in the 50 Shades of Grey movies unless you want me to slap you.

Kate Bosworth has literally done nothing relevant since Blue Crush. Which I love, don’t get me wrong, but does that really merit an invite to fashion’s biggest party 15 years later? I know she likes to think herself a real fashionista, but just because you wear leather pants and a poncho to the airport doesn’t mean you are a visionary. TBH I think she must have donated a vital organ to Anna Wintour or something because she is almost always on this list. That, or she has some sort of elaborate blackmail plot.

Hi, Amber! While your performance in Magic Mike XXL was RIVETING and INSPIRED, I’m not really sure what else you have going on? I can only assume Amber got this invite for putting up with that dickwad Johnny Depp for the last few years. She didn’t even get to marry him while he was still hot, just abusive. Anyone would need some fun and approximately 7,000 showers after that.

Normally I wouldn’t think much of a model on the Met Gala stairs—they’re a dime a dozen—but I take particular issue with Kate Upton being there. Kate has had her chance to go to the Met Gala before, and she brought nothing interesting to the table. In fact, she once wore a different ugly green dress that kind of looks like this year’s dress without a hood. It surprises me Anna Wintour gave her another chance, but it doesn’t surprise me she squandered it.

I was confused by Kris’s appearance only briefly, and then I had a revelation. At a party where the theme was Heavenly Bodies, of course the devil herself would show up.

And there you have it! Was there anyone else there you all were surprised to see? Hit me up in the comments, I most likely won’t answer, but if you’re funny I’ll give a nod of appreciation at my desk.