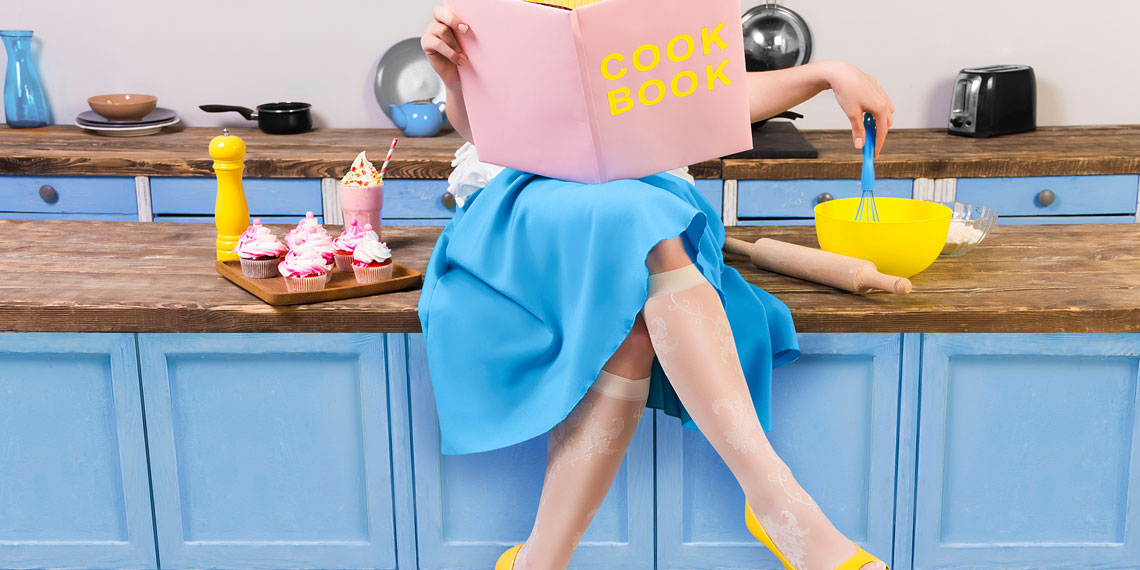 Thanksgiving—or, as I like to call it: Dinner in Hell—is nearly upon us, which means soon not only will you have to pretend to like your mother’s gluten-free stuffing, but you’ll also have to put up with the black cloud that descends upon your family dinner table once a year in the form of your nosiest and most racist relatives. Gotta love the holidays! There’s nothing quite like trying to shove a second slice of pie down your throat while also having to explain to Aunt Sally that, yes, you’re still single and  thriving. Luckily for you betches, I may have found a way for you to come armed to the  party with some crazy material to f*ck with your Aunt Sally and any other relative who likes to hold the rolls hostage until you divulge your five year plan. And it comes in the form of 1950s dating advice.

Yes, 1950s dating advice. You see, the other day I was messing around on the internet and avoiding answering any emails that would require me to actually do something to earn my paycheck, when a friend sent me the most hilarious and batsh*t article I’ve seen in awhile (shout-out to @ Sweetest Betch You’ll Ever Meet for always coming through with the best internet trash!). Apparently, a woman randomly found a women’s magazine from 1958 with a cover story on “129 Ways To Find A Husband.” The 1950s dating advice ranges anywhere from “mildly frowned upon” to “I’m calling the goddamn police,” so naturally all 129 pieces of wild advice was posted onto the internet for the public to judge and ridicule. I encourage everyone to read the article in its entirety because it’s absolute GOLD, but since I don’t have all day to sit here and individually mock every piece of advice, I’m just going to list my favorites, mmkay?

I know this seems aggressive to start out with, but this was literally #6 on the list. NUMBER SIX!! I don’t know what’s more suspicious: that ladies back in the day were showing up to other women’s funerals dressed like they’re about to sock hop right over their competition’s dead bodies to sleep with their newly singly husbands, OR that there were enough funerals happening for this to be commonplace advice. Either way, I’m afraid to ask my grandma.

Lol clearly the person who wrote this has never spent any time with the New York subway system. I’ve literally seen people sitting in their own feces ride from Bushwick to Midtown without a single person asking them “are you okay” or even “do you need me to call you an ambulance,” let alone actually hitting on them. I’m just saying.

“Don’t room with a girl who is a sad sack and let her pull you down to her level.”

First of all, I am the sad sack in the group and I find that statement personally offensive. I may or may not have earned the nickname “Moaning Myrtle” from my friends because instead of blacking out and taking home a hot stranger, I prefer to black out and request the DJ play “Wrecking Ball” while weeping into my vodka cran. BUT THAT DOESN’T MEAN I DON’T KNOW HOW TO HAVE A FUN TIME, OKAY.

“Go to all reunions of your high school or college class. There may be widowers there.”

“Don’t be afraid to associate with more attractive girls; they might have some leftovers!”

Okay, wow. Reading this doesn’t at all make me want shove my head in an oven. I guess the people behind this list are trying to say that attractive people will be able to set you up with guys?? Lol. I don’t have one friend, attractive or otherwise, who has set me up with anything less than 2018’s Quasimodo. PLEASE.

“If he’s rich, tell him you like his money—the honesty will intrigue him!”

This is assuming that you can find a single, attractive guy whose net worth amounts to more than a six pack of Bud Light. Considering the last eligible man I encountered was the human equivalent of a crumpled bag of Doritos, I’m not optimistic that those men are even real. BUT assuming you can find one, then Venmo yourself $1,500 when you’re putting your number in his phone. Just to show him you’re serious!

And, finally, my personal favorite….

“Stand in the corner and cry softly. Chances are good that he’ll come over to find out what’s wrong.”

Funnily enough, this is actually my state of being after 1am, and I can’t say that it’s gotten me anything other than a wide f*cking berth from the male gender. Except from the bouncers who like to come over and tell me I’m “killing the vibe.”

So there you have it, Aunt Sally. I’ll be doing my part this year by crying in the corner more often. Now, can you do your part and stop tagging me in Facebook posts about when you should give up and freeze your eggs? Thx.