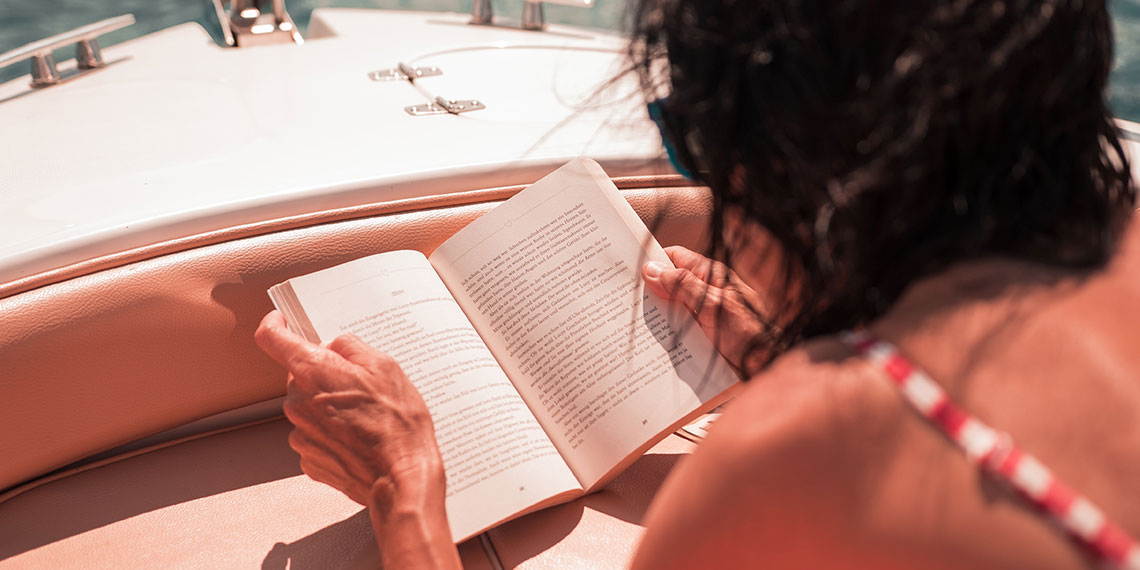 15 Instagrammable Books To Read This Summer

Before this weird excuse for that season we used to call summer ends, it’s about time I publish my list of the best books to read solely for your IG aesthetic. That’s right, I’m talking about my annual Instagrammable books roundup! They say don’t judge a book by its cover, but that’s exactly what we’re doing here. But don’t worry, because the books themselves are obviously worth reading.

This book has been described as Mad Men meets Big Little Lies, which is funny because the cover is very Little Fires Everywhere. And for good reason, I think! It starts when a fire (Little Fires Everywhere) destroys the office of a prestigious ad agency (Mad Men) and three ambitious women all find themselves under the microscope, since each of them has a motive for revenge.

‘The Golden Cage’ by Camilla Läckberg

Truthfully, I opened this book and was already not excited: woman marries super-rich, handsome guy who is clearly abusive but she’s too blinded by his looks and status to see it, then she’s left high and dry when he leaves her for a younger model? Yawn—or so I thought. What makes The Golden Cage not cliche, and, actually, a gripping page-turner, is that protagonist Faye is incredibly smart, with a dark past of her own. She won’t go down without a fight, and not before her ex-husband’s life is ruined.

‘A Burning’ by Megha Majumdar

Told through three different points of view, this beautiful novel is a debut for the ages that you’ll fly through in one sitting. Themes like class, fate, corruption, and justice make this book perfect for your summer reading list as three unforgettable characters with big dreams find themselves entangled in the wake of catastrophe in contemporary India.

Fudging the requirements of this list a bit because the paperback is what’s new this summer, but I’m still counting it. And who wants to lug a hardcover to the beach anyway? Diaz’s debut earned her the 2019 Whiting Award, as well as a whole slew of critical praise, so you know it’s good. The memoir chronicles her upbringing in housing projects of Miami and Puerto Rico. She was, by her own admission, a runaway, a high school dropout, a suicide risk, and a street fighter. She was also the queer, biracial, displaced daughter of an absent father and a mother who struggled with mental illness.

‘Sex and Vanity’ by Kevin Kwan

From the king who brought us Crazy Rich Asians, Kevin Kwan is back with a dazzling love triangle that’s sure to spice up your summer. It follows Lucie Churchill, who is torn between her WASP-y fiancé and George Zao, the man she adamantly denies having feelings for (so relatable). This book gives those of us stuck inside our studio apartments a look at fame, fortune, and travel, all while taking a jab at racism and snobbery.

‘One To Watch’ by Kate Stayman-London

If you watch The Bachelor, this book is the takedown we’ve all been waiting for, and Stayman-London is hardly subtle about it, which I love (ABC is called ABS in the book, Fleiss is Faust, need I say more?). In One To Watch, plus-size fashion blogger Bea Schumacher gets drunk one night and writes a scathing hit piece on the Main Squeeze franchise’s lack of diversity, which goes viral overnight. But then, ABS does a surprising thing: they ask Bea to be the next Main Squeeze. Fun, sexy, and full of heart, you’ll devour this book in a day.

‘The Safe Place’ by Anna Downes

Emily Proudman just lost her job, her acting agent, and her apartment—all in one day. Rough. To say the least, she’s desperate. But when she runs into Scott Denny, the charming and successful CEO of the company she just got fired from, he offers her a summer job at his remote French estate that seems too good to be true. Her summer starts out totally Instagrammable, filled with plenty of day-drinking by the pool with Scott’s wife Nina and their mysterious daughter Aurelia, but soon, Emily realizes that Scott and his family are hiding something. If she doesn’t stop snooping, things may turn deadly.

‘The Boys’ Club’ by Erica Katz

I’m not even a lawyer, but this book feels so quintessential Big New York Law that anyone who even has one friend who went to law school will probably find this relatable. Alex Vogel has always been a high achiever who played by the rules: Harvard Law School, prestigious job at the biggest law firm in NYC, longtime boyfriend. But soon she gets seduced by the money of big law and the charm of her coworkers… and suddenly she might want to take a walk on the wilder side. When an incident reveals the dark culture of the firm (you can probably guess what), Alex is thrust in the middle and forced to decide between keeping her job and friends and doing the right thing.

‘The Death of Vivek Oji’ by Akwaeke Emezi

When a mother in southeastern Nigeria opens her front door to find her son’s body wrapped in colorful fabric, it sends a shockwave through the family. The Death of Vivek Oji explores the electrifying story of one family’s struggle to understand their mysterious child and a heart-stopping act of violence that changes their lives forever.

‘Love After Love’ by Ingrid Persaud

After her abusive husband dies, Trinidadian native Betty Ramdin and her son, Solo, take in a lodger, Mr. Chetan, and the three eventually pull a Modern Family and form an unconventional bond. But one night, Solo overhears his mom spill a secret, causing him to flee all the way to NYC. Mr. Chetan continues to love and support his adopted family—until a secret of his own is revealed.

New Yorkers, I dare you to not find this novel relatable af. Edie is stumbling around her 20s, sharing an apartment in Bushwick, hooking up with the wrong people, working a job she doesn’t care about. But then she meets Eric, a digital archivist in an open marriage with a woman who performs autopsies for a living. (I always said the next time I’d open up to someone would be on an autopsy table…) Edie then finds herself unemployed and invited to stay in Eric’s home—though not by Eric, by his wife. And then sh*t gets compliated.

‘You Had Me at Hola’ by Alexis Daria

Telenovela lovers unite! For those of us who have felt empty since Jane The Virgin ended, You Had Me at Hola is the cure. After Jasmine Lin Rodriguez goes through a messy public breakup, she returns home to New York City to star in a new bilingual rom-com. Jasmine is determined to be a leading lady who doesn’t need a man, but when she gets partnered with telenovela hunk Ashton Suárez, they both end up with more than they bargained for. Will their mounting feelings for each other upend their lives?

‘A House Is A Body’ by Shruti Swamy

Even people who are “not short story people” (me tbh) will find themselves captivated by A House Is Not A Body, which has stories ranging from a young painter living alone in San Francisco who begins a secret romance with one of India’s biggest celebrities to an exhausted mother who watches as a California wildfire approaches her home and more.

‘The Heatwave’ by Kate Riordan

The cover is so gorgeous I can’t stop staring at it. And once you pick up this gripping thriller, you won’t want to put it down. Sylvie Durand has tried to forget La Reverie, her paradoxically named country home in the French countryside. Let’s just say, bad things have happened there. But when a fire calls her back to care for the property, she’s forced to confront the past she wants to put behind her. And that means confronting the memory of her first daughter, Elodie: beautiful, manipulative, reminiscent of one of the Manson girls, gone by age 14.

‘His Only Wife’ by Peace Adzo Medie

So this isn’t out until September, sue me. That’s what preorder is for!! So. Set in Ghana, His Only Wife is like a Crazy Rich Asians for West Africa. It follows Afi Tekple, a young seamstress, who is arranged to marry Eli, the successful son of her family’s benefactor. Score. Eli’s family agrees to the marriage because they want to get him away from his mistress, and Afi and Eli marry sight unseen (*Love Is Blind voice*), meaning Eli isn’t even at the wedding. Afi moves into his luxury apartment, gets used to her fancy new lifestyle, and finally meets Eli. The problem? Eli doesn’t magically stop caring about his mistress just because he’s married. *Pretends to be shocked*