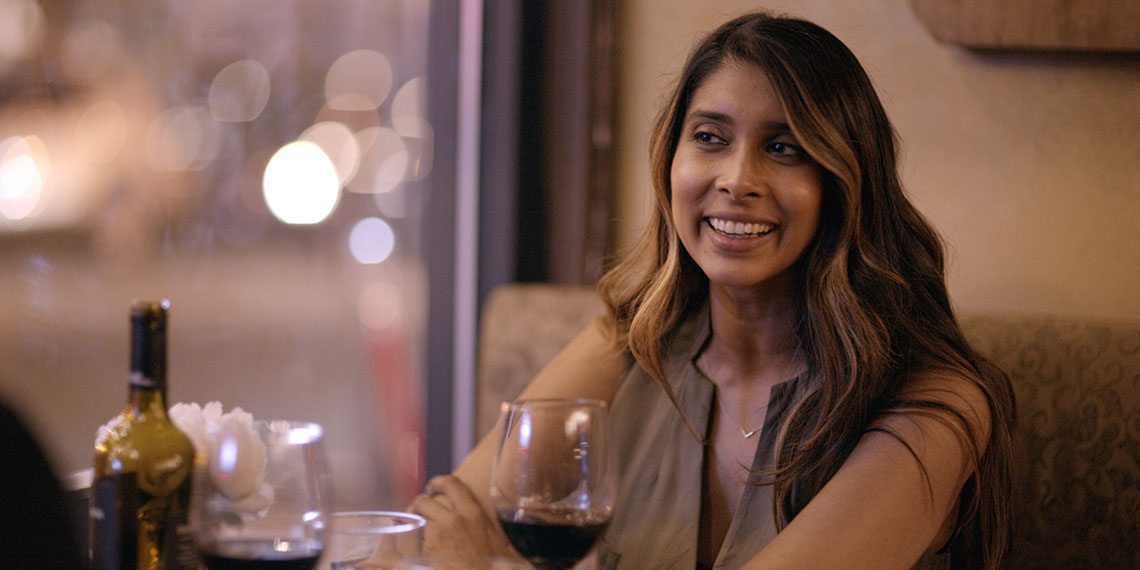 Arranged marriages are still happening in 2020, and while Indian-American families are loosening the reins on arranged marriages and allowing their children to find a partner on their own, matchmaking is very much still a thing. Is traditional matchmaking better than Tinder, Bumble and Hinge? Netflix has set out to find out on their new unscripted series, Indian Matchmaking. The show revolves around a well-known matchmaker from Mumbai, Sima Taparia, who helps millennials of South Asian descent find love.

By the end of episode one, we instantly became obsessed with Nadia Jagessar. She’s a New Jersey native and runs her own business, Euphoria Events, planning weddings including some with up to 750 guests. Her charismatic, bubbly personality and openness (she talks about having her period during one of her confessionals) had viewers rooting for her.

Betches sat down with Nadia to discuss everything Indian Matchmaking, how it played out with her final match Shekar, and what she’s taken away from the show.

Although Arranged Marriages Are Still A Thing In Her Culture, Nadia Has Never Been Forced Into One

In the first episode, matchmaker Sima Taparia from Mumbai explains that an arranged marriage in India is simply called marriage, and then when it’s not arranged it’s called a love marriage. Nadia says she has never received pressure from her parents to get married or find a partner who is Indian—they’re open to everyone.

Nadia tells Betches, “Matchmaking and arranged marriages are very much still a thing for Indian-American people. You still have the extreme where you don’t have any say. majority of the community is moving away from that and giving their kids an option now. My mom and I are very close, so if she brought someone to me and said ‘I think this person is a good person, I know their family,’ I would definitely consider it. She hasn’t done it before, but who knows if she will now. She wants what’s best for me so I’ll give it a try and trust her instincts.”

A hard scene to watch was learning that within her Indian community, it’s been a lifelong struggle for Nadia to feel fully accepted. While her heritage is Indian, her family roots are in Guyana (in South America) and she’s born and raised in New Jersey. “Growing up, I did Bharatnatyam and folk styles of dance. In college, I was on the Raas and Garba Team (aka Rutgers RAGA), and after college I joined a professional Bollywood dance company called AATMA Performing Arts and they do Bollywood fusion. A lot of my friends are Indian, but there’s always been this weird disconnect between me and them. I was doing all of these things to keep me connected to my roots, but I never was fully on their level. Making a face, people ask me why I don’t speak Hindi,” she explains.

For many Indian men, even the Indian-American ones, being from Guyana is an immediate deal breaker when it comes to finding a mate. Nadia says, “My background has always been an issue, especially when it came to dating. He’d say ‘I need a “guju girl”’ (a girl whose family is from the state of Gujrat in India). She could be a terrible person, but just because she’s guju it makes her better than me? People don’t take the time to learn about Guyana and our culture to see that there are so many similarities, and that was the struggle I’ve had my whole life.”

With an unannounced departure from the show after episode 4, we wish we got to see more of Nadia in the later episodes instead of bringing new people in. Not seeing any of the final edits of the show until it was available to the world, there were some details that didn’t make the final cut.

Nadia tells Betches, “I actually had a fourth match, and they unfortunately cut that out. He was my third match, before Shekar. That one didn’t really go anywhere. I had more of a friend vibe and not so much romantic . Also I shot a really nice scene with my brother but that was cut out completely…he was bummed. Otherwise Netflix really captured good touch points of everything else. I feel like they covered my life pretty fully.”

“Shekar and I aren’t together anymore. We continued dating a month or so after the show, but unfortunately it ended right after that. I actually really liked him—but he ended it. I secretly think he got back together with his ex-girlfriend but I cannot confirm nor deny that, it’s just what I think,” Nadia says.

Throughout the filming of the show, Nadia didn’t feel any pressure from Sima, Netflix, her family, or anyone else to stay with one of her matches. She chose to hang out with her matches like Vinay and Shekar on her own time after filming.

Nadia tells Betches, “I haven’t done matchmaking before this experience, but it’s not magic and you can’t just give Sima your wishes where she pulls a husband out of a hat. I understood why she gave me the matches she did, but the chemistry just wasn’t there to carry through in most cases. I also don’t know if my matches were as serious as I was about the process.”

She Left The Show Still Single And More Confident Than Ever

Nadia says jokingly, “I have not gone back to matchmaking since the show, and COVID has done none of us any favors in the dating realm.” We watched Vinay stand Nadia up not once, but twice. Whatever his excuse was it seemed super shady and something that we all can relate to. While she didn’t find love on the show, Nadia did find confidence that she didn’t know she had, refusing to settle.

“With Vinay, it was really important for me to stand up for myself because honestly two times getting stood up is a red flag. My time is just as important as yours and it’s not fair to me, so I stood up for myself and hope that people watching the show will stand up for themselves too in similar situations. I wouldn’t call myself a doormat, but I’ve always been like ‘oh it’s ok you messed up 400 times and broke my heart 400 times that’s okay’. But that’s not okay. I became more confident in my decisions and making sure that people respect me and being strong enough to say ‘no, what you did was wrong and you shouldn’t treat me like that. I’m not gonna take that from you,’” Nadia says.

While we’re unsure if there will be a Season 2, it most likely will have a completely new cast except for Sima. Fans of the show have been tagging Mindy Kaling on social media to cast Nadia for season 2 of Mindy’s Netflix hit Never Have I Ever—and we’re here for it!

Nadia concludes, “Although none of the matches on the show were successful, it shouldn’t be a sign that matchmaking is a failure. This process is hard. Finding love is not easy.” She adds, “It’s okay to be emotional when you have your period!”

Overall, she says, “I’m grateful for this opportunity and to represent Guyana on such a huge platform.”