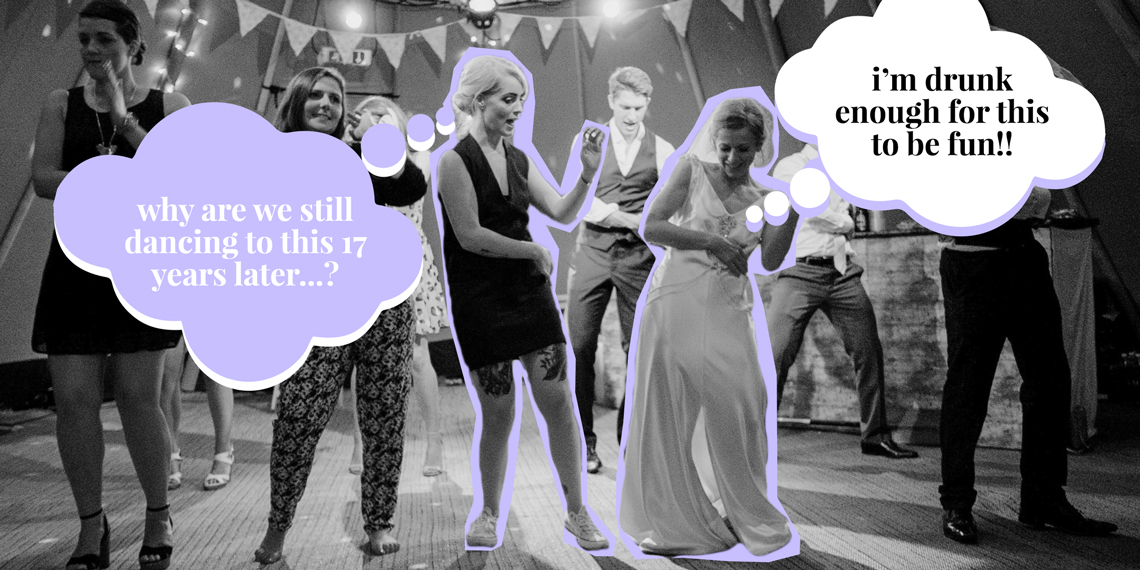 10 Overplayed Songs That Should Be Blacklisted From Every Wedding

Whether you’re planning a wedding, or you’re simply the kind of person who enjoys experiencing extreme anxiety over things long before they happen, let me introduce you to an issue you may have been unaware of. You’re probably going to want to blacklist certain overplayed songs from playing at your wedding. The same way allowing the aux cord to slip into the hands of a friend with questionable music taste can ruin an Uber ride, allowing your annoying cousin to request a shitty song can kill the vibe at your wedding. I’ve been going to a lot of weddings lately, and I’ve heard the same terrible repeat offenders—and let me tell you, hearing a song you hated on the radio 3 years ago is a mood killer. Here are 10 overplayed wedding songs you should tell your DJ, or whoever is in charge of music, to blacklist immediately.

I’m going to kick off this article on overplayed wedding songs without taking any prisoners. “Happy” by Pharrell Williams makes me want to punch things, and there’s no way I’m the only one. Playing this song essentially turns your wedding into a Carnival Cruise commercial, and that’s a bad look.

Playing this song at your reception is the wedding equivalent of the time you posted “feeling 22” as a caption on your 22nd birthday. It’s overdone, you’re too old for that, and you can be more creative. Just… do better.

I’m surprisingly so down for the Cotton Eyed Joe, Electric Slide, and most other organized group dances, but the “Cupid Shuffle” is one you can skip. It’s not moron-proof enough. Some people will know it really well and dance unnecessarily seductively while others (like, your older relatives) will flail around in confusion. Also, nobody looks coordinated during the “walk it by yourself” portion.

This song is for hardos and Lifetime movie promos. It’s just annoying and extremely overused. Like, we all just sat through a ceremony watching you and your beloved promise to love each other forever. We don’t need to waste precious time when we could be dancing to a Lil Jon song from 2004.

Colbie Callait has successfully built a pretty nice life for herself out of creating songs that play at Hobby Lobby and TJ Maxx. No shade, I wish I had the skill to do that, too. Anyway, unless you want to make people feel like they’re purchasing discount soaps at your wedding, you should prob not play this song.

“Blurred Lines” is the song that every event DJ plays while he decides to try to pump up the audience. It’s like, every aspiring DJ knows that he should be 1) wearing a fedora 2) be named Jason and 3) shouting vague party terms at a crowd that’s finally starting to get drunk while “Blurred Lines” by Robin Thicke plays in the background. We all lived through the infamous “Blurred Lines” consent controversy of 2013, right? Do you really want to rehash this debate at your wedding?? Didn’t think so.

This song is basically the same thing as “Blurred Lines”, except DJs tend to play it a little bit later in the night, and Taio Cruz isn’t as creepy as Robin Thicke. (That we know of.)

Picture this. In 20 years, you’ll be getting drinks at a PTA mixer, and literally every other mom is going to be like, “Oh my god, ‘Perfect’ by Ed Sheeran was your wedding song, too? No way!” and you’ll be the cool drunk mom who took my advice in your 20s and picked a better song. You’re probably also few drinks ahead of everyone else.

I know that people think it’s cute to play this for the single girls at the wedding, but maybe you should save everyone the embarrassment and blacklist this song instead. You never know who that one too-drunk bridesmaid will be that’s going to steal the show and act inappropriately towards her ex. Hot take: Reminding your single friends that they’re alone at your wedding is a dick move anyway.

Chill. You just got married like, five minutes ago, and should maybe hide your crazy for a little bit longer. There’s really no buzzkill quite like kicking off your marriage with a list of things your new husband isn’t allowed to do.