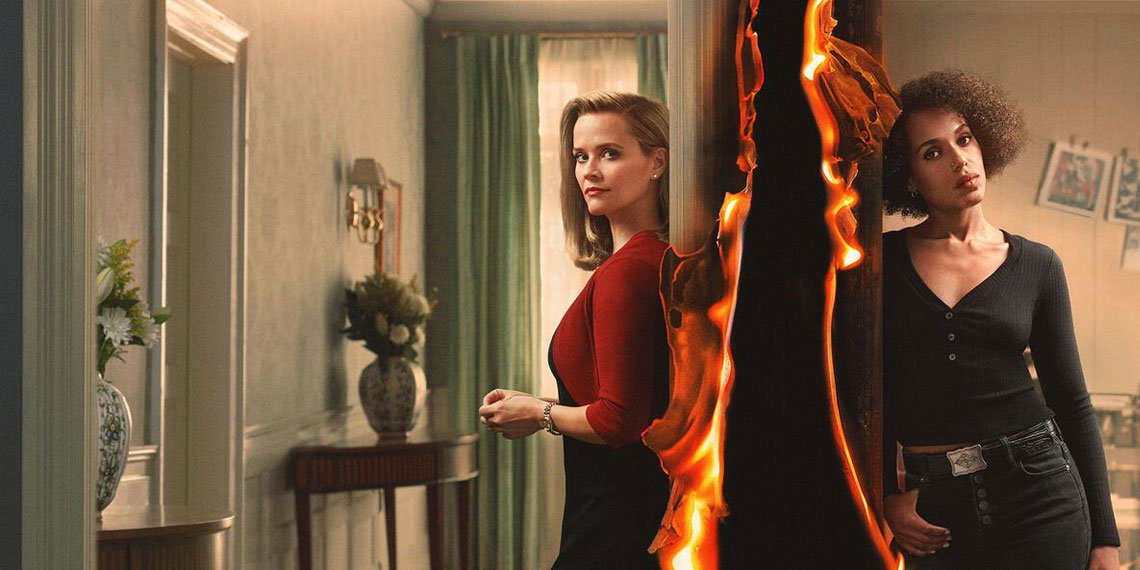 The obsession with Little Fires Everywhere started in 2017 with the release of the novel by Celeste Ng—a book that just about every book club had at the top of their reading list. Filled with drama, strong leading ladies and small-town suburban drama, it was no surprise that it quickly became one of the biggest books of the decade. Now, the queens Reese Witherspoon and Kerry Washington are bringing it to life with their new Hulu series based on the book. If you can’t get enough of this enticing storyline, and need something to read while you’re stuck at home for the foreseeable future, you’ll live for these 10 unforgettable novels.

Picture this: your husband goes missing on a fishing trip, is presumed dead, and then you find out he was having an affair. Tragic. For the main character in The New Husband, Nina Garrity, this is her reality and she’s doing her best to move on a year and a half after the strange disappearance that left her a widow. Trying to move on with a new man, Simon Fitch, everything seems like smooth sailing. But when her daughter raises concerns about him, Nina begins an investigation into Simon that will send her reeling—we’re talking Dirty John level secrets.

2. The Care and Feeding of Ravenously Hungry Girls by Anissa Grey

No matter how close sisters Althea, Violet and Lillian are, they never imagined that one of them would be arrested and put on trial for stealing money from a charity (who does that?!). Now left to care for Althea’s twin daughters and wrestling with the idea that the woman who raised them is a criminal, the family begins to fall apart, member by member. With plenty of family drama, a fire, and difficult mother-daughter relationships, this book gives us serious Little Fires Everywhere vibes.

3. The Opposite of Fate by Alison McGhee

Mallie Williams was feeling on top of the world until a terrible assault left her in a coma. The worst part? Her attacker got her pregnant. By the time she regains her strength and comes out of the coma, her family will have made a decision that will change her life forever. Filled with hopeful messages about life and the decisions that alter the way we look at the world, Mallie Williams proves to be the ultimate badass in Alison McGhee’s latest novel The Opposite of Fate.

4. Such A Fun Age by Kiley Reid

Alix Chamberlain is a certified boss, living a life full of success and confidence (So… can we all be Alix?). Living a predominantly great life, she’s completely caught off guard when her babysitter, a young black woman named Emira, is accused of kidnapping her child at their high-end grocery store. When a video is released of the horrific incident, Alix knows she has to do something to make the situation right. But the video brings someone from Alix’s past back into her life, forcing all of her plans out the window and putting her completely out of control for the first time in a long time.

5. Queen of the Owls by Barbara Linn Probst

When college professor Elizabeth innocently poses for nude photos, the only thought in her mind is how these photos will bring her one step closer to her hero Georgia O’Keeffe. Instead, the seriously creepy photographer who took the photos exploits Elizabeth, publishing them for the world to see. Unable to persuade him to take the photos down, Elizabeth does her best to embrace the situation and help others understand why she did it in the first place. If you’re trying to get in touch with your inner feminist spirit this spring, you’ll love Elizabeth and Queen of the Owls.

6. The Gifted School by Bruce Holsinger

Said to be the book “that predicted the college-admissions scandal,” (The Wall Street Journal) you better believe The Gifted School is full of juicy private school drama. Four families have known each other for over a decade, raising their children together and happily living side-by-side in their quaint community. But then an exclusive new school for gifted children opens up and suddenly, the parents of these four families turn against one another, doing whatever it takes to get their children into the most prestigious school in town—and setting a horrible example for their kids in the process.

College sweethearts Marin and Derek were living the dream before their son Sebastian was taken. Over a year later, the police no longer have any leads in the case, leaving Marin to hire a private investigator to continue digging. But unfortunately for Marin the plan backfires as the PI learns Derek is having an affair with a woman… a much younger woman. Like any reasonable woman who’s been betrayed, Marin begins to contemplate what it would take to break them up for good and it isn’t long before she begins to explore ways of getting her out of Derek’s life permanently. Yikes!

Isobel Johnson has never claimed to be a perfect teacher and tries her best to fly under the radar, avoiding the sometimes-crazy class parents. But all of that hits the fan when she introduces a fairly liberal lesson to her class and she begins getting threatening calls from her students’ parents. Simultaneously, helicopter mom Julia has just been trashed by her fellow moms for making an error while casting the school’s winter musical. Banding together, Isobel and Julia quickly find out just how toxic privileged schools like Liston Heights High can really be.

9. A Hundred Suns by Karin Tanabe

Ever wonder what Little Fires Everywhere would look like as a historical fiction novel? We’ve got you covered! Moving to Vietnam with her husband in 1933, American Jessie Lesage has absolutely no idea what to expect. With scandal surrounding her husband and his connection to the Michelin rubber fortune, she knows she needs to keep up the visage of the perfect wife. Determined to make a real life for herself in Vietnam, she befriends local woman Marcelle de Fabry. What Jessie doesn’t know is that Marcelle is in support of giving the Michelin plantations back to their rightful owners, a secret that will severely threaten Jessie, her husband, and their success.

Good neighbors can be hard to come by, and no one knows this better than single mother Valerie Alston-Holt in A Good Neighborhood. A professor of forestry and ecology, Valerie has everything she could ever want: a bright son headed to college soon, a tight-knit community, and a beautiful home. Things are obviously too good to be true for Valerie (or else this wouldn’t be a novel) and soon, the Whitman family moves in next door and immediately starts to disrupt her life. First, the family completely demolishes the house they bought, building a monstrosity, then they find themselves arguing over a historic tree in Valerie’s yard. But worst of all, Valerie’s son has fallen for the Whitman’s daughter, causing all Hell to break loose. If you think you have bad neighbors, this book will reassure you of how good you have it!