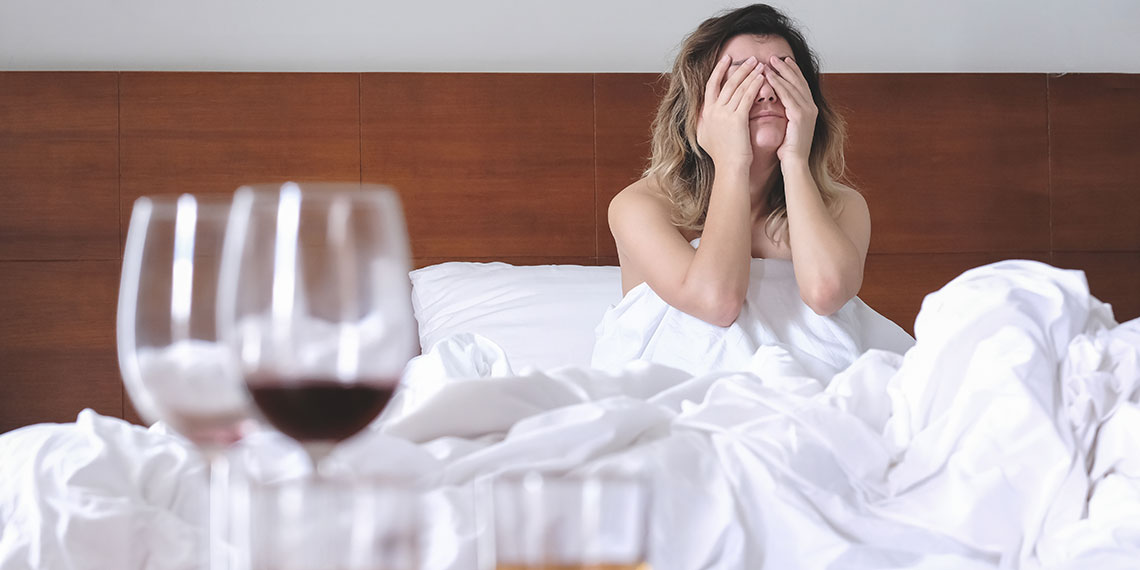 Raise your hand if you’ve ever been personally victimized by vodka. Seriously, have anyone else’s hangovers gotten significantly worse after the age of 25? It used to be as easy as going out, throwing back a nauseating amount of jungle juice and cheap liquor, and bouncing back after a greasy breakfast sandwich and a quick power nap. Now, it’s two glasses of wine and a headache for the next three days. I used to pride myself on the fact that I wasn’t a “puker”, but after I hit my mid-twenties, just a couple rounds of skinny margs would be followed by hours of holding my hair back the next morning. What gives? Are we just getting weaker in our old age, or is it possible that we’ve forgotten how bad our hangovers really were when we were younger?

Looking back at old Snapchats from college, all we see are the blurry videos of the nights of our youth, and not the mornings after that we spent throwing up and vowing to never drink again. So is it us, or is it science? As it turns out, there are valid medical reasons for why we can’t stomach our hangovers as well as we used to, excuse the pun. In addition to my own personal “research” (drinking), I reached out to some medical experts to provide some much-needed insight on why hangovers feel worse as we get older.

Even if you don’t drink, it’s pretty safe to say that everyone is familiar with what a hangover is. Generally, it’s a day of sickness, complaining, and overall misery that follows a night of heavy drinking. But what are hangovers, medically speaking? I spoke with integrative physician Dr. Taz Bhatia, who broke down the science behind hangovers. Dr. Taz says, “The technical name is veisalgia and refers to a syndrome of symptoms post-alcohol—headaches, fatigue, nausea, vomiting, and focus issues.”

I don’t know about you, but I always feel more justified when I can put a medical term to my woes. Saying “I have veisalgia!” sounds way more serious than just saying “I’m hungover,” and therefore warrants more sympathy instead of judgment from your friends and family. Dr. Taz adds, “Many of these symptoms are most likely from detox pathways getting overworked along with leaching of key nutrients like B vitamins and amino acids.”

Have you also noticed that, as you’ve gotten older, regardless of what or how much you’re drinking, your hangover the next day is exceptionally dreadful? Take solace in knowing that you’re not alone, and that you’re not imagining this; your hangovers really are getting worse as you’re getting older. I’ll give you a moment to go yell “I told you so!” at whoever mocked you for being a wimp during your last hangover. Dr. Jason Burke, hangover specialist and founder of Hangover Heaven IV Hydration, says, “Yes, hangovers are getting much worse as we age. I say that when people are 20 years old, hangovers last one hour, when you get to age 30 they last all day, and once you become over 40, they become a multi-day experience.” So, something to look forward to. Yay.

So why do hangovers get worse as we get older? “Because the body’s reserves are worn down—and there is often not the nutrient reserve, immune reserve, and given time—a greater accumulation of toxins that stress liver function,” says Dr. Taz. Yet another reason to begrudge getting older, enzyme activity in your liver decreases as you age; therefore, your body might not be metabolizing alcohol as well as it did when you were younger. And as we get older, our percentage of body water also decreases, which can increase our blood alcohol concentration (even when we drink less), thus giving us worse hangovers the next day. Furthermore, Dr. Burke explains, “As people age, their ability to rebound, heal, and recover becomes less. As your body ages, it loses its regenerative functions. A hangover is a physical insult to your body. This is why you feel so bad. So, when you are 20 years old you rebound from anything faster, including hangovers. Unfortunately the only thing that gets better with age is wisdom.” Ironically, I think I need a drink to help come to terms with this bitter fact.

Ready to resent your hangover and men, even more? In addition to getting worse with age, studies have also suggested that women experience more severe hangovers than men. To add even more salt to the wound (sans the tequila), Dr. Burke says that women may begin dealing with harsher hangovers at around age 27 or 28, whereas men may not start to experience issues until age 30 or 31. So I guess alcohol is sexist now, too. As to why women have more intense hangovers, Dr. Taz says, “There are studies that show that women have slower detox pathways and therefore don’t metabolize alcohol as well.” I seriously feel betrayed by my body right now.

Dr. Burke adds, “Women experience worse hangovers than men, mainly due to nausea and vomiting. This can be incapacitating. Women tend to get more nauseous and men tend to get more headaches with hangovers. Most people can function to a certain degree with a bad headache, but if somebody is vomiting uncontrollably, there is really nothing else to be done.” Sad, but true. Personally, I recommend aiming your vomit at a guy so that they can be just as upset and miserable as you are. Balance restored.

How To Help Your Hangover

Just because you can’t stop yourself from aging doesn’t mean that all hope is lost. There are still preventative steps you can take to help ease the severity of your inevitable hangover. For starters, the type of alcohol you choose can play a role in how much you suffer the next day. We probably all know this already, but in case you don’t, Dr. Burke advises, “Darker alcohols definitely cause worse hangovers than clear alcohol. And cheap alcohol causes worse hangovers than high-end alcohol.” Sounds like top shelf shots all around! Dr. Taz also recommends loading up on B vitamins, vitamin C, and staying hydrated. So, while you might not be able to fully prevent a hangover, you can still do your best to soften the blow.

Additionally, Dr. Burke relays, “The best way to not end up feeling like death warmed over the next morning is to have a plan when you go out. Especially if you are near age 30 or older.” Basically—and I know nobody wants to hear this—know your limits. You can’t expect to drink five vodka sodas and miraculously feel fine the next day, no matter how much vitamin B you pound. Sorry!

As for drinking an abundance of water as a means of warding off a hangover, Dr. Burke says it can help, but only to a small degree: “If you have had 12 shots of Jagermeister, you can drink all the water you want and you will still feel like death in the morning. It will help somewhat, but it does not resolve the neuro inflammation, nor the oxidative stress.” Harsh, but fair. I mean, drink the water; you’re probably dehydrated anyway. Just don’t expect it to work a miracle.

On the chance that you find yourself in a situation where one drink turned into five and you didn’t take any pre-drinking precautions, don’t beat yourself up. It’s going to happen. Just go for any of your tried-and-true hangover hacks and try and remember that this feeling won’t last forever. Hydrate yourself with electrolytes, and sleep it off knowing that your hangovers are getting worse as you age, it’s just science—sorry!