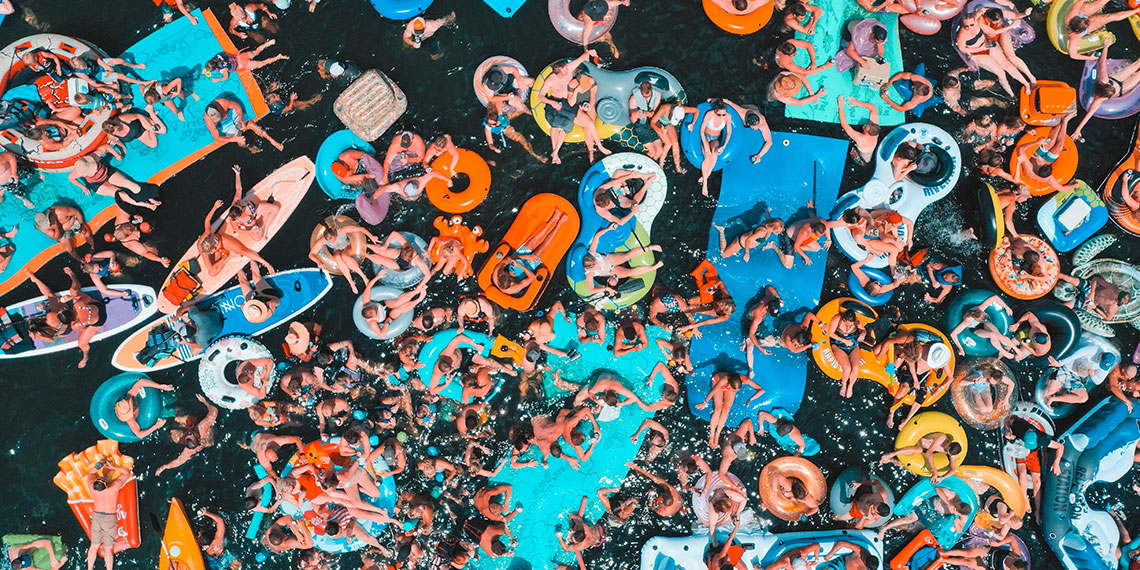 Why Are People Posting On Social Media Not Social Distancing? An Investigation

We’re more than two months into quarantine as we help flatten the curve to get back to life as we knew it, but I’ve been seeing some alarming stuff on my Instagram. Like many of us, I haven’t seen my friends since March since I’m practicing social distancing,  but as I’m sitting in my house, I tap through Instagram stories filled with rule breakers. I’m talking about influencers traveling across the country, people attending in-person baby showers, barbecues on the lake, and college parties. Honestly, like…what the f*ck?

For me, this is personal. My sister, a NICU nurse, has self-isolated herself from her 11-year-old son since March because of this pandemic, but you’re going to go to a party because you don’t want coronavirus to ruin your social life? Ok.

NY Governor Cuomo recently said that the current rise of cases in New York City is not from essential medical staff and other workers, but rather, from people who are leaving their homes to shop, exercise, and socialize. Trust me, I don’t want to be self-quarantined any more than you do, but we have to do our part if we ever want to get the f*ck out of here. But what I don’t understand, though, is if these people are being selfish and not following social distancing rules, why would they then take a video of it and post it on their social media for everyone to see? I’d think that if you were doing something wrong, you would want to hide it, not flaunt it.

And this, my friends, is the beginning of our investigation: Why are people posting on social media and not social distancing? Many DMs later, I found some social distancing rule breakers and interviewed them, and also consulted a psychologist for her expert analysis. Let’s meet the culprits.

Since the start of the lockdowns, influencers have been in hot water over quarantine, putting out half-assed apologies on their IG stories (hi, Arielle Charnas), and that trend is not stopping. We’ve all seen the jokes about how quarantine is going to show us who’s really a natural blonde, but a number of influencers are taking that really seriously. Recently, Bachelor alums Amanda Stanton and Corinne Olympios broke quarantine to drive hundreds of miles to get their hair done, and they’re far from the only offenders. We came across one influencer, Serena Kerrigan, who posted an entire video explaining to her followers that she’s getting her roots done (still not an essential service in New York). She says “don’t come after me” at the end of this video, but people came nonetheless.

Kerrigan chose to break social distancing rules because, as she explained via Instagram stories to her 56.4k followers, she “hates seeing her roots on camera.” Forget the pandemic, people dying, and families that can’t say goodbye to their loved ones, this girl’s roots are showing!

Dr. Purvi Parikh, allergist/immunologist with Allergy & Asthma Network, warns that the problem with meeting up with others (whether it be for a roots touch-up or to have a picnic in the park), even when following social distancing guidelines, is that “you do not know where the person has been in the last two weeks, who they have interacted with.” And while you could take certain precautions, like, as Dr. Parikh explains, asking “if they or anyone they have been in contact with has traveled, had fever, tested positive for COVID-19, or had other symptoms like a cough in the last two weeks”, she ultimately concludes, “anytime you interact with anyone, it is a potential risk.”

Kerrigan says in the video that she made sure the woman who came to do her hair had been isolating, and that they were going to wear gloves and masks and “take all the necessary precautions”.  Amanda Stanton and Corinne Olympios, however, did none of that, and photographed themselves at a salon with not a single mask or glove in sight.

While neither Olympios nor Stanton outright encouraged their followers to go on an interstate quest for highlights like they did, and Kerrigan ends her video saying, “I’m not saying that you guys should do this, I just am going to do it”, the reality is that influencers can make an impact, positive or negative, on their followers with every post. While they may think that they’re only putting themselves at risk by bending the rules, they may unknowingly be swaying their followers to break social distancing rules too. This is why we can’t have nice things.

I want to note that no one is winning in this pandemic. We’re all making the best of this awful situation. It really sucks for college seniors who are not able to experience their last semester together or walk at graduation—these are moments they’ll never get back. But as tough as it is, it’s not an exemption to break social distancing.

Earlier this month, a group of more than 20 graduating seniors all traveled down to their college in South Carolina. Allie and her friends have been posting their last hurrah escapades, and I asked her why she was posting, knowing that the rest of the country is following quarantine guidelines and watching closely to call out those who aren’t. She tells me, “At first I didn’t post and I would get annoyed seeing my friends’ posts. I saw more and more posts of kids hanging and completely ignoring the rules. As the weeks went on, I started breaking the rules too because it made me so angry seeing everyone else having fun. We went down to school for the last two weeks because we didn’t want graduation to be taken away from us.”

Among close friends, she felt peer pressure to resume the life she had. Allie says, “I wanted to maintain my social life as we all just wanted a sense of normalcy. I felt a strange pressure to show my followers that I was having fun with our happy hours despite being in quarantine. I wanted to keep up with the quantity of content that I was used to posting before the virus.”

While Allie didn’t receive any backlash personally, she feared that people were talking behind her back. Hypocritically, she adds, “In my group chat with my close friends, we would discuss different people’s Instagram and Snapchat stories and bash them if they were not social distancing. We were definitely judging anyone who was not being ‘safe’ by our standards.”

Max’s Instagram stories consist of him and his friends playing soccer on a turf field, even after NJ parks have been shut down. He tells me that the police were called to the scene to ask them to leave on numerous occasions, but they kept returning.

While he doesn’t feel pressured to post about his illicit games, this New Jersey native tells me, “Soccer for me is a way to decompress, long before quarantine happened. For my mental state I need my escape, and if people have a problem with that I honestly don’t really care.”

Dr. Parikh says, “Soccer and other sports where there can be physical contact are especially risky, as usually people are spreading the virus more when physically exerting themselves—breathing heavier, coughing or sneezing outdoors, and from physical contact with sweat, there is potential for viral spread.” She recommends wearing a face mask while playing sports, maintaining a 6-foot distance, and if you’re meeting friends in a park, “do not share blankets—everyone will likely need their own.” But above all, she says, “I would avoid sports with close physical contact.”

With an invincible mentality, Max has no intention to stop going to the field with his friends. “If I get it, I get it. If I die, I die,” he says. “I’m not blaming anyone else. We all know the risks and potential problems that arise. I’m so sick of everyone on Instagram acting like they’re suddenly a doctor now trying to tell me how to live my life.”

What The Psychologist Says

Dr. Joanna Petrides, a licensed clinical psychologist and assistant professor at Rowan University School of Osteopathic Medicine, specializes in anxiety and human behavior. She acknowledges that everyone is trying to maintain a sense of normalcy right now, and says, “These three people highlight the desire to engage in activities which energize us, lift our spirits, give us a boost in self-confidence, and help us to find comfort and balance in our lives while publishing it on social media. Unfortunately, these same activities are also putting ourselves at risk and there is a really selfish undertone to the reasoning behind it. Many of the people breaking the restrictions have stated they accept the consequences of becoming ill and were willing to take that on.”

It’s fine, I guess, to not have any regard for your own life, but that mindset conveniently ignores the real reason we social distance: to protect others. “What we’re not hearing is the awareness that they could unknowingly spread this illness with tragic effect after indulging in a seemingly minor activity,” Dr. Petrides warns.

“If enough influencers start breaking the rules or enough people post about social gatherings on social media, then people are going to think, ‘If they’re doing it, why can’t I,’ which was exactly what Allie said was her influence,” she adds. “And when this level of groupthink is present, the desire to fit in with others we relate to can lead to additional problematic decisions and inadvertent consequences of spreading infection when it could have been prevented.”

So, given the potential for blowback, why go out of your way to expose yourself breaking the rules? Dr. Petrides weighs in: “As we saw in the example of the influencer, there’s a push to not let down followers and still try to stay relevant.” She also considers, “being controversial is one way we stay on followers’ radars.”

“Lastly, there’s also a desire for attention during an isolating period like what we are currently experiencing. One way to express, demonstrate, and minimize effects of loneliness and facilitate discussion is through posting on social media and spurring reactions in others. Even if it creates negative attention towards the person posting, it still satisfies our need for attention and provides a break in the loneliness felt.”

Am I the only one who feels like we’re all in one giant group project, where some people are doing all the work to flatten the curve while others just goof off? That, and the whole “do anything for attention, even if it’s negative attention,” feels very middle school. But even though some people care more about likes, replies, and keeping up with their social media presence than potentially getting COVID-19, and a pandemic with over 100,000 deaths and counting in the United States isn’t shaking them, I did find that a lot of people are with me, doing good and following the rules while helping others however they can. Hopefully, we will continue to course-correct the rule breakers to get back to the 2020 we originally anticipated.