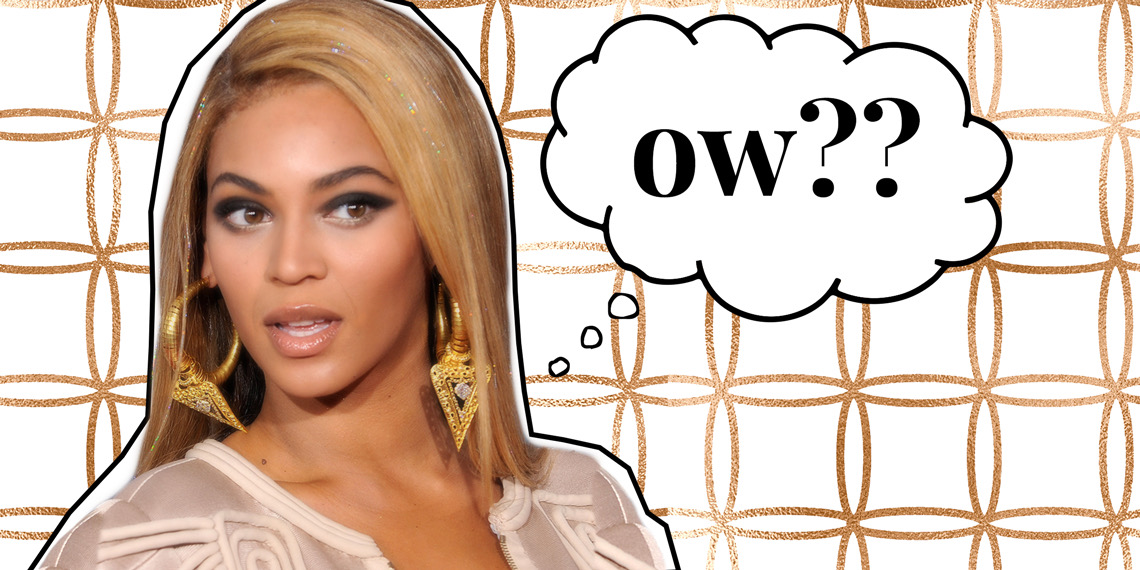 We Think We Know Who Bit Beyoncé In The Face

It’s been less than a year since Tiffany Haddish rose to fame in Girls Trip, but she’s wasted no time giving us some incredible Hollywood stories. In a new interview with GQ, she spilled the tea on Beyoncé allegedly getting bit in the face at a party by a deranged actress, and I need so much more information. Obviously the A-list stars aren’t going to snitch on each other, so I’m taking it upon myself to speculate wildly as to who bit Beyoncé in the face.

Let’s go over what we know. According to Tiffany, the whole incident went down at the afterparty for one of Jay-Z’s concerts. The biter in question was allegedly on drugs, and she was annoying people all over the party. She even told Tiffany to stop dancing—the fucking nerve! Tiffany posted an Instagram selfie of her and Beyoncé on December 22, meaning that all of this drama must have taken place after the concert in Inglewood, CA on December 21. Call me Olivia Benson, I’m a fucking detective.

There’s no way to know every single famous person who was at this party, but the internet has put together a decent list. Here’s who we know was there: James Franco, Rihanna, Sanaa Lathan, Queen Latifah, Sara Foster, G-Eazy, French Montana, Diddy, and Jen Meyer. This is an eclectic mix, so let’s do some analysis to make sense of it.

@beyonce was telling me that my wig was slipping…. ???? But for real she told me to have fun and I DID! #SHEREADY #thelastblackunicorn #beyonce

First of all, Tiffany said it was an actress, so that narrows it down a bit. Rihanna, Queen Latifah, Sara Foster, and Sanaa Lathan, congratulations, you are still in the running towards becoming America’s Next Top Biter. So first of all, I think we can rule out Rihanna. Yes, she’s been in movies, but is there really anyone who would refer to her as an actress? She’s solidly in the “singer who acts” category, but definitely a singer first. Rihanna, you’re out, auf wiedersehen.

And then there were three. Honestly, I don’t believe that it was Queen Latifah. She is a poised, mature woman, and she seems far beyond the point of casually biting Beyoncé. I hereby eliminate her from consideration in the who bit Beyoncé mystery. So that leaves us with Sanaa Lathan and Sara Foster, two C-list actresses who could definitely benefit from getting their names in the press a little. Sara Foster is best known for a recurring role on 90210, while Sanaa Lathan has spent most of her career playing supporting roles in mediocre movies. Oh, and Love & Basketball.

Both of these women have responded on social media to their names coming up in the biting scandal. Sara Foster laughed at the thought that she could get that close to Beyoncé, while Sanaa Lathan denied the biting, and said that if anything it would have been a love bite. Sweetie, that’s called a hickey.

Chrissy Teigen got involved in the story by tweeting about it, saying that there was only one person who she could imagine being to blame. Later, Chrissy found out the actual culprit, and it wasn’t who she thought. Chrissy’s Twitter account is often a source of humor, but right now I need it to be a source of information. Does Chrissy Teigen think Sanaa Lathan is the worst? Does this mean Sanaa didn’t do the biting??? Or maybe our two confirmed guests aren’t to blame at all. Maybe it was someone else. So WHO BIT BEYONCE?? The world needs answers.

I AM NEVER TELLING I’m scared I’ve said too much KNOWLEDGE IS A CURSE!

Twitter was quick to come up with a wide range of ideas, and some are better than others. Taraji P. Henson was an early favorite, but Tiffany Haddish shut that down, responding to a tweet saying it wasn’t her. Thank god, now I can sleep at night. People also suggested Jennifer Lawrence, but it’s confirmed that she was in New York, not LA, when the biting occurred. I’m also going to go out on a limb and say that it probably wasn’t Chrissy Teigen, unless she was completely blacked out and is now subtweeting herself. Honestly, stranger things have happened. Gwyneth Paltrow was another popular guess, and I can sort of get behind that. Gwyneth seems like the sort of tightly-wound person who could so some drugs and just go fucking nuts for a few hours. I’m not saying she did it, but it seems like a possibility.

Unless Tiffany or Chrissy decide to open up about the biting, the identity of who bit Beyoncé in the face will probably remain a mystery. Unfortunately, there’s just no way to know exactly which actress did some drugs on December 21 and went to Jay-Z’s party and ended up biting Beyoncé in the face. But whoever you are, please be advised that you are immediately and permanently canceled, and you better not show your fucking face in America ever again. Also, I’m pretty sure Tiffany Haddish will never be allowed near Beyoncé again. I hope she enjoyed it while it lasted.

Update: Multiple sources have confirmed to TMZ that Sanaa Lathan is, in fact, the one who bit Beyoncé. Damning information includes: Sanaa is an actress (as Tiffany Haddish described the biter to be), she was reportedly at Jay-Z’s 4:44 after-party in December where the bite took place, and Beyoncé and Sanaa are friends, meaning she’d be able to get close enough to commit the alleged biting. Though Sanaa Lathan sort of denied it on Twitter earlier this week (but really, that denial sounded more like an admission of guilt to me), we’re still standing by awaiting orders from our Overlord, Queen Bey. Bey, just say the word and we will… flood her IG comments with bee emojis, or whatever it is people do as retaliation in these situations.