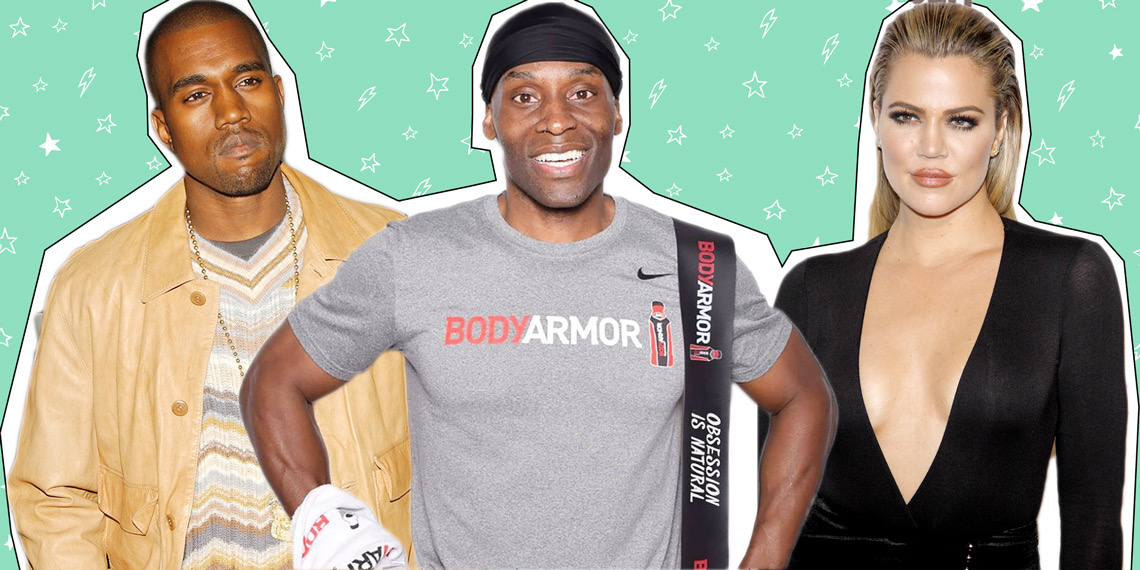 We Asked The Kardashians’ Trainer, Don-A-Matrix, How They Work Out

You may have never been to a workout class with Don-A-Matrix, but you’ve definitely heard of his clients. The LA-based trainer trains the likes of Kourtney and Khloé Kardashian and Kanye West. So when we got the opportunity to talk with Don about his celebrity clients, his workout routine, and his favorite sports drink, BODYARMOR, our reaction was an immediate “okurrrr”! Read on.

How did you become a celebrity trainer to some of these huge celebrities?
I’ll make this story very condensed. So I moved to San Diego in 2001 when I started my training career… in charge of the San Diego football players, and I had a few athletes from the San Diego baseball team… And then I got called up to do the movie Transformers here in Hollywood, which I was training some of the cast, like Josh Duhamel, Tyrese Gibson. So after that was over, those guys moved me to Hollywood to continue to work with them. I started training Fergie—of course, she’s a member of the band Black Eyed Peas. I started traveling with her, I started training the whole band. We were on a world tour with those guys and then one person led to another and now some of my current roster right now would be the Kardashians as we speak. My journey, from athletes to entertainers, still continues.

I read that your workout is set up like a sports game. Is that because you were training athletes?
The method I derived is from when I was training my athletes, because basketball and football games are set up in quarters—by first quarter, second quarter, third and fourth quarter—so I started conducting my workouts as such… We do two exercises each quarter, and we do those two exercises for three sets. And we do that within a 45-minute span each exercise, anywhere from 10-20 repetitions. So that ended up working pretty good, so when I moved to the entertainer side, when I moved to Hollywood, I continued to do that method even with the entertainers. Some of those guys played sports in high school, but they’re not even playing a sport, they understood the concept of the method… us doing very well, even with the entertainers, because now they’re more pressed to go through the method than just clock watch a 45-minute hour workout. And they end up working out really well that way.

That leads into my next question—our readers are really big Kardashian fans. Are you able to tell us a little bit about what some of their favorite moves or exercises are?
Yeah, absolutely. So taking my method, you can do the method as an individual one-on-one session, which I do with my celebs a lot. I also took the method and did a group training also which I called the Matrix workout, where I do it here in my studio in Hollywood. I do a lot of multi-functional movements, so we’re talking about cardio and resistance within the same exercise. So we’ll do a cardiovascular movement and let’s say maybe we have the resistance bands where we would do a fast shape curl and drop into a squat. We’re doing these movements where we can get the cardiovascular out of it, as well as the resistance strength. So a lot of my success with them has come from doing these multifunctional movements where I’m able to expend a lot more energy, which results in the burning of a lot more calories.

What do you think is a mistake that you see people making when working out?
A lot of traffic today would be influence of social media. There’s a lot of people who are just looking at exercises and they’re doing things where maybe the top performance is not there. The… exercises, a lot of the times, are then done incorrectly… Say like the squat—sometimes I see people go, you know, extending in the knee on their squat which in the long run, they end up having extra pain or joint problems… I think that’s a common mistake of people just seeing exercises and doing them versus getting the professional help in those exercises.

Definitely. How do you keep clients and yourself motivated to workout? I think we all have those days when we just don’t wanna go to the gym.
Well yeah, that’s a tough one. Motivation is different for everybody. As far as me, it’s pretty much knowing what I call “plan personal.” You know. some people you can push a little more, some people you need to say something to, some people you might try to give a text… You gotta understand everyone’s functional—that thing that makes them tick. Once you understand the thing that makes anyone tick, I think you can present them with that thing to help them get going as a method for motivation, other than just, you know, some people yell, scream. My tactics are more finding that functional, something that’s going to make people push. Whether that’s someone getting ready for a wedding or trying to lose weight for a special occasion, get into a dress, jeans—you gotta find that one reason that they’re there and use that as the motivation tool.

So what types of exercises would you recommend if I did want to just tone up or lose weight for a special occasion?
I’m a big fan of the multifunctional movements. One, I want to spend more energy but then burn more calories, and I’ve also seen a decrease in body fat percentage from doing the cardio and the resistance together. So most people, when they enter the gym, they’ll do a cardio segment and then they’ll maybe do their resistance training. For efficiency of time, I just add those two into one. So any multifunctional movements if you see in my videos with the Kardashians or any of my clients, more likely we’re doing the multifunctional movements, again, which is a resistance and a cardio move done in one sequence.

I wanted to also talk to you about BODYARMOR Lyte Sports Drink. What makes you passionate about it?
BODYARMOR LYTE is the perfect hydration option to fit within my quarters workout method. Again, I do my four quarter method, and in between the quarters, it’s time to rehydrate, which helps sustain performance throughout the workout. BODYARMOR LYTE is naturally sweetened, low in calories, and packed with potassium; it’s my go-to drink when I’m doing my workouts.

And you think it’s better than just drinking water, or even Gatorade?
Yeah, I think it’s better because BODYARMOR LYTE is made with coconut water, it’s also packed with potassium and electrolytes and has nothing artificial. Once I tried it I was like, “hey I want to present this to all of my clients”—to all of my group clients and to all of my private celebrity clients as well—and it a big hit with them. They love BODYARMOR LYTE because it tastes great and it’s only 20 calories per serving.

We also just launched BODYARMOR SportWater, a proprietary sports electrolyte formula with a pH of 8+. People love water, but this is water works harder for you during a workout.

…The example that I give is, you take a professional athlete in any sport, and you know there’s no way they can perform in the third quarter of the third half of the game like they gotta perform in their fourth quarter or the end of the game, whether it’s soccer… Like, those guys are running up and down the field… To perform in the beginning and the end, you just can’t drink water alone. So that’s why BODYARMOR Sports Drink became one of those go-tos for me, packed with electrolytes and vitamins.

Do you have non-famous clients in addition to the celebrity ones?
Yes. In my eyes, everybody is a star. I do my group Matrix workout, I have a studio in Hollywood on Melrose where I train, where we get non-famous people as well. So I train them all.

Do your workouts differ between your two types of clients?
The individual, you know, it’s only one or two people in the room so sometimes a Kardashian sister might join or something so I’m able to focus on, in terms of space, “stay right there”. Versus in the group workouts where I get to move around a bit, but the method and the exercises, everything remains the same. In the group workout, I only use resistance bands. On one on one, I’m able to use a few more tools like dumbbells or a machine or something, depending on who I’m training, like a Josh Duhamel or someone who likes more muscle would go to a more heavier weight. But the method stays the same.

Speaking of using heavier weight, I know there’s this common fear among women that if we lift weights we’ll get too bulky. Do you have any advice about that?
I think my advice on that is, stay within high repetitions, so anywhere between 20 and 30 repetitions, and stay away from the heavy weight. But even like, for Khloé right now, who just had a baby three months ago, she’s very adamant about not gaining and not having muscle. She wants to lose, lose, lose right now. So again, as I’m handing her different resistance equipment, I just keep reminding her that we’re gonna stay low in weights, high in repetition is the key for that.

How many days a week do you think that people should workout?
I would say anywhere from three to five days a week. Three at the minimum, five at the max. It’s basically to give yourself a day or two for recovery. This way it also helps to beat injury as well.