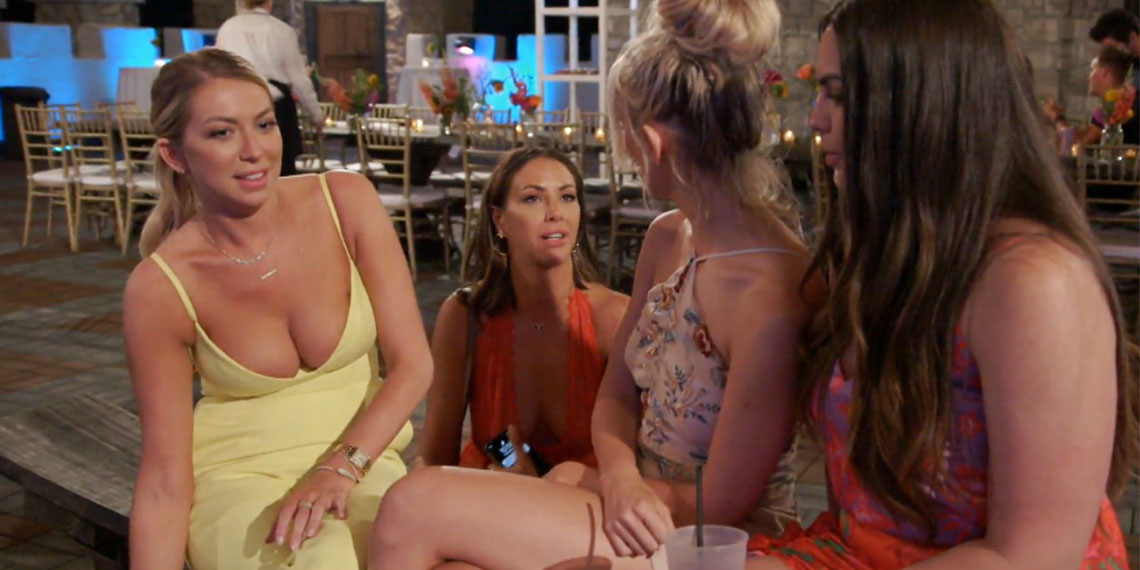 Well, I might perish from the coronavirus any day now, but still, I continue to write these recaps. (That’s a lie, I don’t even have a cold.) But if I do have to go into self-imposed quarantine, I guess that will give me much more time to write about our favorite band of servers! I suppose there’s a silver lining to everything.

Last week, everyone arrived in Kentucky for Jax and Brittany’s wedding week. Do you think after the wedding they’ll be like, “how could you do this (i.e. call me out for a legitimate wrongdoing), on the week after my wedding”? Actually, why am I even asking that question? Jax and Brittany are going to be with their wedding how most white women are with their babies: Oh, it’s only 26 months old!

This week, we open up at Jax and Brittany’s rehearsal. Jax and Brittany start giving a speech, when a fake detective shows up, because this is not just an engagement party—it’s a fake murder mystery whodunit party.

We need to get Michael Scarn on this case.

After the game (which Lala nailed and Stassi overthought, to try to prove to everyone how much she really loves murder… somebody tell her real detectives know about Occam’s razor), Lala, Stassi, and Katie are talking sh*t about Kristen. Kristen comes over and says “what are you guys talking about?” and Lala, ever the G, says “you.” Kristen, trying to project self-confidence but failing miserably, says, “I love that.”

Kristen says Carter is her best friend, conveniently forgetting all the times he’s treated her like sh*t and screamed at her and whatever. And also forgetting her actual best friends, who are sitting two feet in front of her. And no, I didn’t have to recount Carter’s horribleness for myself, because the Bravo editors (who, tbh, are now going borderline overboard this season) have inserted a convenient little flashback to all the times Carter treated Kristen worse than I treat random people on the subway whom I know I’ll never see again.

Kristen tries to read everyone one by one. She says that Lala is a bitch, Stassi doesn’t care about anyone’s problems (I couldn’t actually hear what she said because Katie immediately started yelling “you’re an obnoxious bitch” over her), and Brittany comes running over to tell everyone to stop fighting.

At SUR, some random girl (Adriana?) asks Dayna what’s up with Max. They also show a flashback in which he compliments her, but solely her makeup/beauty routine. I’m just trying to get a guy who will notice my haircut, but ok. Adriana tells Dayna that she saw Max with a girl, and they seemed “friendly”. Adriana and Danica found the girl on Instagram (her name is Olivia), and she’s wearing a Pride shirt that Max gave her. Ah, giving a TomTom Pride shirt—the true marker of a serious relationship.

Shockingly, everyone ended up being right about Max. Ya hate to see it.

Two nights before Jax’s wedding, he is NOT going out, but staying in to like, ruminate on his life. Is this…. is this… growth?

Throwing in my favorite gif for good measure, even though we are about to see that it’s not really applicable here:

Kristen is now crying to Beau like “you’re my boy, Beau”. Beau literally has to explain the concept to her that you can’t pay as much attention to your friends as you do to your significant others. Kristen’s crying that nobody ever calls her up to ask her if she’s okay, and it’s like the whole cast has just learned what us viewers have known since the dawn of this show: that every single person on it is self-absorbed as all f*ck.

Kristen really wants us all to throw her a pity parade because she can’t decide how she feels about Carter long enough to break up with him or get back together one way or the other. And to that I say:

You gotta love people who create their own problems and then get mad at everybody else for not coddling them through their self-imposed dilemmas. If I were friends with Kristen, I would have murdered her six episodes ago. (I’m a great friend, I swear! I’m very fun at brunch.)

Everyone except Jax is hungover the next day, and to be honest, “I did not mean to get that drunk last night” should just be emblazoned on Schwartz’s tombstone at this point.

Lala comes to Kristen and Scheana’s room, and Kristen just straight-up ignores Lala. Ironically, Kristen says of all her friends refusing to baby her, “I’m so tired of it.” Oh, you’re tired? I don’t even know any of you, and I’m f*cking exhausted.

The funny thing to me is that Stassi is ready to be done with Kristen forever because she’s just now realizing she’s a psychopath. I guess it’s only ok when Kristen is flying girls in from Miami and punching James at weddings—in other words, when she’s only being a psycho in other people’s relationships, and it’s fun and dramatic. Not when it’s actually like, emotionally laborious.

We learn that Schwartz did the most Schwartzy thing ever and lost his own marriage license, meaning that Katie and Schwartz have not technically been married this entire time. Just throw out season 5, that was a complete waste of time.

Jax: But how do you do your taxes?
Schwartz: What are ta…. taxes?

I f*cking love that Katie trusted Schwartz with, like, the only actual important part of the wedding (making sure they are, ya know, legally married), and Schwartz could not even manage to keep track of one piece of paper. ONE. This is the ultimate “you had one job!”

Scheana’s lost her voice, probably from screaming ” IS MY BEST FRIEND!” to nobody who asked. They’re talking about James and Raquel and how James agreed to go to an AA meeting, and Lala agrees to reach out to James to talk to him about it. Can’t wait to see how little time it will take him to say something offensive to Lala and nuke that olive branch of friendship right into the ground.

Kristen’s moved on to Stassi’s mom, now that she’s officially tapped the Weho Sympathy Well. Just when you thought things couldn’t get any more bleak.

Speaking of Weho, Max goes over to Dayna’s apartment. The great thing about this scene is he probably thinks he’s getting laid, when we all know he’s walking into an ambush. *Rubs hands together excitedly like Mr. Burns*

Dayna starts off real subtle, like “is there anything you need to tell me?” Max obviously says no. Dayna’s like “so you’re not exclusively dating this girl?” And shows him her phone.

I’m f*cking impressed that Dayna had the strength to end their sh*t right then and there…. and then dipped his necklace in toilet water AND THEN KITTY LITTER before giving it back to him. Carrie Underwood called, she said she’s writing this into the remix of “Before He Cheats”.

Lisa ends up making Jax and Brittany’s wedding because her mother’s funeral ended up getting delayed. Jax and Lisa are having a heart-to-heart and whatever, and he starts choking up about not having any parents at his wedding. I think I speak for all of us when I say: BUT WHAT HAPPENED WITH YOUR MOM? The people demand the full story!

Meanwhile, Beau has joined a flash mob at the Pride parade. Or is it a zumba class? I’m unclear. Anyway, I would probably do the same thing if I were trapped in the same room as Kristen and she was cry-screaming at me.

At TomTom, Max is filling in James on the Dayna situation. He says everything would have been fine if everyone stayed out of their business, conveniently forgetting that if he hadn’t done anything, there would have been no business for anyone to get into. But sure, blame it on the women. Also, James doesn’t want to go to an AA meeting. Who’s shocked? Nobody? Bueller? Ok good, moving on.

Jax and Brittany come back from the party, have a whole conversation about how Jax is about to stop drinking because they are getting married in the morning, and then they both go, “Okay, let’s go party some more.” I know how this is going to end, and it’s with Schwartz going missing on the roof all day.

Brittany told everyone to bring onesies. Beau shows up in a full knight costume. Kristen is basically getting naked. She’s going to be realllly fun at the wedding!

I actually can’t believe they are partying this hard the night before the wedding. All I’d be doing would be taking a xanax and passing out at 9pm. Don’t you have to be up early for hair and makeup? Being hungover at my own wedding sounds like a waking nightmare.

Brittany: I hope Jax isn’t drinking right now
Cut to: Jax ladling mystery alcohol to the face. This is hurting even me.

Then we get a montage of Jax calling Brittany his best friend and partner in crime, which I suppose does track because he did steal those sunglasses that time in Hawaii.

It looks like next week will be Jax and Brittany’s wedding, and then we’ll finally be home free! …Until Lala’s wedding and Stassi’s engagement. But still, silver linings!