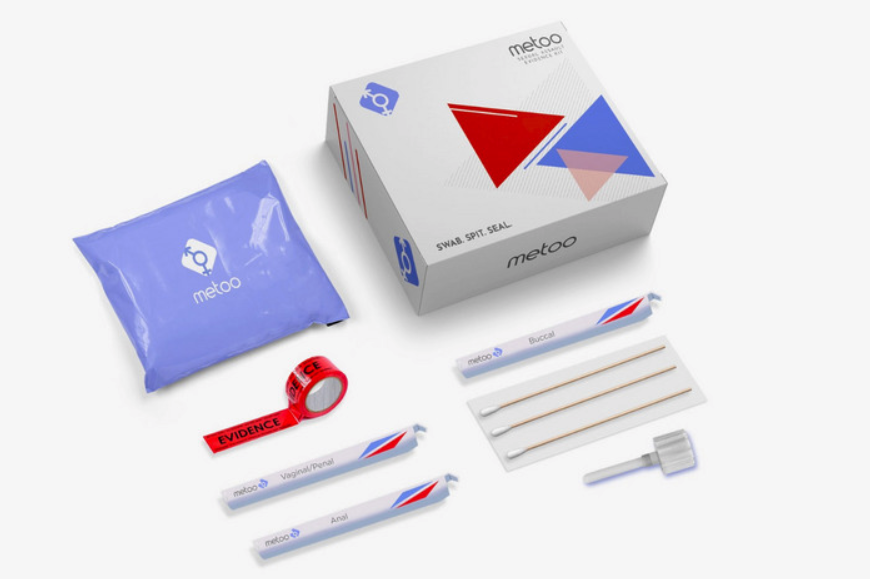 Content warning: This article contains discussion of sexual assault and may be triggering for some readers.

I don’t really know how to introduce one of the most absurd and offensive products I have ever come across, so I’m just going to cut straight to the chase: A start-up recently developed what they’re calling the MeToo Kit. That sounds bad, and it is pretty bad. That’s because the MeToo Kit is an at-home rape kit.

You read that right. An at-home rape kit. Before we really get into it, I want to take a second to explain what a rape kit is and what it is used for. A rape kit is, according to my good friends at Wikipedia, “a package of items used by medical personnel for gathering and preserving physical evidence following an allegation of sexual assault.” According to RAINN, the Rape, Abuse, and Incest National Network, evidence is collected for a rape kit during “examinations of the mouth, vagina, and/or anus. It may also include taking samples of blood, urine, swabs of body surface areas, and sometimes hair samples.” The rape kit accompanies an exam, and is the actual container that includes a checklist, materials, instructions, envelopes, and tubes to package any fluids and/or evidence of an assault that were collected during the exam. According to Melissa Souto, a survivor who told her story to NPR Illinois, forensic exams can be emotionally and physically unpleasant, exhausting and painful. A scene in the new Netflix series “Unbelievable” captures how painfully slow, repetitive, and onerous forensic exams can be for survivors. Because there are a lot of steps and procedures involved in the typical forensic exam, they can take a few hours to complete, even when performed by a professional. So you can probably see why having survivors perform that exam at home may not be the best of ideas, no matter how well-intentioned.

The reason why rape kits are so important is that they are frequently used in court as evidence, which is why survivors are not supposed to bathe, brush their teeth, wash their face, comb their hair, or use the bathroom immediately after an assault if they can help it in order to preserve physical evidence. So if you’re doing your own rape kit (which you happen to have on hand) at home,  it’s safe to assume it means you have been assaulted, which means you’re expected to dive right into a self-performed forensic exam right after experiencing one of the most traumatic experiences possible. The MeToo Kit didn’t seem to consider this when making the product, in my opinion.

I do want to admit that I don’t think that the MeToo Kit was developed with insensitive intentions or to launch the next trendy start-up. In fact, I had the chance to speak to co-founder and CEO Madison Campbell, who is a survivor of sexual assault herself, and I couldn’t help but ask why she wanted to introduce something like this to the world.

“As a survivor of sexual assault, the #MeToo movement is what encouraged me to move forward on this product,” she said. “The kit was named MeToo because it immediately identifies who the kit is there to support—survivors of sexual assault who have been silenced.”

As we’ve all learned from the #MeToo movement, coming forward is really hard, so kudos to Campbell for being brave enough not only to speak her truth but also to try to do something to help other women through their own assaults. However, my praise for the MeToo Kit ends there because, even though it’s a good idea in theory, it probably doesn’t work in actuality and may set women up to have evidence thrown out in court. Here’s why.

For starters, if someone does plan on pressing charges against their attacker, the results of a forensic exam will be openly discussed and used to determine the fate of your assailant. Michigan Attorney General Dana Nessel elaborated on this in a public statement critiquing the kits:

“This company is shamelessly trying to take financial advantage of the ‘Me Too’ movement by luring victims into thinking that an at-home-do-it-yourself sexual assault kit will stand up in court,” she said. “Career prosecutors know that evidence collected in this way would not provide the necessary chain of custody.”

I mean, that makes sense, considering it doesn’t seem very logical to let the person charging someone with a felony gather and present their own evidence against their attacker.

After speaking to Campbell, it’s clear that the MeToo Kit is very much not ready to be rolled out quite yet. She says, “While still under development, we would address Chain of Custody through technology, both hardware and software. We are developing a proprietary tamper-proof device. Additionally, we are also developing a mobile application with barcode scanning, trusted timestamps, witness testimonials, and video evidence.”

Even though I respect Campbell for wanting to change the process so that it’s even just a little more comfortable for people who just experienced intense trauma, there are so many things wrong with the kit that I just don’t trust it. For example, there are quite a few one-liners from the “about” page of the site that, in my opinion, derail the logic behind the brand.

According to its website, the “MeToo Kit is founded on the principle that you should be able to take back control.” Although everyone (hopefully) supports a victim of sexual assault taking her life back into her own hands, it’s difficult to say definitively that victims performing their own exams and collecting their own evidence are the ways to do that for all survivors. The MeToo Kit as it’s currently designed provides a massive opportunity for evidence tampering and/or contamination, as the state’s attorneys general note, could get the kits thrown out in court.

Another well-intended but misguided statement: “If every freshman during orientation was given a kit, we believe that it would not only enable survivors the privacy and comfort of collecting evidence at home, but also create a psychological deterrent on campus.”

First of all, rapes are not exclusively limited to college campuses and are definitely not limited to freshmen. Anyone can be raped anywhere at any point in their life, which is a tragic but true fact. Secondly, this statement seems to suggest that if you’re a college freshman, you’ll probably get raped, so you may as well make the experience as pleasant as possible for yourself by purchasing your own DIY rape kit to do in the comfort of your own home. Excuse me while I say “yikes” for a full minute. Regarding the second half of the statement above, the only thing that distributing a rape kit to every college freshman would create is an environment of absolute terror.

One more massive issue this product proposes is that it poses itself as the smoke detector of sexual assaults, even though you can’t necessarily prevent a rape. Another sentence I snagged from the site: ” for themselves and loved ones, not only as a viable resource, but as a symbol of protection and hopeful deterrent to assault.” There is so much wrong with this sentence that I don’t even know where to begin.

For starters, at which occasion would you gift a loved one an at-home rape kit? After they’ve already been assaulted as a comforting afterthought? Secondly, no matter how detailed the instructions on the back of the box are, no one is well-versed in performing her own forensic exam, so the MeToo Kit isn’t really a viable option whatsoever.

Lastly, having a rape kit in your home, unfortunately, does not mean that there is less of a chance you’ll be assaulted, and it definitely doesn’t mean that you’ll be protected. Do they think assailants knowing their intended victim possessed a rape kit would scare them off? You can’t even use the kit until after you’ve been assaulted, so at what point does the MeToo Kit protect you? At the end of the day, you can take all of the legitimate precautions, but these horrible, disgusting things still happen, rape kit under your bed or not.

If you’ve been assaulted, RAINN recommends getting to a safe place and seeking outside help immediately. Whether you call 911, a friend or family member or the National Sexual Assault Hotline, which “will direct you to the appropriate local health facility that can care for survivors of sexual assault,” you’re doing the right thing by letting other people step in and help so that you can heal. In some cases, the National Sexual Assault Hotline will send a trained professional to meet you either at your home or at a hospital and help you through all of the tough procedures that follow an assault. No one should have to experience any of this—especially having a rape kit done—alone.

Do you want to learn more about what RAINN’s policy team is working on or what state capitol we’re visiting? Follow us on Twitter @ rainnaction and turn on notifications so you never miss an update!

So, to wrap up: the MeToo kit, while well-meaning, is a misguided effort that, at this point in time, would likely not help survivors of sexual assault.