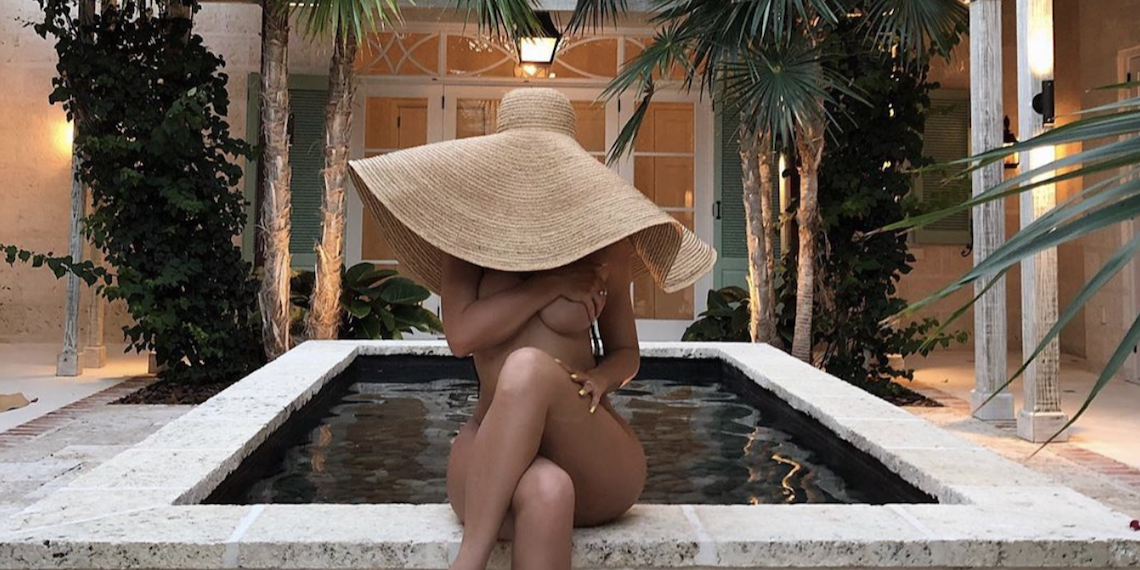 This Influencer Is Accusing Kylie Of Copying Her Naked Pic

In the world of influencers on Instagram, it’s hard to believe that anyone really has original ideas anymore. There are only so many different poses you can use for your thirst traps, and at a certain point, it’s all been done. It’s great that we have accounts like Diet Prada calling out when actual creatives like designers and photographers get their work copied, but posing on the beach isn’t a talent.

This week, Kylie Jenner was in Turks & Caicos with some of her closest friendfluencers (yes that’s a new term that I just coined), and the entire trip was extra AF. Kylie’s posted several photos of herself from the trip, but the most talked about one was Kylie, wearing nothing but an enormous sunhat, posing in a courtyard. It’s obviously very revealing, but it’s actually a pretty cool photo.

But, in a truly shocking turn of events, it seems that Kylie Jenner might not be the first person to ever pose naked in a sunhat! Really? How could this be! Everything Kylie does usually seems so innovative and unique! Lol, I crack myself up.

People quickly noticed this comment from influencer Amanda Ensing, who I’ve never heard of, but she has a million followers and is verified. Good for her.

A quick trip over to Amanda’s profile shows that she recently posted this photo of herself in Mexico, where she is—you guessed it—wearing nothing but a giant hat. Well, her hat is considerably less giant than the one Kylie was wearing, but it’s still a big hat. The setting of the two photos is pretty different, but the concept of “naked girl with hat covering face and legs and arms crossed” is undeniably similar. The only real question here is…who cares?

Also, shoutout to Amanda for this iconic caption, which wins my award for Instagram Caption Word Salad of the Week. Should I make this a recurring thing? I just might. When I read this beautiful, touching poem about a butterfly with bullet holes, I was immediately reminded of some poetry I wrote in second grade. We definitely have the next Maya Angelou on our hands.

Amanda’s comment on Kylie’s photo did exactly what it was intended to do: get Amanda lots of attention. Time and time again, we see these random creatures of the internet come for the Kardashians with no real intentions other than getting higher engagement on their Instagrams. Remember earlier this year, when total rando Kami Osman accused Kim Kardashian of copying her birthday dress for her Met Gala look? #NotOnMyMoodBoard.

After getting the desired attention, Amanda went into damage control mode, insisting in an unnecessarily long Instagram story that she never meant to come for Kylie.

TL;DR: Oops, I had no idea this would get any attention! I love Kylie! Thanks for all the new followers! Love and light!

Somehow, it’s still so entertaining to me when these basic women use the Kar-Jenners for exposure, and I hope Amanda enjoys it, because we’re definitely never going to hear about her again. Case in point: you probably already forgot Kami Osman’s name, and I literally wrote it like, one paragraph ago.

So, I guess the moral of the story is that anyone can pose naked in a sunhat. On that note, does anyone know where I can get a sunhat that’s bigger than my body?