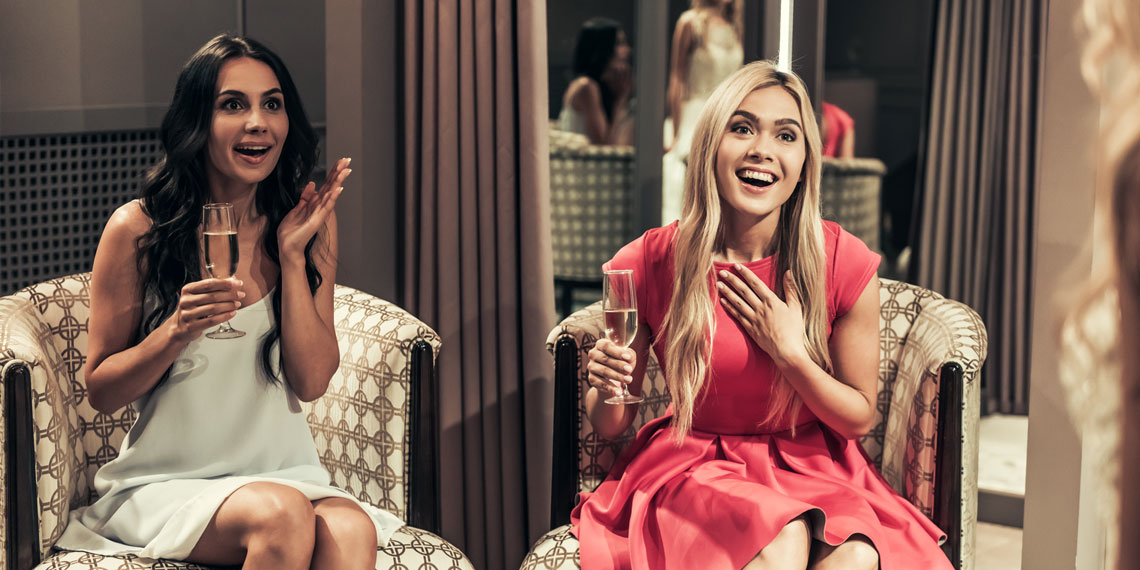 5 Things ‘Say Yes To The Dress’ Gets Hilariously Wrong

If it’s on, you can bet I’m watching Say Yes To The Dress. Not only do we all love Randy’s antics (because I only watch the NYC one, since it’s the only one that counts), but I love watching a bride break down when she’s a) gained too much weight; b) isn’t allowed to go over $10k; and c) requires the designer to come out and tell her what a beautiful butterfly she is in order to purchase said $10K dress.

This shit is so unrealistic it’s hilarious. As someone who has successfully bought a wedding dress (and like, gotten married but I feel like that’s less important here), here are all the things that are totally ridiculous about Say Yes to the Dress.

1. You Probably Won’t Have An ‘OMG THIS IS THE DRESS’ Moment

You’re going to try on A LOT of dresses. Some will look hilarious, what with their giant bows or wrist-length lace or see-through corsets. Some will look literally amazing on you. You’re going to like (and hate) a lot of them. It’s pretty rare to have an OMG THIS IS 100% THE DRESS moment, which you’ll notice the show always hypes up. So, take this fucking advice to the bank: If you don’t have an OMG moment, it’s fine. It’s normal. Again, you’re going to like lots of dresses. Just pick one you feel comfortable and like yourself in. Don’t let these TLC skanks make you believe you need a dress orgasm when “the one” comes along.

2. Not Everything Works Even After Alterations

Say Yes to the Dress makes it seem like eeeevery little thing can be fixed by Vera. To be fair, that betch is a MIRACLE worker (have you seen the brides that gain 15 pounds and don’t understand why their dress doesn’t fit?). Most stores that aren’t Kleinfeld have good and great alterations departments. That doesn’t mean that the backless lace dress you picked is going to perfectly hug every curve when they get done with it. Why? Because the dress you pick depends on its structure, and short of creating you a brand new dress, not everything is going to look like it’s painted on you. They’ll do their best—it’s their job. But go in knowing that miracles are unlikely.

3. Most Shops Let You Grab Your Own Dress

Did you ever notice how on Say Yes to the Dress, the brides kinda sit and ponder their lives while the attendant grabs dresses THEY think she’ll like? Most shops aren’t like that. Some will guide you to the racks where dresses within your budget live. Some will let you run all over the store. Yes, some will grab for you, but many really don’t. Don’t feel like you have to put your dress future in someone else’s hands, especially a stranger you just met. I spent 40 minutes by myself in one boutique because I wanted to try a ton of options on and because I really don’t like people in general. It’s your time and it’s your money.

4. Very Few People Are Going To Spend More Than $5K

“Oh, this one is $13,000” is a normal part of conversations at Kleinfeld on Say Yes to the Dress. Outside of TLC—a place where being 600 pounds is commonplace and buying $10K dresses you’ll wear for one day is totes fine—this isn’t a typical occurrence. One shop may have nothing over $5,000. Another may have more intermediate pricing. The fact of the matter is that very few bridal shops are going to carry one-of-a-kind pieces that clock in at about as much as a shitty used Honda.

On top of that, don’t feel like you have to spend a certain amount. On Say Yes to the Dress, if a bride has a budget of less than $2,000, they often get the “WTF YOU’RE POOR” music and an attendant talking about how there are so few options for those who are povo. FAKE NEWS. There are tons of dresses from $100 to $2,500. Maybe not at Kleinfeld, but there are in the real world.

5. It’s Better If You Bring One Person

Show me an episode where the whole bridal party gets along, and I’ll eat my hand. The more people you bring to a bridal appointment, the more issues and opinions are going to be hurled at you. Mommy wants a ballgown. Sister wants a mermaid. Gramma wants a tea-length. You know whose opinion matters? Yours. Bring one person or no one at all and pick the dress YOU want to get married in.