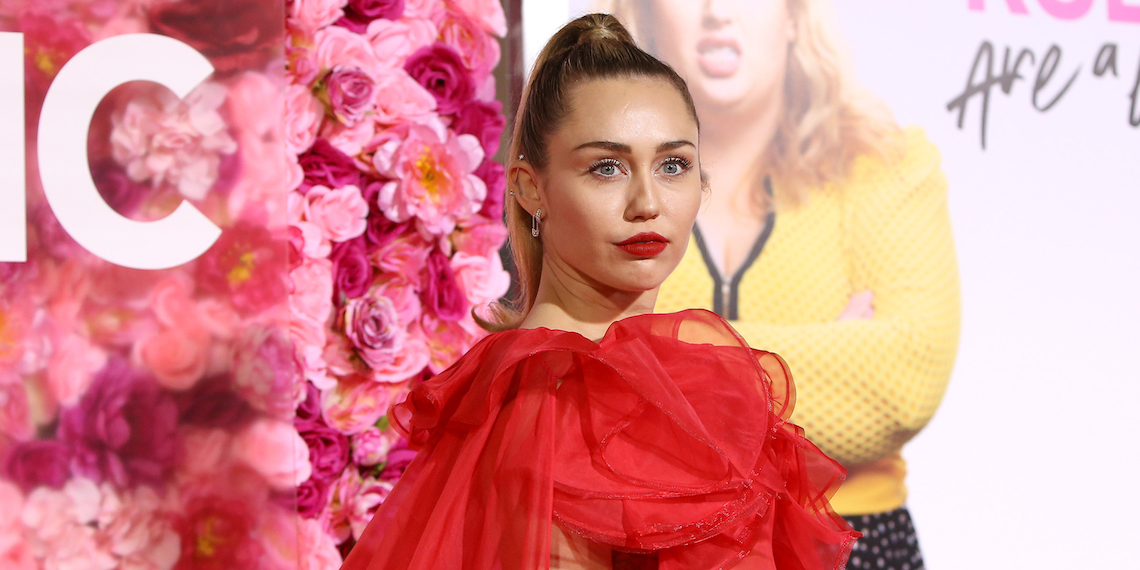 In these dark times, the social media presence of Miley Cyrus is one of the few things that brings light to our world. It’s been years since Miley gave a f*ck what anyone thinks of her, and her Instagram is a ray of sunshine. Seriously, she looks so happy. It’s been a few months since she and Liam Hemsworth finally got married, and things seem great in the world of Miley.

To illustrate just how happy and free she is, yesterday Miley posted a photo of herself naked on a lounge chair in the desert, as one does. While I don’t even want to think about the sunburn this could cause (I sure hope she liberally applied SPF), Miley looks pretty content in just an orange and yellow bucket hat. Her caption celebrates festival season and being queer, which is a whole-ass mood. Miley, you’re doing amazing sweetie.

So we love the photo, but Instagram, being a complete messy bitch who lives for drama, chose the perfect comment to highlight in my algorithm:

That’s right, it’s none other than Tana Mongeau. If you’re thinking that name sounds familiar, but have no earthly clue why, I’ll help you out: Bella Thorne. Until just a few weeks ago, Tana was the third member of Bella and Mod Sun’s throuple, may it rest in peace. Bella cleared things up by tweeting that they’re not together anymore, and we pretty much stopped thinking about Tana.

I’ll admit, I know more about Tana and her community of YouTuber friends than I should, and I generally find her pretty insufferable. Like, this girl started what was basically the Fyre Festival of conventions. (It was called TanaCon; look it up. One highlight: fans were stuck waiting outside the site of TanaCon for hours in the heat and left with nothing but third-degree sunburns.) So it goes without saying that I am mercilessly fascinated by what is going on in her personal life. I needed to know: Does Tana know Miley? Are they friends? Is something going on here? Is she thirsting? Or is she just being a fangirl? Are we human? Or are we dancer? I’m off the deep end, watch as I dive in.

First of all, Tana is clearly a huge Miley Cyrus fan. She’s tweeted about her many times, dating back to at least 2013:

“@MileyCyrus: My name is Miley. I sing about it. Stfu” I love u

Tana was just 15 when she tweeted this, so basically she was all of us on Twitter when we were 15. No shame in that game. However, Tana is now 20 years old, and her Miley obsession hasn’t cooled down. Just last month, she went full Amanda Bynes in a couple of tweets that are honestly so deranged.

Okay so obviously this is some spooky sh*t, but was it really just an inside joke between two friends? Tana and Miley are definitely not on the same level in terms of fame, but just four days later, this whole psycho fan relationship got turned on its head. On Valentine’s Day, Tana posted photos of a very special gift from Miley:

when your idol sends you weed it kinda tops every other valentine’s day… i love u @MileyCyrus pic.twitter.com/nmXFfrULCU

Okay, what do I have to do to get a weed bouquet from Miley Cyrus, because that’s literally the only thing I want in this world. Also, how do I ship a weed bouquet to myself (and pretend like it’s from Miley Cyrus)? Okay, I’m getting sidetracked. In case you don’t feel like clicking to read the note, here’s what it says:

Nothing breaks like Tana’s heart when Miley doesn’t respond to her tweets! Girl – I got you! Happy Valentine’s Day!! – Miley

This is…so weird. Props to Miley for referencing her own song in the note; that’s how self-promotion is done. Also, way to acknowledge Tana’s tweets without actually responding to Tana’s tweets. This is the most Miley gift I’ve ever seen, and I am taking detailed notes for all my future gift-giving occasions.

It’s important to note that Miley does follow Tana on Instagram, but I have a feeling they’re not like, actually friends. If anything, my guess is that someone told Miley about Tana’s obsession with her, and it’s fun for her to feed into it, and why not? There’s no evidence of them hanging out or anything, so I really don’t think this goes past social media. Either way, I still want to get my hands on one of those weed bouquets.