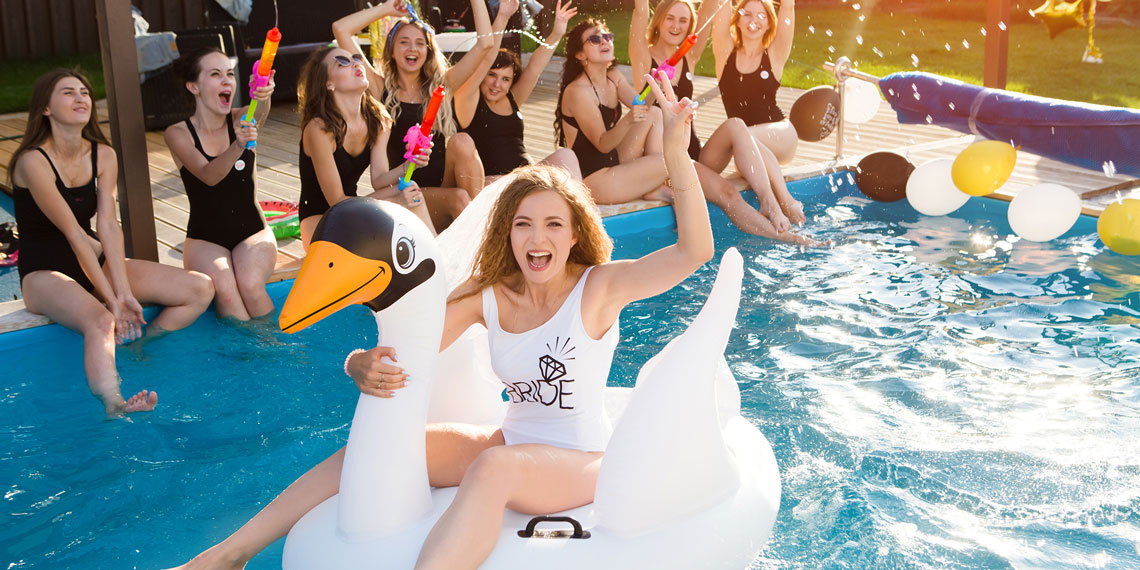 It is my personal opinion that there are enough bars in Manhattan that no one should ever have wait in line to get in. The same can be said about bachelorette weekend destinations. There are more than enough fun cities in the world to take cute Instagrams in matching high-waisted bathing suits, but that doesn’t stop way too many of our fave brides-to-be from throwing their cowboy boots in a duffle and heading to Nashville for their bachelorette weekend. For those of you who would like to experience what being original feels like, but still want to have a truly fab weekend with your best friends, please, for f*ck’s sake, avoid the following cities and give the world some fresh inspiration!

Only two more days until the coolest firework show! Who’s excited? Thanks for the photo @stuartdeming

Obv had to start with the most traveled-to destination. I don’t have the precise figures on how many groups of young women travel to Honky Tonk Town for their bachelorette party, but if my Instagram is an accurate indicator of the truth, then every basic bitch in America is booking her bachelorette trip to Nashville. Don’t get me wrong, Nashville is a seriously great city, and I was this close to spending four years there for college, but I chose a different yet similarly Southern school instead. Oops? Look, if you truly love this city and are dying to take your crew here, you do you, but you will have to accept that you will be sharing Broadway with about a million other bachelorette parties. Who knows, maybe you’ll make a few new friends? However, you’re more likely to be really annoyed that it won’t really feel like your weekend. Also, give the Nashvillians a f*cking break from your drunken bullsh*t! One of my best friends lives there and said that going out is simply not an option anymore because every restaurant and bar has been taken over by bridal parties dying to run into Tim McGraw. Just let Jesus take the wheel and go to a different city below the Mason-Dixon if you want a Southern experience. Atlanta is prettier, cooler, and has a whole lot more to do (and we will have a bachelorette guide on it v soon)!

Guys, stop going to Vegas. Just stop! You are better than the city in f*cking Nevada that’s still trying to make magic shows a thing. In my opinion, Las Vegas is like a really extravagant cage. Seriously, think about it! Your entire weekend takes place in your hotel during the day and on one street (the Strip) at night. If you venture like, one mile out of these confines, you’re in what looks like the set of Mad Max: Fury Road. People who love Vegas are f*cking extra, which I truly appreciate and respect, but you don’t need to waste your efforts on the place where Ross and Rachel got married. Look, I get it. You want Vegas because you want to wear makeup and heels at the pool without being #judged. You want to get a ton of money by having to do nothing more than deciding between red and black. You want to see if Magic Mike is a myth. We stan betches like you because you have no shame in your game! Vegas is not on your level, though. Instead, save your money and go to St. Tropez or Mexico City, two places that appreciate your level of extra.

Miami is like if Vegas was in Florida. Tbh, I love Miami, but not for a bachelorette party, because it’s where the rich kids in college went for spring break and then just went back for their bachelorette weekend, which is just tacky. Give yourself and your girls a place they can get excited about without having to worry about running into their grandparents on the beach. Yes, there’s always South Beach, but you will be one of many a bachelorette group taking group photos on the sand. You can do better, ladies. Again, Miami is so overdone because it’s a cool city, but there are so many other cool cities where you can do almost everything you’d do in Miami. For instance, ever been to St. Augustine? It’s gorgeous, full of charming bars, and obv has plenty of beaches so you can come home with a fresh af tan. What’s not to love?

Did we just write a Betches’ Bachelorette Guide to New Orleans? Yes. Is New Orleans overdone for bachelorette weekends? Yes! Look, the people wanted a NOLA guide, so we gave them a NOLA guide. See, we listen to you! However, as amazing as the Big Easy is, it’s time to go somewhere else. I just want to reiterate for the fourth time that all of these cities are great, but they’re almost so great that too many people are visiting them and making them sh*tty. For instance, apparently there was once a time when Rome was like a cute, charming quiet city in Italy that wasn’t dripping in tourists taking photos on iPads. Don’t let New Orleans become the next Rome, y’all. New Orleans is such a hot spot because of Bourbon Street and the Garden District (and, let’s be real, Cafe Du Monde), but think of all of the cities with amaze streets that you’d use for the same purposes as Bourbon Street. If all you want to do is bar hop on an aesthetically pleasing, historical street, go to M Street in Georgetown! It’s like the Northern New Orleans, but with preppier boys to flirt with and ruder bar tenders because Southern hospitality truly only exists in the South.

Pink and green shades of summer! Tag a friend you’d choose to be next door neighbors with here!?? #gmgcollection #gmgonme

Remember when everyone on the f*cking planet realized Iceland exists, so at the exact same time, everyone booked a trip to Iceland? Charleston is the Iceland of the U.S. because it suffered the same influx of people, but in the form of bachelorette parties. I totally understand why: it’s like if Julia Engel was a city. Sadly, Charleston is too popular for its own good and we need to give it a rest so that it can become cool again. This tiny southern gem and its population of freelancers were not prepared for the swarm of  matching T-shirts and people asking “Hi, sorry, excuse me? Can you take our pic 80 different ways?” Charleston is so f*cking charming it hurts, but for this very reason, it’s losing sight of who it is! There are other cities out there that have a pale pink house next to a mint green house with a palm tree in between! We just need to find them! Savannah is better in my opinion. You know why I think that? Because it’s the only city in the South that the Union’s army spared because it was too damn beautiful. You know what city got pummeled? Charleston!