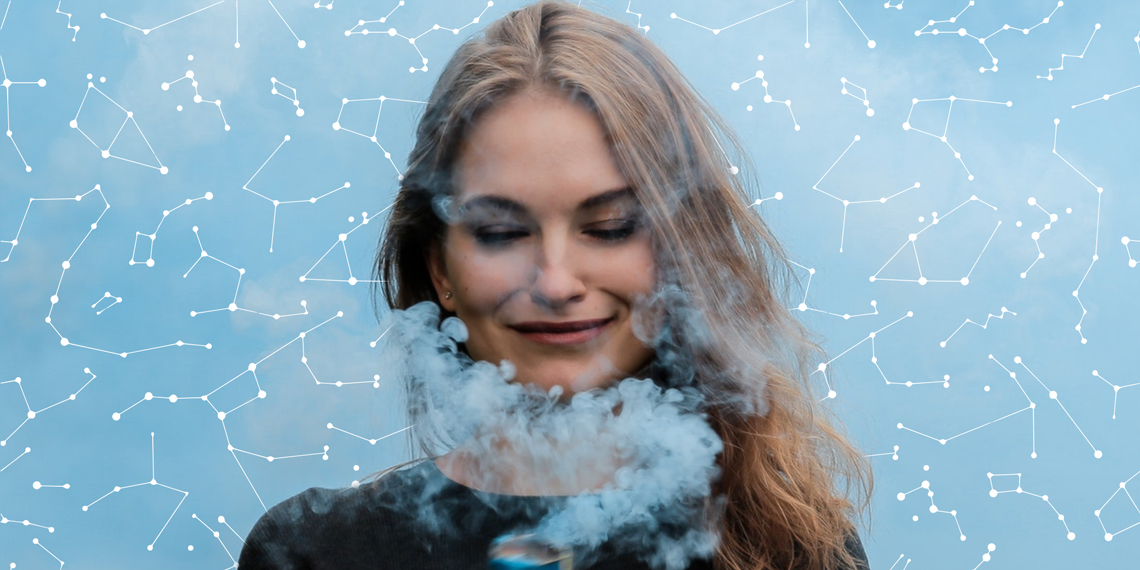 What Type Of Stoner Are You Based On Your Zodiac?

The stars have once again returned to their 420 alignment, meaning that today is the perfect day for each member of the zodiac to partake in some herbal refreshment. Now, there is no one stoner sign. Marijuana is for everyone (except like, babies), but the way you enjoy marijuana, like most things, is 100% dictated by the arbitrary placement of the stars and planets as they align with the date and time of your birth. So as you’re making your 420 plans, please keep the Stoner Zodiac in mind so that every member of your friend group, whether she be a Gemini, Leo, or dare I say, Scorpio, can get high AF without any of the munchies, anxiety, or getting paranoid the cops have been called.

(TBH tho, if the weed is dank, you’ll probably still experience all three…)

So, we’re not saying you’re a literal dealer here (though you may be, in which case please send your contact info to [email protected]) but that you’re the person in the group who is always good. You’re a natural born leader, and there’s no better way to take charge of a smoke circle than to have it be your product the circle is smoking. Anytime someone suggest it’s time to blaze, you’re right there with your own little baggie, dictating exactly the best method by which you should smoke it, and ensuring that you get greens because Stone Etiquette clearly dictates that the weed owner always gets to smoke first, unless it’s like, somebody’s birthday or something.

Given your work ethic and stellar resume, most people would be surprised to learn that you’ve been high since roughly the year 2005. You’re the type of person who is somehow able to both live a productive life and smoke weed every day. You’re basically like a stoner unicorn. Budicorn, if you will. Just make sure you’re careful with your non-Taurus friends today. Sure, you can wake, bake, and give a killer presentation at work an hour later, but most people do not have this superpower. So when your friend tells you that they absolutely cannot smoke this bong and still be okay to meet their boyfriend’s parents in an hour, believe them. Laugh at them in private, but believe them.

Geminis are always looking for the next best thing, meaning that you are the person in your friend group who is always on top of the latest and greatest in weed trends. You’re the person who rolls up to the party with some kind of crazy-ass mega-vape, or actually said “yes” when your bestie’s weird cousin pulled out some giant rube-goldberg dabbing contraption and asked who wanted to smoke it. And sure, sometimes you get so high off these newfangled devices that you blackout and wake up on a marijuana farm in Mexico, but that’s all part of the fun, right? ….Right??

As far as weed smoking goes, just zoning out to a Netflix and zoning back in 17 episodes later with no clue what the main character’s name is is just not your vibe. You much prefer getting high and doing something, even if that something is just folding socks for two hours or finally painting that one wall in your room (both of which you will have to completely do over BTW). The point is, you need to keep yourself busy while high to avoid going deep into your brain and remembering every single embarrassing thing you’ve done, starting with the time you peed during reading circle in Kindergarten, and ending 20-something years later with the anxiety attack you are about to have right now. Before packing up to go to your 420 celebration, make sure to pack some kind of crafty thing or snack recipe to keep you busy when the weed hits. Knitting and cookies are always a good option.

Leo is “The Performer” of the zodiac, meaning that you really don’t really see a point in smoking unless people know you’re smoking, nah mean? So either because you have those privacy settings on lock, or because you DGAF, your Insta story is nugs on nugs on clouds of smoke. And on 420, your extra-ness is about to get a whole lot more extra, thanks to all of the weed related clothing items you’ve stocked up on all year just for the occasion. You’re no stranger to an amazing photo op, so be sure to head out into the best possible lighting to display your new “420 BLAZE IT” shirt across social media, where your friends will appreciate the subtle addition of not one, but two, lit blunts. Just make sure to double-check that you blocked your boss on everything.

Virgos love nature, and what better way to really get in touch with nature than by smoking tree all day? Sometimes, you miss the good old days of sneaking out into the woods behind your parents’ house, crouching behind a bush, and smoking shitty dirt weed out of an apple. Now that all your friends have their own residences, it’s all nice-ass bongs and sitting comfortably on a couch. Lame. If you really want to honor your Virgo spirit this 420, roll yourself up a fat J (with those herbal, sustainable papers of course) and head for the trees. If you can’t find any friends who want to join you (allergy season, etc…) just take a couple of puffs of the dank shit and try talking to a nearby squirrel. You two will be besties in no time.

As far as weed goes, it’s something you prefer to do in the company of friends, meaning 420 is the perfect day for you to get really into it. While sitting around alone in your underwear stoned out of your mind seems pretty fucking boring to you, sitting around in your underwear stoned out of your mind with your friends sounds amazing. Maybe you’re not smoking weed on the daily, but you do maintain a small stash so that you can be ready whenever the opportunity for a smoke circle presents itself, and you’ll never say no to something that is being passed around a group. Basically, your ideal smoke situation is every episode of That 70s Show, Ashton Kutcher and all.

Scorpios are intense. This you already know from having to be yourself. As a stoner, Scorpios are the people who want to get high and think about shit. Lots of shit. Like how the Earth is just like…hanging there…in space. They’re the ones who take one bong rip, look to their left and ask, “How do we know that the blue I’m seeing is the same as the blue you’re seeing?” You’re also not opposed to just sitting back and watching Planet Earth for five hours. The Earth is fucking crazy, man.

Sags are notorious for their great senses of humor without the aid of a drug that is literally known for making everything hilarious. Get a few puffs in you, and you can’t help but turn into the classic image of a stoner, rolling on the floor laughing your ass off at something that you can’t really explain to everybody else. Sags are also intensely curious, so weed will open you up to all the classic stoner dilemmas like “If someone could tell you the exact date and time of your death, would you want to know?” and “Do I hate you because you’re fat, or are you fat because I hate you?” Also, you’re going to want to keep some eyedrops with you. Your eyes look fucking terrible.

As a Capricorn, you like to know everything about everything. So once you get into weed, you like really get into weed. You’re the type of person who can look at a nug and tell you its entire life story. You know every strain so well that when your dealer tries to sell you some bullshit called “Blueberry Kush Dog” you’ll take one look at it and say “If this was really Blueberry Kush Dog, it would have defined nugs, visible crystales, and a defined, fruity odor. This strand you have here has an earthy aroma, strands of red, and is sticky AF which leads me to believe it’s Girl Scout Cookies. I’ll take an ounce and don’t ever come around here without knowing your shit again.”

Legalize it! Aquarians are known for their social activism and liberal agenda (how you holding up these days, BTW?) making you the type of stoner who get like, legitimately heated when talking about marijuana legalization. You’ll sign any Change.Org petition that rolls your way regarding legal weed, and one of the surest ways to get your vote is to put medical marijuana on the ballot. You’ve probably been to Colorado like 20 times, and had no problem telling your horrified grandmother over Thanksgiving Dinner about how Denver made so much money on legal weed taxes they were able to invest more money into public schools (that’s true). And don’t even get you started on the way marijuana was used to help bolster the prison industrial system—seriously, don’t get started. Just relax enjoy the holiday for once, Aquarius. It’ll give you the energy you need to make the giant pot leaf protest banner you’ve always dreamed of.

Pisces are the artists of the zodiac, so you’re basically a natural weed lover. It like, gets you in the zone and shit. Pisces are also music lovers, meaning that once you toke you want nothing more than to put on your fav album and just like, chill. And what place combines rampant marijuana use, artistic expression in the form of body paint and glitter, and basically non-stop access to your favorite musical acts? Festivals, duh! Pisces are perfect for the festival scene. In fact, they thrive. Coachella? You’re there. Both weekends. Bonnaroo? Fuck it you can hang with the hipsters for a weekend. Wait, also, wasn’t that you toking next to Malia Obama at Lollapalooza? I’m pretty sure it was…