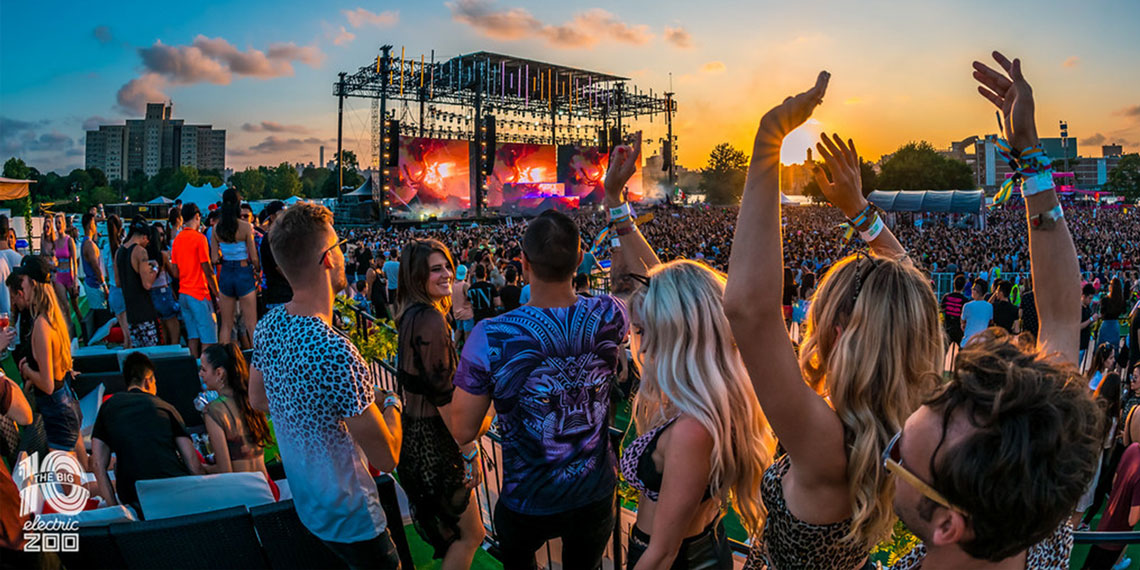 Planning for festivals is a lot of work, and nobody likes work. Sure, you could read through 16 different Reddit threads to figure out what to wear, how to get there, if it’s worth it to splurge for VIP, and whatever else you need to know, or you could just check out the Betches festival guide.

At this point, I figured I would do something useful with my knowledge of music festivals, so I decided to start a series of guides. You are welcome. I’m starting off our festival guide series with one of my favorite festivals, and one that I go to yearly even though I am, as they say, pushing 30: Electric Zoo, Ezoo for the initiated. Taking place during Labor Day weekend on Randall’s Island, this electronic festival is a fun send-off to the summer that’s easy to get to and even easier to navigate. *Looks to the camera* *Waves to the viewers* Let’s go.

How To Get There

If you don’t live in New York and haven’t figured out how you’re getting to Ezoo yet, god help you. Assuming you’re not within driving distance, which will take care of things, you’ll want to fly to LaGuardia because it’s probably easier to get to the areas you’ll want to be staying. But if you cop a deal out of JFK or Newark, then do you. As far as actually getting to the festival, you are likely going to be walking there over the RFK bridge. You can also Uber/Lyft to the festival (highly recommend so you can save your engery/feet), but you can’t Uber out. Ubers literally will not pick up from Randall’s Island (or at least, they didn’t last year), so you’re going to be either walking back or taking one of the shuttles Ezoo has. Plan accordingly!

Ezoo is not a camping festival and does not offer the option, so you’ll need to reserve some sort of accommodations in advance. Remember all your friends in Harlem and/or Queens who you made fun of for being broke? Yep, it will be time to hit those people up for a couch or half their full-size mattress! That’s becaues Ezoo is on Randall’s Island, an Island between Queens, and uptown Manhattan/Harlem that is within walking distance from both those locations. (As long as you are a little loose on your definition of “walking distance.”) If you don’t have friends with a free place to stay, you could try to Airbnb in one of those areas I mentioned, or just stay literally anywhere in any hotel you find. The subway system is extensive and you’ll be able to get uptown from wherever you are, but sticking to the east side will be easier because getting crosstown, especially on weekends, is a huge bitch.

Ezoo is electronic music, which means this is the weekend to bust out your full raver girl attire. The great thing about this is that you can wear literally anything in the world you want and nobody is going to look at you sideways and you won’t feel out of place. You could wear a bra, a thong, and fishnets. You could just wear pasties. It truly does not matter, just bring some glitter and throw on some fun makeup. Unlike other festivals, nobody cares what you’re wearing.

Leveling up by squading up. It’s the #EZoo way. #squad

Above all, though, wear something COMFORTABLE. You’re likely going to be walking 20-30 minutes across a bridge to get to the festival, so this is not the time to wear your giant platform boots with the heel (not like any festival would be the time for that, but this one especially). Also, New York weather circa Labor Day is a fickle bitch, so plan appropriately. It could be 90 degrees and sunny af. It could pour on you. Both things happened to me last year alone. Whatever your outfit is, make sure it incorporates good walking shoes, and bring a poncho just in case.

What Ticket To Buy

At this point, a 3-day GA ticket costs $300, and a VIP ticket costs literally double that. According to the website, VIP gets you admission (duh), plus a faster-moving VIP line at check-in. You’ll also get “Premium views, private VIP flush toilets, shaded chill out area with seating, full VIP cash liquor bars, complimentary cell phone recharge stations, and complimentary passed hors d’oeuvres.” Now, is it worth it? Maybe. I’ve personally never had a huge issue with the non-VIP port-a-potties, however, seating is a real issue. There’s basically one small hill where you can park your butt without getting stepped on, and that’s it. There are other areas where you can charge your phone for free, like the T-mobile activation. Also, it’s 2019, buy a mobile charger.

There’s also a “Platinum VIP” option, which gets you more of the same, plus “Exclusive Platinum Only Premium views,” whatever that means. That option costs $949, and there’s no mention of any cash bar. If I’m dropping close to a grand on a festival, you better give me as much free Casamigos as I can legally drink, and you better make that known in advance.

Personally? Unless you are very picky regarding crowds and bathrooms, I would just rock with GA. You’re literally spending double the price for basically some passed hors d’oeuvres that they are probably going to run out of in the first hour after the festival doors open.

“Ew, Ezoo? Isn’t that for 16-year-olds?” everyone says to me when I tell them I’m going there. I’ve been 3 times so far, and frankly, no. The crowd is actually older than you’d expect. I have never once looked around at my fellow festivalgoers and said, either aloud or to myself, “Ugh. The children.” You know where I have said that? Gov Ball, Coachella, The Meadows (RIP). Also? The vibe is way more chill than that of other festivals. Think less pushing and overall dickishness. People tend to respect other people and their space. Sure, if you’re trying to get to the front at Bassnectar 10 minutes after he already started, you are going to get some pushback. But as far as festivals go, the people here are generally pretty nice and chill.

Regarding the crowds… yeah. Friday is typically a dream and you can walk around freely. Saturday, you’ll see a noticeable increase in festivalgoers. By Sunday, it will be nearly impossible to move from stage to stage. Enjoy Friday as much as you can, and be sure to budget enough time in between sets to navigate through the crowds. And get there early because there WILL be a line to get in.

It honestly varies from year to year. The year the theme of the festival was The 6th Boro, everything was animal themed (why? don’t ask…) and the main stage was a giant elephant. That was really f*cking cool. The year before that, it was a cobra. Last year, for the 10th anniversary, it was just… a big sound wave, sort of. That was a bit of a letdown tbh. Truthfully, the theme of Ezoo every year should be animals, and I’m hoping they bring back the animal stages. Last year, Sunday School Grove also sponsored a jungle themed stage, which I never made it to but it looked awesome.

Okay, literally as I was writing this, Ezoo released a photo of this year’s main stage, which looks sick.

‪Sneak peek for next week ? ‪ This is our tallest & widest mainstage ever — an evolved, futuristic, 3-D, fire-shooting New York City skyline stage set to tower over Randall’s Island ? ‪ If you still weren’t sure about coming next weekend, checkmate.‬ ? → electriczoo.com/tickets‬

The 2019 lineup boasts big names like Eric Prydz, Diplo, Kaskade, Above & Beyond, Zedd, Armin Van Buuren, Alison Wonderland, Skrillex & Boys Noize, and a f*ckton more. Here are a few of my other personal recommendations:

Excision: If you’re into some harder sh*t with more music/noises than words

NGHTMRE B2B Slander; 4B; Getter: If you want to hear your favorite music on the radio right now, but like, trappy.

Boogie T b2b Squnto: If you want some fun groovy music that will make you want to dance

Flux Pavilion: If you want dubstep

Seven Lions: If you want trance/melodic dubstep/if you don’t know what that means, it’s a little more chill than most of the other stuff I’ve listed above.

GTA: If you want house/trap/hip-hop

Don’t want to listen to me? That’s fine, Ezoo made a Spotify playlist with songs from the 2019 artists.

Other Things To Do

While there are a few art installations and activations, there’s not a whole lot to do other than see acts. Space on Randall’s Island is kind of limited, so there’s room for the stages and tents, plus food and drinks, and a few pieces of art. Last year they had a fun makeup/glitter station, and apparently giant Jenga. Like, there’s stuff to do if you’re looking for it, but people are mostly there for the music and not the Instagrams.

That being said, they have afterparties and, while I’ve never been to one because I’ve been too tired, the lineups are sick. Acts include Borgore and Shaq (among others, and YES, that Shaq), Eric Prydz, R3HAB, and a lot more. It’s worth staying up for.

Overall, Ezoo is the best/only? electronic festival in New York, and it’s one of the more manageable festivals that exist. If electronic music is your sh*t, you should consider going. If you hate that stuff, don’t go. You won’t like it.