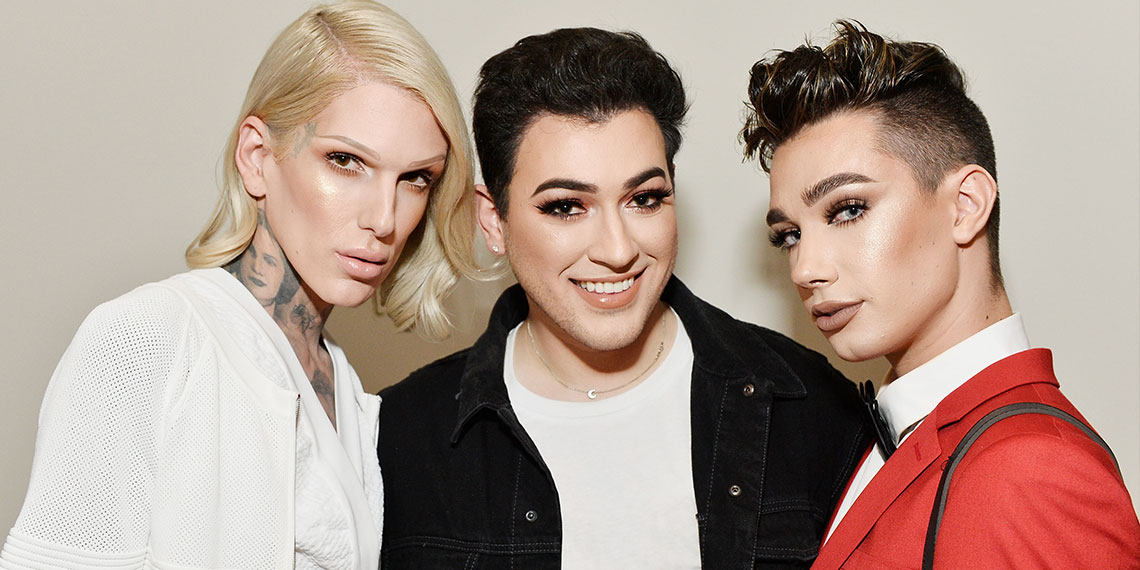 a person or thing that influences another.

Influencer Collaboration: an influencer and brand teaming up to scheme you into buying their *must-have* products.

Influencer collaborations are a dime a dozen nowadays, and only the strong survive. With a million and one launches being not-so-subtly shoved in our faces every time we open any form of social media, it’s important to narrow down which collaborations are actually worth the purchase, and which are a major skip.

Jeffree Star, punk singer-turned-YouTube beauty influencer-turned-mega millionaire business owner, recently launched his cosmetics line collaboration with YouTuber Shane Dawson. A simple Instagram campaign was not enough, so the two partnered for a YEAR to put together a seven-piece docuseries about the ~BTS~ of working on a makeup line. There were smiles, there were tears, there were meltdowns… which sounds like a typical Monday in my book.

UPDATE & #SWATCHES 🚨 #RESTOCK ➡️ TOMORROW !!! There will be a Pre-Order of the Conspiracy Palette (60k) AND Mini Controversy Palette (60k) 💸 *will ship around end of Nov, early Dec . Next full collection restock will be in 2020! . The Conspiracy Collection #JeffreeXShane 🐷💗🖤 #HOLIDAYS2019 ———————————— The collection includes: 1. The Conspiracy Palette (18 shades) $52 #EyeshadowPalette 2. The Mini Controversy Palette (9 shades) $28 3. Bundle palettes $72 4. 6 #VelourLiquidLipstick shades (matte, Metallics) $18 each Shane – Burnt Brass Ryland – Are you filming – deep red OOh My God – sparkly nude I Gotta Go – lavender Jeffree, What the F***? – hot pink 5. Liquid Lipstick Pig Vault $90 6. Shane Glossin’ Clear Gloss $18 7. Diet Shane #LipBalm $18 8. Conspiracy Collection Bundle (all makeup + black imprint travel bag) $210 9. Pig 🐷 Mirrors $30 each black & pink 10. makeup bags: Imprint travel bag $30 Black double zip $40 Pink double zip $40 Accessory bag $30 Pink side bag $35 Black side bag $35 11. Track jogger $45 Track jacket $55 . 🐷🖤💗 . . In general I enjoy the eyeshadow formulas by JSC, they feel smooth and soft, they are pigmented and always have some fun shades. From the Conspiracy palette I love the bottom row especially (gives more of a winter vibe) and Trisha is a gorgeous shade (Flaming Hot swatch has 2-3 layers and My Ride’s Here is black with more of a grey tone). I found the Controversy palette super wearable…Love What’s the tea? and Exposed. They are beautiful matte shades. This is definitely a collectors collection 😍🖤 the packaging is so dope and different. I also ordered a few bags can’t wait to get it!!! . What did u get? 🖤🐷 XO #Trendmood #jeffreestarcosmetics #jeffreestar . #makeuplover #beauty #bbloggers #makeupartist #makeupart #eyeshadow #eyes #eotd #motd #mua #makeupaddiction #makeup #makeupjunkie #makeupobsessed

The seven-hour long series averaged 18.7 million views per video (casual) and resulted in the duo “breaking the internet” come collection launch time. And I don’t mean “break the internet” in the way Paper magazine throws it around every month now—I mean, Shopify was down for almost three full hours, with 2+ million unique users attempting to make purchases on the website at once, which was documented in full in the series finale. In the docuseries, Star calculated that Dawson himself could walk away with 10 million dollars in collection revenue. Given that the collection did in fact sell out in its entirely across all retailers, we’ll assume that the duo met their goal.

When categorizing the year’s top influencer collaborations, I’ll put this one as the number-one hit of 2019, given its great success, positive reviews, and sincere demand for restock.

While on the topic of men dominating the beauty industry, we’ll talk James Charles, and his collaboration with Morphe. Charles, who had a tumultuous 2019 with his involvement in “Dramageddon 2” (I can’t believe I am actually referring to this term), launched “The James Charles Palette” in November of 2018, and sold out twice before hitting the 2019 mark.

I’ll divert for a moment to explain what Dramageddon is/was (judging myself, again) just because I feel like it’s necessary.

Fellow YouTuber/beauty guru, Tati Westbrook, came out with a (since-deleted) video in May titled “Bye Sister”, consisting of Tati sitting down for 40+ minutes and ripping her former BFF James to shreds. The video left the internet in a frenzy, giving gossip channels content for YEARS, and allowed other beauty gurus (i.e. Jeffree Star) to weigh in and cancel James Charles. Followers/gossipers/14-year-olds who live for this sh*t called it “Dramageddon”.

Anyway, James’ palette, which launched long before this weird internet moment, sold out multiple times as mentioned, and makes it to my must-have influencer collaboration list. The shadows themselves work well, it’s affordable, and it covers just about every single look you’d ever have an interest in creating. If I had to take one eyeshadow palette to a deserted island (unlikely), it would be this one.

Sidenote: James Charles x Morphe launched a “second phase” of this palette—mini sized—and I am pretty sure nobody cared. Spend the extra $13 and get the OG.

Kim and her beloved makeup artist, Mario Dedivanovic, joined forces for a mini collection including an eyeshadow palette, lipstick, lip gloss, lip liner, and blush. The palette was the star of the collection, and major influencers including Tati Westbrook and Jeffree Star (both of whom typically hate everything) had nothing but positive things to say about the duo’s first collection.

Koko Kollection round 3 is available NOW! 😍💞 shop our gorgeous new collection by @khloekardashian ✨

Kylie has teamed up with a majority of her fam to make mini collections, and while some were a serious fail (the internet, influencers and fans alike, happily killed the Kris Jenner collection—more details to come), Khloé found success. The collection is universal, high-quality, and pretty, to put it simply, and the reviews are convincing.

An overall win for the industry in 2019 was the celebration of drag makeup. Drag queens are obviously pioneers in the beauty community, but don’t always take the spotlight when it comes to new beauty launches. This year we had major collaborations from major brands and major queens, including…

The collections are all equally fun and fabulous, with the spirit of all queens alike, and the inclusion of drag in everyday makeup was a major industry shift in the right direction. Winning!

I hate to call this next collaboration a fail, so instead, I’ll refer to it as ~a pretty mess~. I am just as Housewives-obsessed as the next, and when I heard that Miss Erika Jayne was doing a collaboration with Too Faced, I was thrilled. But. Too Faced has a bit of a rocky reputation in the beauty community. Most of the controversy revolves around CEO Jerrod Blandino, who had a “Rich Lives Matter” birthday cake at his most recent birthday, just to give you give you an idea of the type of person we’re dealing with. On top of that, the brand itself has had its fair share of drama with influencers alike, including Jeffree Star and Nikkie Tutorials after Nikkie’s Too Faced collaboration grossed $9+ million in sales, but only paid her out $50,000. BUT Erika Jayne is a queen so we had to support her endeavors. The collection featured an array of makeup, with names that only Mrs. Girardi could get away with (including DSL Lips and Pat the Puss highlighter) making this collaboration a fun fail.

The feedback was mixed off the bat, but in the long run, the makeup ended up at TJ Maxx stores, steeply discounted (at less than half its original price), within a few months. Nonetheless, we respect this icon for making *XXPEN$IVE* moves.

Now that we’ve celebrated the Kardashian’s successful makeup endeavors, it’s only fair that we highlight the fails as well, because even the world’s youngest billionaire makes mistakes.

It turns out, the devil worked harder for this one. Kylie Cosmetics is typically known to make decent quality makeup, and we all know Kris Jenner rules the world, but people ripped this collection to shreds. YouTubers including Jaclyn Hill and Nicol Concilio explained to fans that the quality was simply not up to par, and viewers agreed.

The packaging, cute. The products, patchy.

Kim teamed up with model Winnie Harlow for a special moment in her collection, but it fell short. For starters, the campaign photos of Kim and Winnie are a bit, um, questionable given the fact that Kim and Winnie were edited to be almost the same skin tone, which we know they are not. And, unsurprisingly, people had something to say about it.

This is what we call a Photoshop Fail, and the internet was not thrilled. In terms of the collection itself, fans were “bored”, calling the collection unoriginal and safe.

As we wrap up 2019 influencer collaborations, I can’t wait to see what 2020 brings. Let me know who YOU want to see team up with a major brand and drop your predictions below.