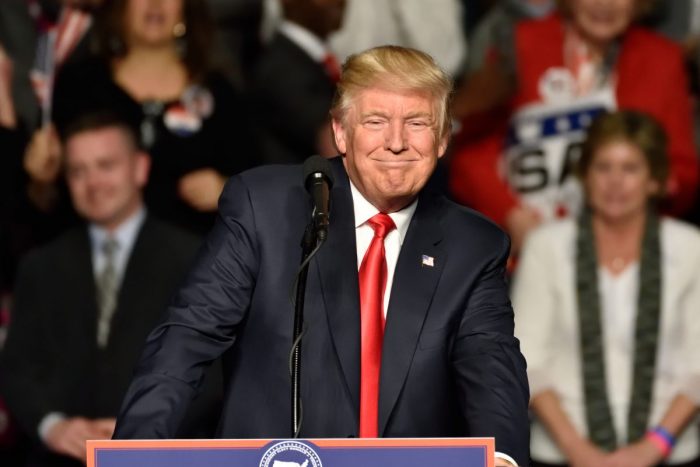 SOTU Recap: The State Of Our Union Is Whatev

The event started at 9pm and lasted over and hour and twenty minutes (RIP to all those who died while playing our SOTU drinking game – your contributions to the War On Sobriety will not be forgotten) so for those of you who turned it off at the 40 minute mark, here’s everything you need to know to pretend you’re an engaged citizen

The craziest part of the night came two seconds in, when some rando announced the President of the United States, and Donald Trump came out.

RANDO: Mr. Speaker, the President of the United States!

ME: I am not drunk enough for this.

Lol Paul Ryan had one line tonight and he blew it. You know what they say – being the most unpopular politician in America is a 24/7 job.

Trump starts out the speech employing a tactic that I often use at work meetings: shouting out people who are good at their job to deflect how bad you are at your own. He shouted out Coast Guard officers that helped with hurricane relief, firefighters, and Congressman Steve Scalise – aka the Congressman who was shot by a rogue crazy during a bipartisan Congressional baseball game. Hard not to get applause on any of these.

TRUMP: A new tide of optimism is sweeping across our land…

We got a “Make America Great Again” within the first 5 minutes, meaning that was when I took my first shot. Casual reminder the speech was an hour and twenty minutes long.

TBH every time they cut to Melania she appears to hate him more. Like this is the exact face I make when my boyfriend says some dumb shit in public that I can’t wait to roast him for when we get home:

ME every time the first lady is on screen: Girl, blink twice if you need help. Blink three times if you need edibles. I gotchu on both.

Okay can Paul Ryan maybe lean over and tell the president to stop clapping so loudly into the mic? Also to stop clapping *for himself*? You’re a reality star dude, you should actually know this stuff.

The look on the Congressional Black Cacus’ faces when Trump shouted out the African American unemployment rate is literally a renewable energy source. Like, it could fuel the Earth for the next 100 years.

Trump shouts out the tax cuts and the Republicans in the house start going crazy like they’re frat bros who just won a low-stakes game of beer pong.

The best part of the night, obviously, was the introduction of Preston, a 12-year-old boy who everyone low-key thought was Barron until we saw him close up.

TRUMP: Here tonight is Preston Sharp, a 12-year-old boy from Redding California who noticed that veterans’ graves were not marked with flags on Veterans Day. He decided to change that and started a movement that has now placed 40,000 flags at the graves of our great heroes. Preston” a job well done.

Ah, we’re at the part of the night where he’s going to talk about his policy proposals. *takes three shots in anticipation*

TRUMP: We have ended the war on beautiful clean coal!
AMERICA:

Every time they cut to Ted Cruz clapping I think about how Trump straight up called his wife ugly and accused his dad of killing JFK, but like now they’re cool because tax cuts.

I wish I loved anything the way Republicans love tax cuts, TBH. I’d have a much richer (literally) life.

Did anybody else notice that every time Trump got applause he turned to Paul Ryan, who would whisper “good job” or some shit? It’s like he’s a child at a recital whose surprised everyone by not peeing himself yet.

“Trade relationships should be RECIPROCAL!” – Donald Trump, a man who has 100% never reciprocated oral in his life.

TRUMP: Tonight I am calling on Congress to produce a bill that generates at least $1.5 trillion for new infrastructure investment we need.
EVERYONE: Wait hmm that actually sounds like a good idea.
ME: omg omg does this mean he’s going to fix the Subway???

What the actual proposal is: The Trump Administration wants to put $1.5 trillion into infrastructure (aka streets and transportation and shit), and would include Congress redirecting $200 billion of federal funds to Amtrak and transit programs over the next 10 years, while also looking for hundreds of millions more from cities, states, and the private sector.

The pros: America actually really needs this – half of our mass transit systems have gotten a ‘D’ or more and that also includes schools, roads, and drinking water systems. A ‘D’ might be okay for passing your freshman math requirement – it’s not so great when we’re talking about drinking water.

The cons: It’s hard to see how we can actually pay for this with the tax cut and Trump’s whole obsession with building a wall. Also, public-private sector partnerships like the one being proposed here tend to work better in urban areas.

Aaaaaand it’s crazy time. Shout out to all my bad hombres out there – it’s time to chug your drinks.

Trump spend the first half of his immigration talk shouting out families in the audience who were the victims of violent crimes by immigrants. He’s like a racist DJ Khaled.

Casual reminder that there is literally no political party who says it’s cool for MS-13 gang members to come into the country. Sadly feel like it’s necessary to point that out right now. Also, if you’re mad about gang violence, wait til you hear about gun violence – it’s like gang violence’s older, meaner cousin.

TRUMP: and here we have Special Agent Celestino Martinez. He goes by DJ. Or CJ. He said I can call him both. I’m going to call him CJ.
ME: Who the f goes by both CJ and DJ?

TRUMP: The first pillar of our framework offers a path to citizenship for 1.8 million illegal immigrants who were brought here by their parents at a young age…
DEMOCRATS: Omg yay!
TRUMP: …AND IN EXCHANGE FOR YOUR PRECIOUS DREAMERS, OUR SECOND PILLAR REQUIRES THE BLOOD OF EVERY FIRST BORN MEXICAN BABY
DEMS: Wait, what?
TRUMP: THIS IS GENEROUS!!!!!

What the actual proposal is: The White House proposal backs a 12-year path to citizenship for 1.8 million Dreamers, in exchange for yuuuuuge changes to the legal immigration system, and $25 billion for the border wall.

The pros: I mean, citizenship for 1.8 million Dreamers is pretty legit.
The cons: First of all, pretty sure Mexico was supposed to pay for the wall. Second of all, the changes proposed would restrict legal immigration to the lowest levels since the 1920s. It prevents people from sponsoring parents, adult children, or siblings for U.S. citizenship and ends the diversity visa lottery in favor of a merit-based replacement. In Trump terms, this basically means less people from so-called ‘shithole’ countries, and more white people “skilled workers”.

TRUMP: We want to put an end to chain migration
DEMOCRATS: Boo!
ME: WOOOOORRRRRLLLLLDDDSTAR

Seriously, you could see in that moment when Trump got booed that he was like, about to lose it. Is it weird that I’m low-key proud of him for not immediately going rogue, cursing out Chuck Shumer and throwing burger patties into the crowd? Baby steps…

Mood At this Point:

Told; North Korea is bad. No new info here. The President didn’t call Kim Jong Un fat or anything which is good.

TRUMP: I’d like to introduce you to Ji Seong-Ho, who bravely escaped North Korea, on crutches, with one leg. He now has a new leg, though I hear he still keeps his old —
ME (drunk): LEG!?? OMG DOES HE KEEP THE LEG?!?
TRUMP: Crutches
ME: Oh that…makes a lot more sense

TRUMP: Atop the dome of the capital stands the Statue of Freedom. She stands tall and dignified among the monuments…monuments to Washington and Jefferson…and freedom stands tall over one more monument: This Capitol. This living monument…
ME: Say monument again.

Trump: Thank you and God Bless America
Me: Omg. We did it. We survived.

Only three more of these to go. Unless – IDK – the president is removed from office for some crazy reason.

Accurate Depiction Of Me For The Rest Of The Trump Presidency: