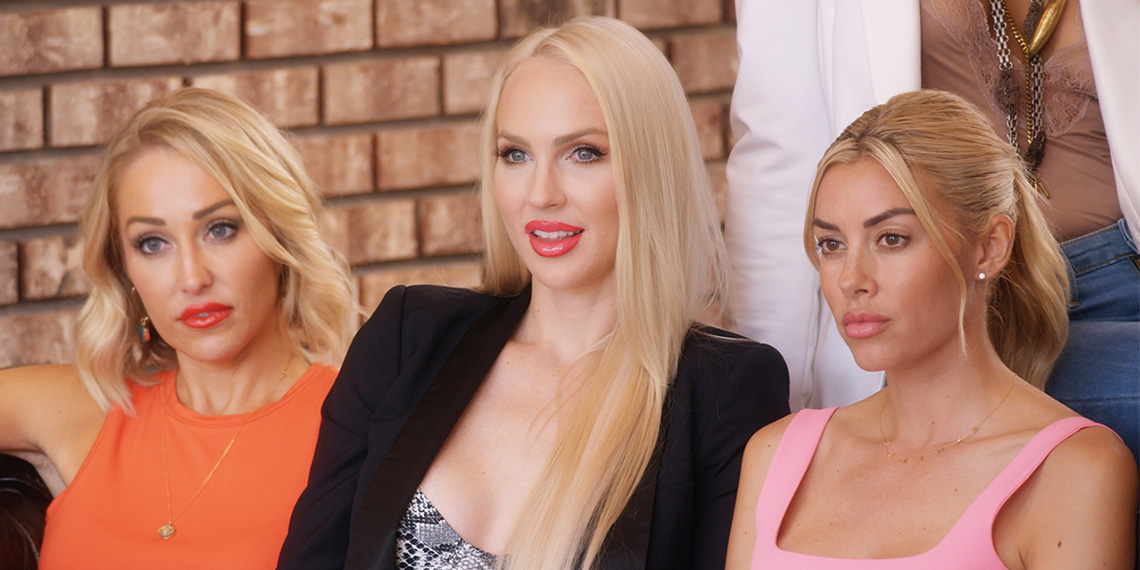 If you’ve been on social media at all in the last few days, you’ve probably seen a ton of posts and memes about Selling Sunset. One of Netflix’s first forays into true, non-competition reality TV, the show’s third season premiered last Friday, and it’s been trending ever since. The show has been a hit since it premiered last year, but with a long-awaited wedding and a huge tabloid divorce, season three is its biggest one yet.

If you’ve never watched, Selling Sunset follows the Oppenheim Group, an LA real estate brokerage group led by bald short dudes (and identical twins) Brett and Jason Oppenheim. The agents at the brokerage are all extremely hot women who wear 6-inch heels at all times and somehow never complain about it. We follow along as they navigate successes and failures in their personal and professional lives, with an emphasis on the personal. With over-the-top real estate, glam, and drama, it’s not hard to see why people love Selling Sunset so much, but there are some key factors that make it one of the best reality shows in recent memory.

Selling Sunset is created and executive produced by Adam DiVello, who is best known as the the creator of Laguna Beach and The Hills. Selling Sunset trades in 2000s fashion for cutting-edge glam, but it feels like a spiritual successor to those earlier shows. It’s still set in Hollywood, and like The Hills, the episodes fly by. Every scene is expertly produced and edited to keep the story moving along, the whole show is gorgeously shot, and nothing is ever sloppy or out of place. And also like The Hills, people have a lot of questions about what’s real and what’s fake. The answer falls in kind of a gray area.

Stars Chrishell Stause and Christine Quinn have both admitted to certain moments on the show being “amped up,” which is probably the Netflix-approved term for them to use. Quinn confirmed that she was dating her now-husband Christian for three months before they “met” on the show. Rather than “fake,” I think the more accurate term is “staged”—these are real people dealing with real issues, but I’m willing to bet they shoot some of these scenes more than once.

If you’re a fan of reality shows on Bravo or MTV, Selling Sunset is probably right up your alley. Each of the women on the show have distinct personalities, but none of them are afraid to dip their toes into some messiness. In the first three seasons, we’ve seen two weddings, one divorce, pregnancies, new relationships, and many business disagreements. Season three centers on Chrishell’s shocking divorce (it was shocking for her, but I promise it’s not a spoiler), but there are also a million other subplots happening at the same time.

And of course, these ladies never let business get in the way of personal issues. We’ve seen fights at broker’s opens, in the middle of the office, and at meetings with important clients. Not to mention, this cast can never get through a birthday dinner, celebratory night out, or even a wedding without someone starting drama. “Let’s not have any drama” are famous last words on Real Housewives, and Selling Sunset takes things to an even more ridiculous level.

The drama would be compelling even if this show was filmed in a warehouse, but the luxury real estate backdrop just makes it even better. Unlike Million Dollar Listing, the actual business is secondary on Selling Sunset, but we all still pretend to care about the Oppenheim Group, and the houses are f*cking stunning. A $40 million listing in the Hollywood Hills is a focal point of the first couple seasons, and seeing it literally never gets old. Most of the “cheaper” houses on the show are in the $3-5 million range, so basically, nothing is cheap on this show.

Love her or hate her, Christine Quinn was destined to be on reality TV. She’s reminiscent of Erika Jayne visually, and her looks only get more outrageous as the seasons go on. But unlike Erika, Christine isn’t afraid to play the villain, and will call anyone out if they do something she deems shady. Despite her claims that she never starts the drama, she definitely starts the drama like, most of the time. Between being mean to Chrishell, marrying some rich rando, and being one of the top agents at the Oppenheim Group, Christine has brought a ton to the table over the first three seasons.

Besides Mary and Christine, none of the women’s significant others appear on screen, but their relationships still play a major part in the dynamics of the show. Chrishell Stause, who was formerly a soap star, was married to This Is Us actor Justin Hartley, and as I mentioned before, their divorce takes center stage in season three. Heather Rae Young, who was dating a hockey player in season one, is now engaged to fellow real estate TV star Tarek El Moussa. Tarek is the one who hosted Flip or Flop with his wife Christina, until they went through a messy divorce. (Heather looks EXACTLY like Christina, to the point where it’s a little spooky.) The other ladies on the show have a lot of thoughts about Heather’s relationship with Tarek, and obviously, they voice those opinions.

Basically, Selling Sunset has a ton to offer, and with three eight-episode seasons, if you start now you can probably be finished by tomorrow. There’s no word yet on a fourth season, but given the fact that literally everyone is talking about the show, I’m sure they’ll start filming as soon as COVID f*cks off.