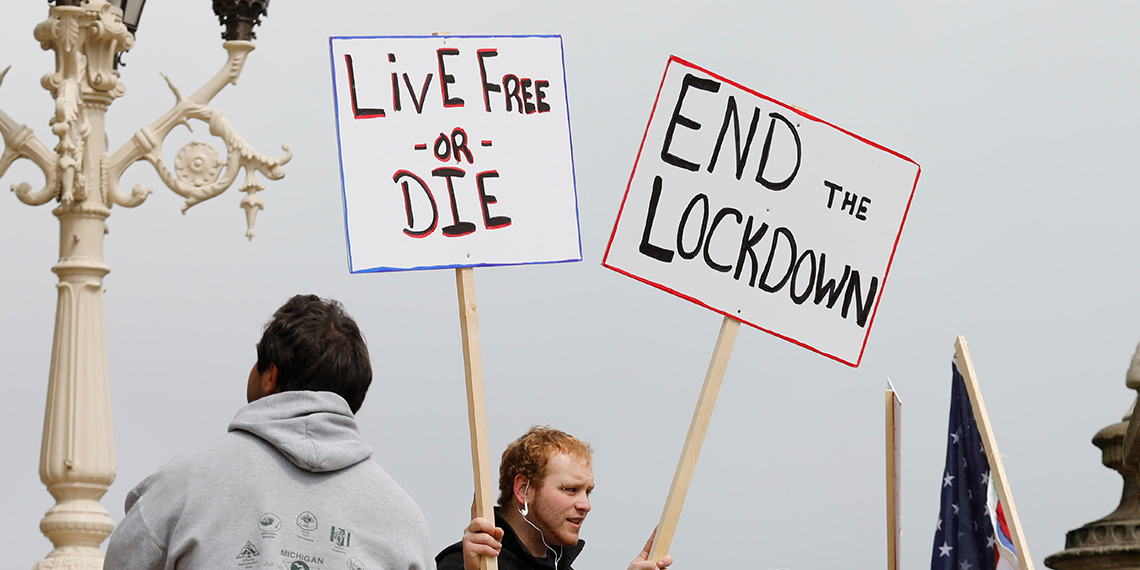 The Most Ironic Signs At Social Distancing Protests

As you may have heard, some people are getting sick of social distancing. Well, I mean, we all are, for the most part, but some people are so tired of it that they are gathering to protest.

Across the country last week, people gathered in places like Michigan, Ohio, and D.C. in protest of the shutdowns, aka breaking social distancing rules and sharing germs in the middle of a pandemic, all in the name of freedom and our right to hang out at Outback Steakhouse.

In short, we have the right to gather and protest, it’s just not the wisest tactic right now, given the circumstances. And neither is reopening things. These are short term releases and solutions for a long time problem. While I understand people’s frustration and sympathize with those who need work to survive rn, it is hard to feel bad for some of the people who held up signs that were problematic at best, and absolutely toxic and f*cking stupid at worst. Here are some of the most unforgivable signs from the social distancing protests.

Ah yes, the best way to protect the vulnerable is to bring a child to a crowded space during a global pandemic.

The mental gymnastics for this is outside of my athletic abilities.

White people using references to slavery in the US to describe their current situation of politely being asked to stay at home for a bit?  We absoluteeeeeeelyyyyyyy hate to see it.

Again. Let’s maybe not compare this to slavery.

Conservatives: Maybe you should have used protection

Liberty is kinda futile when you’re dead, no?

Well, in that case shut it down!!!! People are dying, but *this* woman wants a haircut!!!!

then pick up some scissors Karen! no one should have to risk their health and families for your bob upkeep https://t.co/Qap1RyBOgZ

Op, looks like they’re down with socialism. Let’s draw up the paperwork and get this party started!

Well, thanks to #COVID19, the absurdity has now come full circle. After years of US right-wingers smearing Sweden as a radical feminist, globalist, cultural Marxist, Islamist-loving hellhole…Trump's MAGA army are now holding up signs reading "Be Like Sweden!" pic.twitter.com/7gkTW7ApfL

For anyone who doesn't think the protests are about privilege…#COVIDIOTS pic.twitter.com/PfAkCd6ZeG

Just gonna leave this one here.

It's a wee bit ironic, he's in scrubs and she's hanging out the passenger side of her best friend's ride trying to holler pic.twitter.com/T2g2UeafA8