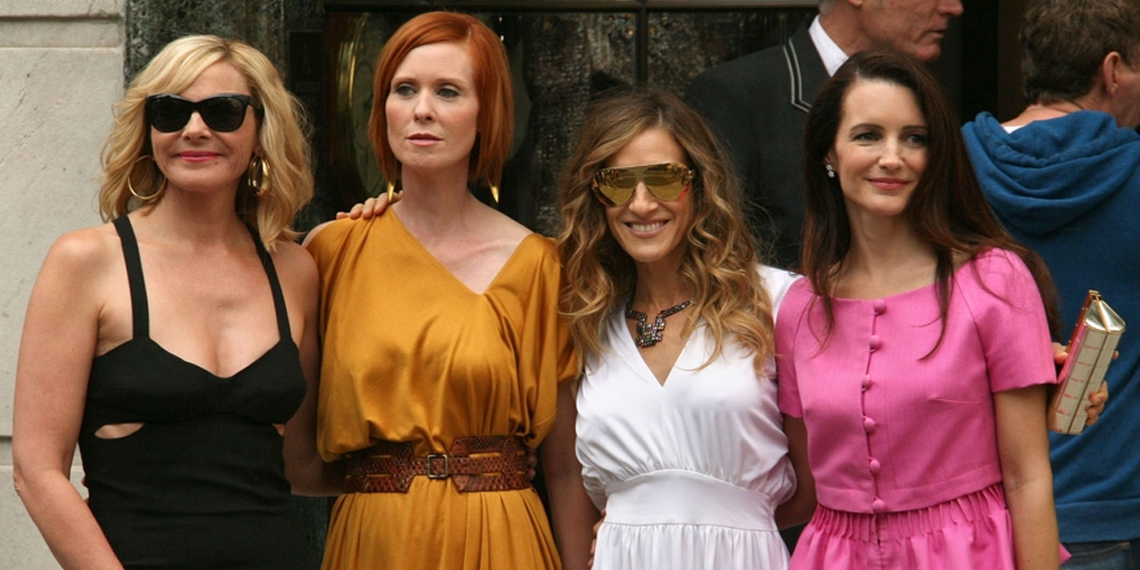 The legacy of Sex and the City has been debated hotly and often since its debut. As an avid fan—like, own-a-SATC-branded-tote-bag avid—I’ve faced a wide range of reactions. More often than not, I’m made to feel I should be embarrassed, if not apologetic. It makes sense—SATC haters see, at best, a grating six-year chick flick. At worst, they see a cesspool of materialistic internalized misogyny. And while I see (and cringe at) those aspects, I also see an exploration of women’s problems that no one else was putting on TV. I see a defense of the right to care deeply about things men laugh at, or dismiss. So, is Sex and the City sexist? In the interest of deciding once and for all whether I’m going to apologize for my love of SATC, I’ve compiled a list of the show’s best and worst moments, sexism-wise. Let’s dive in.

There’s a hilarious scene after Samantha is called “emotional” at work. That’s code, she explains, for “I don’t want to hire this woman.” Charlotte is still haunted from the one time she cried 10 years ago. Miranda has cried, but only in the privacy of her office. Samantha has never cried; Carrie faked crying to get out of a deadline. The girls inform her, with annoyance but no real anger, that she’s making all of them look bad.

This is where SATC shines—it presents the expectations women are faced with, and explores their options. There’s a huge power just in naming this dynamic they’ve all faced, and even more in not laying down a judgment on how they handle it. Even Carrie, who gets the most heat for playing to men’s expectations, is gleefully frank in her reasoning: “Boo hoo, it was 80 degrees and sunny.” I fully respect that, and I equally respect Miranda fleeing to her office. They’re just doing what they can to live their best lives.

The depiction of the women’s careers—other than Miranda’s—I find troubling for a few reasons. Both Samantha and Charlotte frequently sleep with people they should be treating as clients, muddling the success they’re then seen to enjoy with their desirability for men. Carrie by definition is sexualized in her work—and tops it off with a level of incompetence (that girl needs several months of computer classes) that brings any professional success into serious question. If three out of four successful women have their careers depend on men finding them sexy, and every single one of those instances is met with reciprocated desire instead of discomfort, that’s a problem for me.

Trey is both Charlotte’s downfall and her saving grace. At first, he’s everything terrible that she wants—he’s the white knight of all her worst Victorian daydreams. But once the wedding’s over, it’s immediately hollow. They don’t have sex. He refuses to discuss it. If she wants sex or openness in their marriage, she’s on her own. And, as women do in a crisis, she handles it like a boss. Charlotte, a woman who has never willingly looked at her own vagina, becomes an overnight expert on the physical and emotional triggers for ED. She handles it with more comfort than her literal doctor of a husband. And eventually, she leaves him, giving up the option of continuing in a picture-perfect marriage. Charlotte realizes she needs an equal partner who will fight as hard as she does, even if it isn’t easy. This is a lovely moment because Charlotte is almost strong in spite of herself. You can feel how badly she wants it to work.

Speaking of women being strong, let’s discuss Carrie’s kryptonite: Mr. Big. (I’m totally Team Big over Team Aidan, no one from either camp @ me.) But Jesus Christ. It’s oft repeated in the show and in subsequent interviews, like this one from Chris Noth, that Mr. Big is “honest.” He’s honest that he doesn’t want a serious relationship, that he can’t commit. You probably recognize this line from every college fuckboy, because 22 is the suggested age cap on accepting this bullshit.

The thing his, Carrie is honest too. She might not be as on-the-nose about it as Big, but that’s because admitting you like someone and want to be with them is a lot scarier than saying you don’t want those things. It’s evident to anyone with half a brain that Carrie wants a relationship, that she loves him. And yet, the storyline here is largely of Carrie being dumb for letting a guy repeatedly ruin her life. Why is everyone on this show, Carrie included, forced to act as though Big was incapable of leaving her the fuck alone?

Carrie: Just let me be happy.

The scene where the girls discuss anal sex in the back of a cab is among the show’s most iconic. In under five minutes, they lay out all the considerations a woman must make before engaging in sexual activity. Yes, desire is on that list, but as women, it’s never the only thing we have to consider. There’s the shift in power. The longstanding effect to your reputation. Whether the request contained adequate regard for your comfort and enjoyment. What it would mean if you said no. As with the discussion of crying at work, the options are laid out, not judged. What for a man amounts to “do you want to” is revealed in all its complicated, messy glory for women. Watch it just to see Carrie deliver this line: “Sir, we’re talking up the butt. I think a cigarette is in order.”

*Carrie during this conversation:*

I have neither time nor energy to delve into SATC’s overall BAD treatment of gay people. To stick to specifically sexist moments, let’s all admit that Samantha’s brief lesbian relationship was more than a little embarrassing. It was a dull, insulting imagining of how men picture lesbian relationships. Samantha leaves her girlfriend because “too much talking” and because she can’t live without a healthy amount of dick in her life. I’m not saying every minute aspect of this was unrealistic, but it was the most uninteresting scenario possible. It affirms absolutely nothing beyond dull tropes like “women are all talk and no sex” and “dick cures all.” No, and definitely not.

The only acceptable type of Samantha breakup:

While SATC covers “small dramas”—dating, friendships, shopping—I refuse to call those issues petty in a negative sense. I care deeply about all of those things, and I love that SATC offers a defense of being “petty,” of caring about things deemed too “small” in the face of Important Manly Tasks. Men scoff at so many so-called “feminine” things because they have the option of doing so. (If men faced the same judgment for going makeup-free, for example, they’d all be up at 6am with contour kits.) Sex and the City, in my opinion, is a portrayal of what it’s like to simultaneously live within and struggle against society’s expectations. It’s not perfect, but it’s not stupid or negligible either. Is Sex and the City sexist? Sometimes. But among so many other deeply sexist TV shows of the 90s, I’d argue it’s a better choice than most.