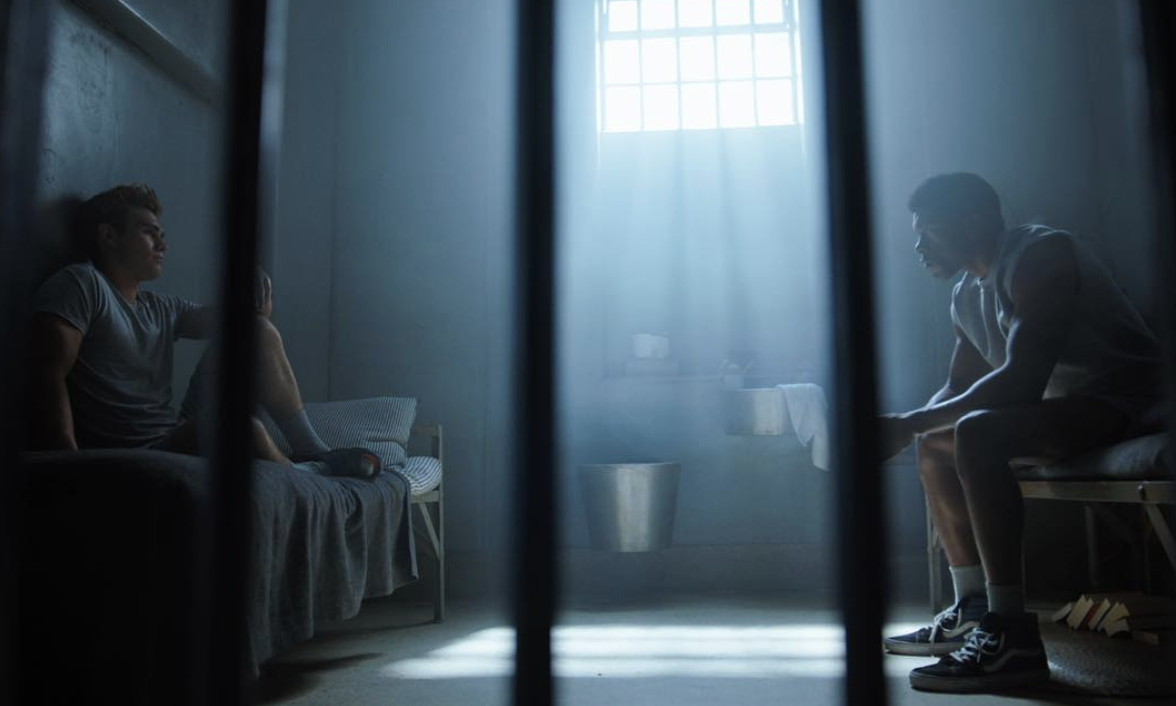 Welcome back, people, to another thrilling episode of Riverdale! Well, not so much thrilling as utterly ridiculous and not within the scope of reality, but you get the gist. Last week we realized just how broken the Riverdale justice system is, and lowkey how broken the Riverdale writers’ understanding of the legal system is. When last we left off, Archie was headed to juvie wearing his Sunday best, Jughead discovered a dead Dilton Doiley (yes that is a real name) all carved up in front of a weird altar, and Betty saw her infant niece and nephew FLY INTO THE AIR. So, just another Wednesday in Riverdale I guess. Shall we get started?

The episode begins with Archie’s first day of prison, which looks suspiciously like a wet t-shirt contest. I’m finding it hard to believe that these guards would power hose JUVENILES like they’re rabid dogs, but okay. This isn’t Shawshank, it’s Riverdale!

We also learn that Betty is alive and well. She only had a casual “stress seizure,” which caused her to pass out and is supposed to explain why she thought Polly’s babies could fly. So I guess they’ll just be normal, run-of-the-mill incest babies with webbed feet, but no flying. Good. Also, can someone with an actual medical degree please confirm that a person can actually have a seizure from being “too stressed?” Because if that’s the case then I’m genuinely concerned for my health.

Betty’s like “I’m fine but what about Juniper and Dagwood??” JUNIPER AND DAGWOOD. I know Polly is supposed to be a farm person now but MY GOD those names are f*cking terrible.

Back in the jailhouse, Archie meets his cellmate for the first time and his name is Mad Dog. Jesus Christ. Is no one called, like, Jimmy anymore? No more Will? What about Dan? COME ON CW, YOU’RE KILLING ME.

Lol I love that Archie just flashed his Serpent tat in the yard as if it means sh*t. He’s like “FP Jones and Jughead said I could hang out with you guys? Did you see my tat?” First of all, Archie, your “tat” looks like it was spray painted on at the country fair. I’m surprised that overly aggressive hosing down earlier didn’t wipe it clean off your body.

Elsewhere, it’s date night for Betty and Jughead and they’re getting frisky in the morgue. I wish I was joking. Also, why is this coroner letting two high school kids take pictures of a dead body? Like, what are they using those pictures for? The school newspaper? Foreplay? Both??

Archie is hanging out in the prison music room, because YES THIS PRISON HAS A MUSIC ROOM and, yes, The CW is still trying to make Archie The Tortured Artist happen. He shouldn’t be hanging out there all alone though, because one, he looks like a dipsh*t, and two, he doesn’t have the Serpents’ protection anymore. Shockingly, the Serpents don’t think his tattoo is legit, and want him to shiv–SHIV!–a rival gang member. Archie refuses and I guess is now writing a song about it in the music room.

The Ghoulies find him there and they’re pissed because Archie snitched on them for street racing and now they’re stuck in juvie presumably for life. For street racing. I’ve said it once, I’ll say it again: Riverdale is a broken city. They’re like “nice shoes, we want your shoes” but, like, are “shoes” a metaphor for something here? Like Archie’s ass? ‘Cause that’s where it feels like this conversation is going…

Cut to Archie meeting Veronica during visitation hours and he is not looking great.

VERONICA: Why are you sitting that way?

LOL. Veronica, please be chill. Your boyfriend probably just had a “shoe” shoved up his ass.

Betty runs into the daughter of the leader of Polly’s farm. She says her dad is Edgar Neverever and I honestly can’t believe that is a name The CW is actually trying to pass off as real. Like, is this the best the Riverdale writers can come up with?? When Betty said that name last episode I genuinely thought she was just speaking jibberish to make a point.

Cut to Pop’s, where Veronica wants to start shit with Cheryl because she stole Archie’s school presidency. Honestly, V, he may or may not have had a gang member shove his shoe (or something else idk) up his ass. He has bigger things to deal with other than whether or not he needs another extracurricular activity for his college application.

VERONICA: I’m not serving you. I refuse.

CHERYL: You can’t just refuse to serve someone for being better looking than you.

F*cking SLAY, Cheryl!!!  I’ve said it once I’ll say it again, Cheryl Blossom is a godd*mn national treasure. Bless you.

Lol Riverdale dragging the Innocence Project into their damn trash show. I’m sure that once they’re done working tirelessly to get Steven Avery out of prison they’ll be VERY thankful to The CW for the free publicity.

Veronica keeps talking about how she’s just going to “open a chapter” of the Innocence Project in Riverdale. She’s making it sound like it’s some sort of demented sorority. Will there also be a t-shirt and a social chair at this chapter? Hmm?

VERONICA: *makes vague statement about single-handedly leading a nationally recognized institution in Riverdale* *compares it to putting on a sorority philanthropy event*

Veronica buys Archie another pair of sneakers and YOU GUYS the sheer look of panic on his face rn is making my whole damn week. You know he’s like like f*ckkkk where can I hide these sneakers so I don’t get it up the butt again? Good luck, kid!

Archie goes out into the prison yard to show off his new sneakers and beg everyone to play football with him. I paraphrase. He’s like “why do we have to shiv each other all the time? Why can’t we just all get along like we used to?”

Meanwhile, Jughead and Betty are off traipsing in the woods again looking for more murder. And HOLY F*CK what is that beast they just ran into in the woods? Are they both abusing Adderall? Is this another stress seizure? What am I looking at rn???

“G” is for you-know-who… New #Riverdale on Wednesday, with the most shocking ending we’ve ever done, and that includes FP carrying Jughead…????????☠️

Archie and Mad Dog have a heart-to-heart and we learn that Mad Dog is serving a sh*t ton of time. Like, 20 plus years. I would LOVE to know what he did to deserve 20 years when Archie murdered someone and only got two plus a football game with his pals. RIVERDALE IS BROKEN.

Sooo Dilton did commit suicide? Betty and Jughead think he was playing some sort of demented game and accidentally drank rat poison in the process. What ever happened to truth or dare, kids??

Also, should the leader of Riverdale’s Innocence Project be behaving this way? I guess shaking your *ss at prisoners is an innocence project in its own way??

Hiram shows up mid-dance sequence and tells Veronica that he doesn’t want her to grind on other girls in front of prisoners during her spare time. Which, like, fair.

HIRAM: My seventeen-year-old daughter shouldn’t be behaving like this in front of inmates!

Yes, that’s real mature, sweetie. PLEASE say someone is recording all of this for the Innocence Project.

Veronica basically tells her father LIKE HELL will she leave a musical number before the performance is over. The show must go on, I guess. We all have to stand for something. So Hiram sends in the f*cking riot police to break up the football game. AT A JUVENILE DETENTION CENTER? Like, why aren’t any of these cheerleaders whipping out their phones and recording this? This juvenile hall would be shut down like that. Seriously, I feel like I’m taking crazy pills!

After her little stunt at the prison, Veronica gets blacklisted from visiting. She gets a fake ID and steals one of Betty’s wigs so she can become “Monica Posh” and visit Archie. When I was in high school I used my fake ID to buy wine coolers and get drunk in my parent’s basement, but okay.

Ooooh this should be interesting. Hermione calls all the parents together for what looks like a v secret meeting. Apparently they also played the creepy game Dilton and Ethel played?? And they’ve been keeping it a secret since high school? I’m just so… confused.

The last five minutes of this show are legit bonkers because Dilton’s friend, Benjamin Button, who survived the sacrifice at the altar, commits suicide in the hospital. I’m sure he will return as an old man aging backward.

And on that note, I’m out betches! In addition to ripping off The Shawshank Redemption, I’m sure The CW will come up with new and exciting ways to rip off Fight Club next episode now that Archie is the warden’s new Mad Dog. Should be lit!