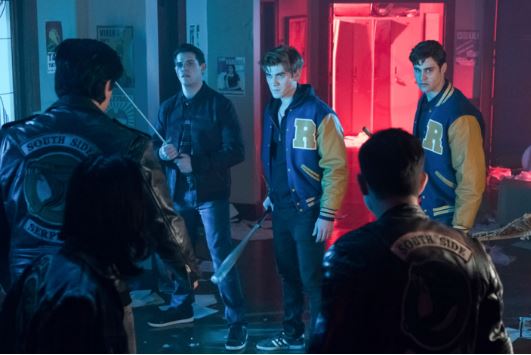 Well, fam, we’re in the home stretch! We’ve survived yet another episode of Riverdale. A large contingent of sinners have been murdered and we’ve identified yet another Black Hood. I’m still hopeful the final Black Hood will murder Hiram Lodge and we can be done with his fucking stupid plot line and the Kelly Ripa bribery money funding it. Anyways, shall we get started?

The episode opens with Cheryl in deep shit. Like, The-Black-Hood-is-at-her-front-door deep shit. He breaks down the door and tries to do what I’ve only ever dreamt of doing to my exes: taking an axe to everything Cheryl knows and loves. So sweet.

Cheryl somehow manages to escape, change her outfit, grab a spare cape, and get out her archery kit in the time it takes for The Black Hood to walk down one flight of stairs. Normally, I’d rip a plotline like this to shreds, but since Cheryl is the one I’m supposed to suspend reality for I’ll accept it. Carry on.

Okay, but what are the rules of this town? A minor is brought into a hospital with a gunshot wound and they tell him to take a number?? Is the governor of New York aware of what’s going on in this godforsaken town?

Cheryl sets out to hunt down The Black Hood BY FOOT armed with only her bow and arrow. Lol k. Like, just because you took one archery class doesn’t make you a fucking expert, Cheryl.

CHERYL: I’m going to track down The Black Hood with nothing but this bow and arrow and the blood dripping from his wound.

Meanwhile, riots are breaking out into the streets of Riverdale. It’s like a scene out of The Purge except the sheriff is more concerned about harassing the family of a gunshot victim than taking back his town. Sure.

As if shit couldn’t get any wilder, Hermione decides to put a bounty on The Black Hood’s head. One million dollars goes to anyone who can catch him dead or alive. Because why trust law enforcement and high school juniors to handle catching a serial killer?

Sweet Pea and Archie get into it at the high school. Sweet Pea is convinced Reggie shot Fangs even though Midge’s mom already confessed to it. He’s like “you’ve taken my home and my friends and all my human rights so I’m going to burn down the thing you hold closest to your heart: this high school.”

Okay Sweet Pea, I think you’re overestimating how much anyone likes high school.  I mean I know we’re talking about Archie here, a guy who literally showers in his letterman jacket, but come on.

Betty gets a call from FP saying that her dad is in the hospital. So I guess this means he is The Black Hood? It’s very confusing tbh but there’s a fan theory floating around out in the world that Hal could be a twin and the twin could be The Black Hood, which is funny because I didn’t realize The CW had hired Marlene King to come in and write away all their plot holes.

Lol why does The Ghoulies’ gang leader look like Bella Thorne’s boyfriend?

The Ghoulies show up at Pop’s looking to start some shit. Poor Pop. Why is his chocolate shoppe always the start of a gang war? Archie comes up with the brilliant idea of throwing FLAMING LIQUOR BOTTLES out into the crowd full of minors. He’s reallyyy banking on his dad winning the mayoral race, huh? That’s the only way I can see a death by flamethrower as publicly accepted in this town.

Speaking of Fred, he shows up with Sheriff Keller and FP. Their presence is somehow more intimidating than Archie’s homemade firebombs and The Ghoulies scatter. The fact that Sheriff Keller didn’t lose his shirt even ONCE in this scene feels like a missed opportunity, tbh.

Also, I pride myself on having watched every single second of Law & Order: SVU to ever be aired so I know that when a cop gets fired they have to give up their badge and gun immediately, and yet, somehow Sheriff Keller gets to keep the cruiser? “You can keep the car sir, but I’ll need that little star you wear on your shirt.” What is the new sheriff driving? Is he catching a ride in with his mom? These are the questions that keep me up at night.

Elsewhere, Veronica tries to convince her mother that her dad’s a fucking psycho. She found out that he’s planning on leaking some damning photos that prove Hermione and Fred had an affair last year. I guess he thinks that the town will blame Fred and not Hermione for the affair but, like, does he realize how sexist America is?? As if a mistress has ever come out on top after a sex scandal. Please, Stormy Daniels isn’t the one who’s President right now.

Betty shows up at the hospital but Hal/The Black Hood has already killed the doctor. Somehow he has the landline number for the hospital and calls Betty from her random location in said hospital and tells her to come home or he’ll kill Alice.

HAL/MAYBE THE BLACK HOOD: We’re all gonna sit down and watch some home movies

BETTY: See what I mean he’s a fucking psychopath!!

Hal shows them an old family movie, which is not only creepy and disturbing but also seems to fill every single plot hole The CW has been trying and failing to write themselves out of all season. It’s v v convenient. Apparently, Grandpappy Cooper was the original Black Hood who murdered the Conway family way back when and now Hal is following in his father’s footsteps to take out all of the sinners in town. Tbh I think I’m more shooketh that Hal is supposedly short for Harold.

Cut to Archie’s house where there’s ANOTHER Black Hood. I’m not sure what’s going on here but there better not be a goddamn twin twist or so help me…

Elsewhere, Jughead tries to rescue Toni from Penny Peabody. If you’ll recall Jughead went all Fight Club on her ass when he mutilated her before banishing her from town. He looks visibly shocked that she’s still holding on to that grudge.

PENNY: I told you I’d be back

Cheryl and her bow and arrow show up as Jughead’s back up for the fight. Jesus. They’re really running with this Katniss Everdeen vibe, aren’t they? Like, where does one even buy real arrows like that?

Meanwhile, Small Fries shows up looking for the Lodges and he ain’t so small. What a clever play on words, Mr. Fries.

Back at the Cooper household, Hal is still trying to explain why he’s into murder. He says that he went after Fred because Fred is an adulterer. Alice is just like “k but didn’t you cheat on me with Mrs. Blossom? A known prostitute?”

Lol this is the epitome of white male hypocrisy. I can’t.

Alice is trying to distract Hal and tells him about her affair with FP. She’s just is like “well I stepped out with FP and he’s a real man in every way that counts.” Okay, first of all, DETAILS, ALICE, DETAILS. Seriously, I need some sort of flashback scene here because I’ve been waiting two goddamn seasons to see FP shirtless.

Jughead realizes that Hiram is the mastermind behind the riots. He couldn’t buy out The Serpents so he’s trying to…kill them? Honestly, it’s not airtight but I’ve given up trying to understand the motives that drive these losers.

Jughead decides that he’s going to sacrifice himself to Penny so she doesn’t start a war with The Serpents. Great plan, Jughead! Literally nothing could go wrong! Side note: if The Ghoulies don’t kill Jughead, a string bean of a teenage boy, do they really even deserve to be called a gang? Hmm?

Not but one scene later FP and the gang find Jughead all bloodied up on the field. I’m not even going to give The CW the satisfaction of freaking out because I know for a fact they aren’t going to kill off the only reason half of us even watch this show. Plus, Lili and Cole just went public with their IRL relationship and there’s no way in hell The CW isn’t going to use that to their advantage. Please.