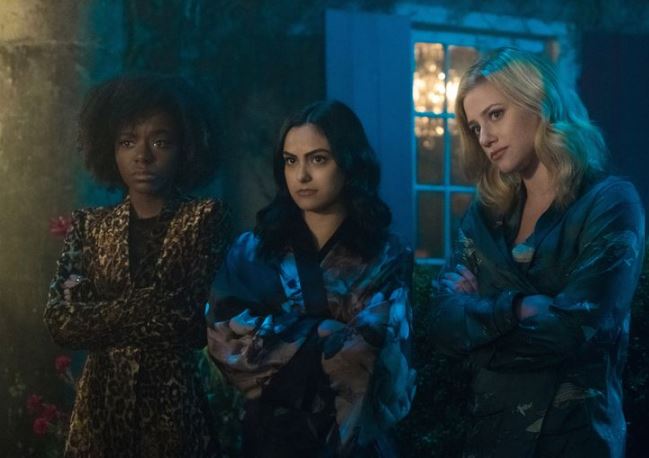 I’d like to start this Riverdale recap off by saying that some sort of  miracle took place in my living room last night, because somehow I was able to stream this shit during a snowstorm with my shoddy internet service. Normally, if it rains in Alaska then I have to bum my internet off the cafe next door for a few days until Optimum decides they want to fix the outage. So count your fucking blessings that this Riverdale recap is even happening. K. Moving on.

The episode starts with Betty confronting Chic about the DNA test and, as it turns out, CHIC IS THE PROM BABY.  He’s just not a Blossom aka Hal’s kid. Sooo he’s definitely FP’s child, right? Not only does this information make Jughead and Betty’s relationship, like, icky, but it also brings me one step closer to confirming my theory that Jughead and Betty are semi-siblings and that Chic might be the real Black Hood. I honestly haven’t felt this smug since I correctly identified the killer before the BAU did on Criminal Minds.

Chic just did that smirk thing that any child who just fucked over their older sibling and got away with it makes. Tbh that’s the clearest indicator that he’s actually related to Betty.

Lol Jughead is going on a hunger strike. I like that no one, not even his extra AF friends, are going to support him on this one. Also, I don’t think he quite understands how a hunger strike works? Like, he’s not even advertising it. When I start a diet, my roommates, entire family, coworkers, and every stranger I run into on the street knows about it by lunchtime.  Just saying.

Everyone is up Veronica’s asshole about whether she knew of the prison plan and it’s like, OF COURSE she knew. What, have you been living under a rock for the past two seasons? There’s nothing that goes on in the Lodge household that V and her eyebrows don’t know about.

What happens next is the most beautiful display of girl-on-girl warfare to happen on my screen since Cady Heron introduced the Kalteen bar to Regina George. Ethel (who I completely forgot was even on this show tbh) is pissed about the whole prison thing/Hiram making her dad lose his job thing and douses Veronica with her STRAWBERRY milkshake. Which is the ultimate offense, because strawberry is the shittiest of the milkshakes.

Veronica is like “you know what will help people hate me less? If I take over this school and become Student Body President!” As if anyone that hated by their constituents could actually become president. Oh wait.

Meanwhile, Jughead continues to talk mad shit about the Lodges under his breath, which is not unlike how I act when I’m late to a department meeting and miss out on all the free donuts and coffee, but not Carol’s innovative new plan for the phone tree system.

ARCHIE: Do you need a Snickers?

Just before Cheryl can officially welcome Toni to the team her nana falls from the second story balcony. Cheryl’s like “I don’t think this was an accident.” I tend to agree with her because literally everyone in her family is trying to kill someone. That’s the power of maple syrup I guess.

CHERYL: I think my uncle pushed my nana down the stairs

ME: Yeah, and the sky is also blue today so what’s your point?

I’m listening to Jughead defend South Side High and all I can think is he’s definitely using this little stunt to get into a college above his station. Like, he went to South Side High for ONE WEEK, where is all of this school pride coming from?

Betty finds Chic and Kevin laughing it up in her kitchen. Chic’s like “I know about the whole catfishing scheme but we still talk.” This is dating in the modern age, people. Someone will literally lie about their identity and all of their intentions and you’ll still go on a date with them because you’ve seen worse. 2018 is trash.

Jughead decides that the next logical step in his “Take Down Hiram Lodge Plan” will be to chain himself to the school that’s about to be torn down. God, he’s so extra.

Okay, what in the actual fuck is Betty doing rn? She’s holding a lit flame to Chic’s unconscious body. You know she’s going to give Jughead a “u up?” text after this because nothing turns that girl on more than threatening people while they sleep.

*FIVE SECONDS AFTER THAT LAST SCENE*

BETTY: Jughead why didn’t you call me last night??

WHAT DID I SAY PEOPLE. Betty goes to visit Jughead and his cause and she’s like “I would have brought you blankets? Or an over the pants handy at the least?” God, Betty, never change.

Elsewhere, Veronica decides that the best way to win over her fellow students is to lock them into a room and force them to listen to her sing. Ronnie, no one wants to see a beautiful, talented person win at anything in life—especially in high school. Tone it the fuck down.

Ethel has no chill and is on a fucking mission to become take down  the Lodges and she’s even got Veronica’s receipts to prove it.

Okay, Alice confronting Betty about Dark Betty while Chic smirks in the background is the best thing I’ve ever watched in my entire life.

ALICE: Where in God’s name did you get this cabaret wig??

CHIC: She wears it to have sex with Jughead!

I feel like Alice is way less pissed at Betty having sex with her semi-sibling than the whole acting-out-her-daddy-issues-in-a-wig-on-an-online-platform thing. I guess incest is small potatoes to this family.

And the truth finally comes out: FP and Alice did bang, and for once Betty has the appropriate expression upon finding out disturbing information.

BETTY: Is there a chance that me and my boyfriend share a brother?

Betty goes after Chic again and it blows up in her face. I love that she tried to threaten him with a murder SHE COVERED UP. As if he wasn’t going to throw her under the bus the first chance he got. This is what you get for playing in a crime scene, Betty!

Chic screaming “you scare me, Betty!” is literally what I’ve been doing for two straight seasons now.

Mrs. Blossom is about to kill Cheryl and grind her bones into the next batch of maple syrup for the town. She knows that Cheryl knows she’s trying to kill off the remaining Blossoms for power. I swear to fucking god if The CW kills off Cheryl I’ll have no choice but to continue watching this show because it’s so goddamn good. I won’t be happy about it though!

Wait so Hiram wants to go after Jughead for his shitty hunger strike? Seems… extreme.

Lol I love that Archie and his wrestling bros are now both the unofficial police force of this town as well as Hiram’s lackey’s. Even mob bosses would rather hire unpaid interns. God, Archie is such a fucking dumbass. He will literally believe anything anyone tells him ever.

Archie goes to face off with Jughead and it is more extra than Cheryl’s broaches. Jughead is acting all shocked that Archie would side with Hiram over him, but honestly what did he expect? The boy can barely tie his shoes in the morning without an adult showing him how.

Jughead decides to run for student body president and wants Betty to be his running mate. Because that’s not a conflict of interest or anything. She’s like “sure but only if I can move in!” I love how Jughead just agrees as if no parents need to be involved in these minors’ decisions about where they’ll live.

Fred decides to run for mayor against his ex-girlfriend, and his ex-wife looks way too fucking giddy at the prospect of ruining a homewrecker’s career. She’s like “fuck Chicago! Riverdale is where I want to be.” You know what they say, nothing gives a divorcee more will to live than watching a hot mistress go down in flames.

You can practically see the wheels turning in Archie’s pea-sized brain. How he’s going to be loyal to both Hiram and the man that fed, clothed, and loved him all of his life is going to be fun for me to watch.

The episode ends with Cheryl waking up in a fucking conversion camp. WHAT. NO. WHY.

You know shit must be messed up in there if Cheryl willingly subscribed to that hairstyle. And on that note, I’m out. Can’t wait for next week when we find out if those pigtails were an actual life choice or a form of torture. Only time will tell!