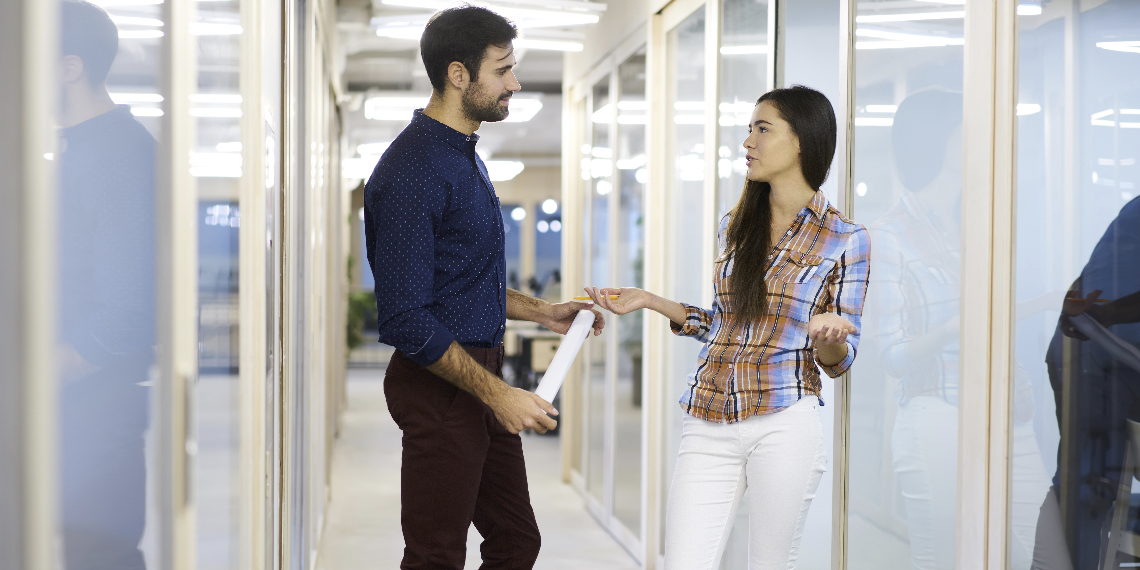 QUIZ: Is She Flirting With You, Or Is She Your Coworker Asking For Feedback On A Presentation?

Ginny Hogan has written for The New Yorker, The New York Times, Cosmopolitan, and McSweeney’s. Her first book, Toxic Femininity in the Workplace, is available September 10th. Pre-order here.

Having women at your office is tough. Nobody asked you if you wanted them there, which feels unfair. One particularly challenging aspect is figuring out who is trying to sleep with you (smart) and who just has bad taste (un-smart). If a woman seems to be interested in talking to you, you might not know if she’s flirting or trying to “collaborate.” To figure it out, take our quiz!

Did she schedule a meeting with you via:
a. Your phone number, which she asked for twice (some women are assertive, what can you do?)
b. The office scheduling tool

Did she send an email saying she wanted your thoughts on:
a. Her eye makeup—she’s open to doing darker if you’re into it
b. If she should swap slides 16 and 18

When she writes your names on the presentation, does she:
a. Put hearts around yours
b. Choose to live heart-free

When you run into her in the hallway, does she say:
a. “Hey handsome”
b. “Hey, have you had a chance to look over the deck I sent last night?

On a Monday morning, does she ask you about:
a. Your love life—did you #pound this weekend? If not, are you looking to next weekend?
b. The email she sent two hours ago

Does she end her emails with:
a. Thanks, babe
b. “Regards”

Does she regularly compliment:
a. Your abs
b. Your choice in font size, because she can’t think of anything else to compliment but she knows men need constant encouragement

When she said “great job”, did you notice her wink and bat her eyes?
a. Yes
b. No, but what even is “batting your eyes”?
c. Yes, but she did stay up all night drinking coffee to prepare this presentation, which you didn’t actually help her with, so the eye-batting could be very much be an exhaustion-related twitch.

Have you swiped right on her on every single dating app and still not matched?
a. No
b. Yes
c. That’s a very personal question

Has she explicitly told you already she’s not flirting with you and not interested in you?
a. Not yet
b. Yes

If Mostly As: She’s sooo into you. She probably took the job because of how badly she wanted you—it’s unlikely that she just wanted to work. In fact, you’d be an irresponsible coworker to her if you didn’t continue hitting on her until she sleeps with you. Part of working with women is giving them what they want.

If Mostly Bs: She wants feedback on a presentation, after which she will be into you. The thing about women is sometimes they need help with things, but that doesn’t have to detract from how badly they want you. After all, you are a brain and a body, so why wouldn’t she want both?

If neither: She hasn’t indicated any desire for feedback, which means you should give it to her unsolicited (it’s what women want). And even though all signs point towards her not being into you, she definitely is, because she’s a woman at your office. Key word being “woman.” Other key word being “at.” She’s there—she wants you.

If both: She needs you and she wants you. Actually, this is true regardless.

Ginny Hogan has written for The New Yorker, The New York Times, Cosmopolitan, and McSweeney’s. Her first book, Toxic Femininity in the Workplace, is available September 10th. Pre-order here.