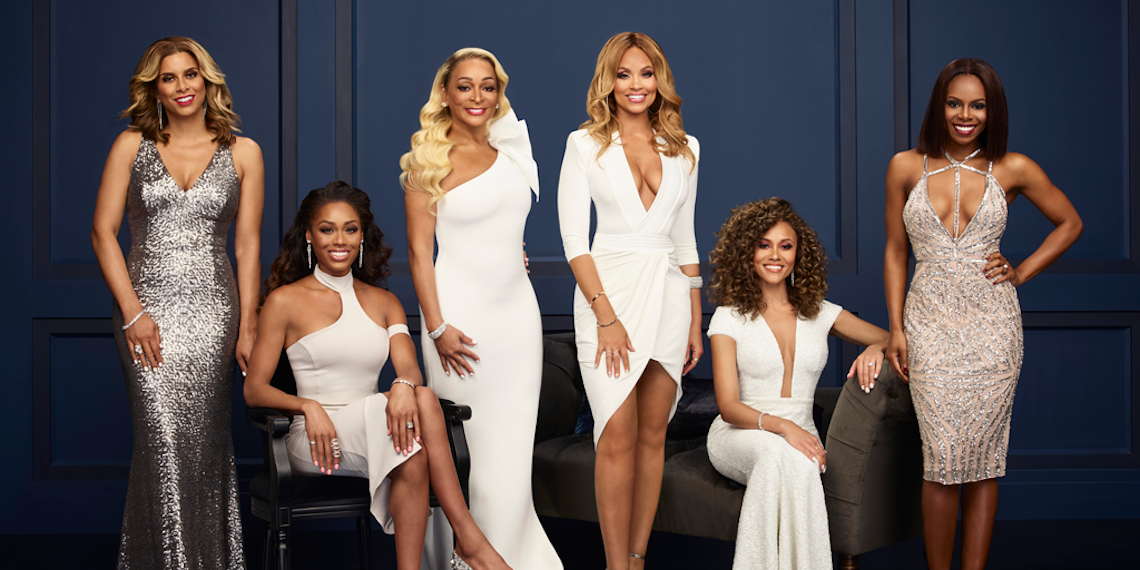 PSA: Stop Sleeping On ‘The Real Housewives Of Potomac’

The first season for any show can be difficult, especially when you have the fanbase Bravo has. We are passionate, outspoken veterans of reality television, so it’s hard to watch new shows try to find their way. We have grown accustomed to the Bethennys, the Nenes, and the Teresas, who know the game and play it well. So when Bravo announced Potomac and Dallas were going to be added under the Real Housewives umbrella in 2016, I was hesitant. But I did what any devoted fan does, and watched both franchises when they first aired. And I wasn’t impressed. Dallas was all about the charity scene, and Potomac was constantly talking about etiquette. I just didn’t connect with either city, because there wasn’t anything I could sink my teeth into.

But for the past year or so, my best friend Steve who runs the Instagram account @FacesbyBravo (follow him, he’s hilarious) has been begging me to start The Real Housewives of Potomac. Since I was jaded by the first season, I kept pushing it off. And guys, I WAS A DAMN FOOL. Giving Potomac a second chance was the best decision I have made in a long time. That, and deciding to get eyelash extensions.

The fourth season is airing currently, so I started by dipping my toe into the third season. This is what I recommend for anyone who wants to give this franchise a chance. Season three gives you a lot of flashbacks into the second season, so you’re caught up fairly quickly. And let me tell you, it does not disappoint.

First, let me break down the women of Potomac. Karen and Gizelle are already Bravo royalty. They are some of the most iconic housewives I have ever seen, and have done so much in such a short amount of time. Truly, everything that makes you a great housewife. Monique is an amazing addition, she gave us the umbrella moment in season three, and she is one of the most beautiful people to ever be on television. Ashley is one of the messiest housewives I have ever seen, while simultaneously getting her yoga certification. I love a contradiction. We get introduced to Candiace in season three, but wait till you get to season four, because Candiace really shines. I don’t want to spoil anything, but I will say one thing: butter knife. And to finish out the cast, we have Robyn. Some may say “oh she is boring”, or “what does she bring to the show?” And sure, on the surface Robyn might seem boring, but she is the glue that grounds these women in reality, and she is BEYOND gorgeous. Also, America is always rooting for her and Juan to get back together.

These women offer us something so many cities have failed to do in recent years, and that is giving us vulnerability while having fun. That is it. They are having fun. They don’t feel tired, or played out. They aren’t afraid of confrontation, and are always ready to meet for lunch and have a sit down to “work it out”. Their families play a large role in the show as well: Candiace has an emotionally abusive, codependent relationship with her mother, Ashley confronts her father, who abandoned her at a young age, this season, and Gizelle tries to balance being a single mother to three teenage daughters. It is a lot, and they do it flawlessly. OH, and did I mention they are hilarious? Ashley has some of the best one-liners, and you can always look to Karen to give a GIF worthy reaction.

The Real Housewives of Potomac has quietly become the second-best city in the Real Housewives franchise. Obviously, RHONY is forever my number one (and if anyone from Bravo is reading this, let me tell you, if you so much as touch a hair on Ramona Singer’s head, there will be a riot in these streets. We already lost Bethenny, so this isn’t up for discussion). The women of Potomac deliver in ways we haven’t seen in a long time from a lot of our OG cities. They are breathing new life into the franchise, and the other cities should be taking notes.

As someone who has been watching The Real Housewives and all of their spinoffs since 2008, I will admit it is hard to welcome the new girl. We have tried over the years with DC or Miami, which both flopped (don’t get me started, DC was iconic and deserved a second season). These women are hilarious and snarky. They are messy, but also very forgiving. I give The Real Housewives of Potomac five stars, and urge all of you to begin watching ASAP.