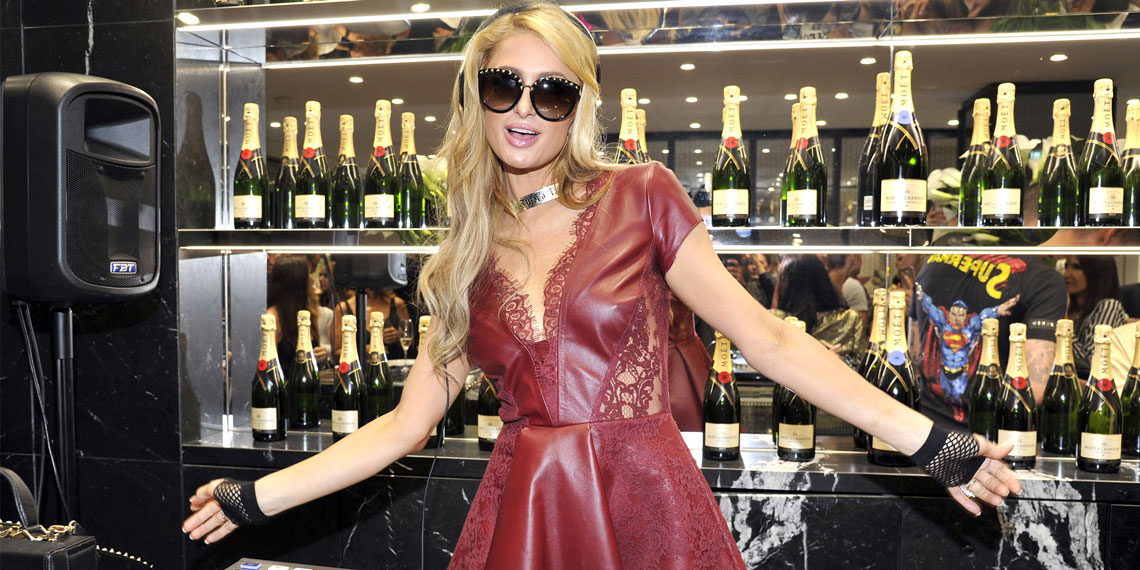 So, Paris Hilton turned 38 on Feb. 17. That might not seem like news, and it shouldn’t be, except that I noticed on Instagram stories that she’s still celebrating with friends literally an entire month later. Naturally. And by “celebrating with friends” I mean I spotted her awkwardly bopping around to music in her nightclub while mouthing “yasssss” in a series of Instagram stories over the weekend. Loves it.

And if you didn’t catch that, I said her nightclub. And I don’t mean it in the way Lindsay Lohan owns a beach club in Mykonos, I mean like, Paris Hilton has her own nightclub in her home. Across the hall from her movie theater. If you pass the bathroom with the diamond encrusted toilet, you’ve gone too far. Yes, if we were reminded of anything from this party, aside from the fact that Paris’s rekindled friendship with Kim Kardashian is still intact (Kim was not only present, but featured in a few of Paris’s Instagrams), it’s that she has a full-blown dance club in her house—complete with a stripper pole and DJ booth.

Love you @KimKardashian ? So much fun celebrating my birthday with you at #ClubParis ✨????✨

Paris shared this photo below swinging from the pole like any 38-year-old millionaire dressed in head-to-toe glitter would, captioning that she’s living her best life. Understatement, but ok. This brings up some larger questions: Is there a dress code involved? What about security? And, most importantly, if you go to the nightclub in your own house, are you technically going out or staying in?

After writing my mother a strongly worded letter about why I should’ve been a trust fund baby, I found myself lost in a rabbit hole of photos of Paris Hilton’s mansion. Not gonna lie, it was a real kick to the ego as I sat on my IKEA couch with a three-day-old red wine stain on it. So I thought it was a good idea for us to look through the pics together, because misery loves company.  Paris Hilton’s mansion is insane, in more ways than one, and I need everybody to know about it.

Let’s start small(ish). Here we have the dog mansion—separate from her actual mansion—that she built for her pets, equipped with heating, air conditioning, and a f*cking chandelier. I also heard there may or may not be a big screen TV that plays The Simple Life season one on repeat for when the dogs get bored or need a little perspective on privilege and the value of a dollar. You’ll notice that the doggie furniture doesn’t have any wine stains on them, and that it’s larger than many Manhattan apartments.

My dogs live in this two-story doggy mansion that has air conditioning, heating, designer furniture, and a chandelier. Loves it pic.twitter.com/4dXAf5XPXV

And here’s a glimpse into Paris’ shoe closet, aka Kim Kardashian’s former place of employment!

TBH, when I imagined what Paris Hilton’s closet looked like prior to this extensive research, this is spot-on to what I was thinking it would be. Paris is the modern day Cher Horowitz. Kylie Jenner’s closet full of handbags doesn’t even compare to Paris’s floor-to-ceiling, color-coordinated shoe closet. No wonder Kim’s entire job was just to organize it.

Speaking of Kylie Jenner, it’s easy to make comparisons between the youngest Kar-Jenner sister’s mansion and Paris’s. And, truthfully, I believe Paris Hilton deserves her own spread in Architectural Digest. While Kylie has framed photos of Marilyn Monroe, Barbie, and Trojan condoms adorning her walls, Paris takes her decor one step further. Where Kylie’s wall art serves as a testament to her own lack of personality, Paris’s is a case study in narcissism. For instance, there’s this giant self-portrait that’s made up of smaller photos of herself just casually chilling in her home. I’ve got to commend Paris on this—if you’re going to be conceited, at least be creative about it.

I have a giant portrait of myself in my house made up of tiny pics of me. Lol pic.twitter.com/hmH4xql9rt

But the literal shrine to Paris’s own self-involvement doesn’t end there. In another room, Paris has framed her magazine covers. Now, normally this is where I’d poke fun at the fact that one of the covers is from literally 2005, which feels like another century, but it’s not like I’ve ever graced the cover of Playboy, so who am I to judge? If I was on the cover of every magazine from Marie Claire to Vogue, I would not only frame that sh*t up in my apartment, I’d also carry around wallet-size photos to hand out to everyone I met like business cards.

I’m so excited to judge the @YaDoggie #Halloween Costume Contest! My babies have been loving their @YaDoggie food! Get your pup in a Halloween costume & submit to win 1 Year of free dog food! I’ll pick from the top vote-getters! Enter with link in the @YaDoggie bio or at yadoggie.com/costume. Good luck! ??? (Link in bio??)

And finally, we have yet another room that screams, “I’m really f*cking rich!” (And obsessed with myself—check out that painting in the back.) I can only assume this is the kind of room that no one is actually allowed to enter, it just serves as a museum of money.

So proud & honored to have won the #FragranceOfTheYearAward for my @GoldRushFragrance tonight at the #HollywoodBeautyAwards. ✨???✨ Thank you to all my fans for your love & support?

And there you have it, friends. Paris Hilton’s mansion. Do you feel poor yet? Great, same. While the jury is still out on if Paris has any other decor other than her own face (where are her mirrors? Does she have framed pictures of literally any other human?), you have to admit her home is pretty f*cking amazing. And I actually think Paris Hilton’s mansion gives us some great insight into her (very much existent) personality. Namely, I don’t think Paris Hilton takes herself all that seriously. Like, yeah, she has framed pictures of herself everywhere, but judging by the flippant way she talks about those pictures, I feel like it’s more because she thinks it’s funny than a compulsion to look at herself. Similarly, the way she uses her own catchphrase when sharing pictures of her dog mansion tells me that she built her dogs a palace not because she thinks her dogs need it, but because she can. Paris Hilton’s mansion is the definition of excess for excess’ sake. It’s fun. It’s ridiculous. But when you have that much money, why not?