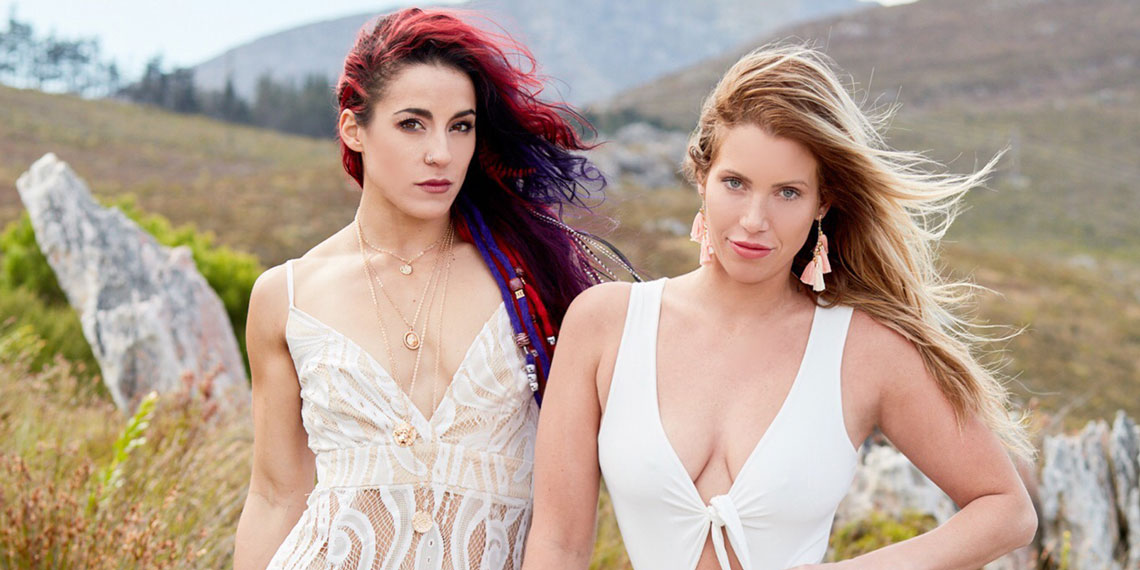 Marie From ‘The Challenge’ Has Some Choice Words For Cara Maria

Guys. I know I piss most of you off (hi, enemies in the comment section! I see you and I cry about you!) on a regular basis, but I never expected to be the subject of a Twitter rampage. When we posted my interview with Cara Maria ahead of The Challenge: Final Reckoning premiere two weeks ago, her partner Marie had A LOT to say about it.

So I summoned up all my courage, prayed that there was no way to be murdered through the phone, and called up Marie for her side of the story. And you know what I learned? This girl is brutally honest, not afraid to laugh at herself, and definitely someone I would want to steal an entire box of pizza with. Or two boxes of pizza, whatever, I’m hungry! Check out her version of events here, and be sure to tune in to The Challenge: Final Reckoning tonight 9/8c on MTV.

Why don’t we just dive right in—you obviously weren’t too happy with what Cara said about you in our interview. So I just wanted to hear your side of the story. I know you mentioned a little of it in on Twitter.
Oh god, you guys actually saw that? Okay. I’m so extra. So basically I was reading through and I was like, “This mofo.” So here’s the thing about Cara. She’s somebody that, listen, don’t take this the wrong way, she has definitely grown up and glown up through her Challenge years. But when she started, she was no champion right off the bat. She had all these different issues to deal with and she was kind of the underdog. And I think that a lot of the cast, including myself obviously, get really upset when she tries to say that we’re using her to get attention or storylines and all of that bullsh*t.

So when I was reading it and I saw that you guys mentioned “oh she’s such a betch” and I was like, “this betch isn’t a betch.” You know? Betches are, we’re like brutally honest, self-aware. Yeah I smoke a lot of cigarettes and drink a lot of alcohol, I don’t go to the gym, you know? But with Cara, she’s not self-aware. She doesn’t realize that her reactions to other people are taken the wrong way. When I tweet or when I troll anybody in life, I’m doing it honestly. It’s not like I’m thinking “this is gonna get me on a season with Cara as my partner.” That’s never my thought. So I was just so bothered by that. And I was just like, “that’s so annoying and so typical Cara.”

She did mention that you were campaigning to get her as your partner on Twitter. What did she mean? Was that true?
I assume that she means campaigning by like, tweeting at her. It’s not like I made signs or anything. Listen. All this craziness started over something really, really stupid. But I’m petty, like most people, and it’s annoying. Here’s how it all started. We went on a season together, had no issues, thought we were totally fine. I get back from the season, everything’s going fine, and the fans are really the ones that antagonize a lot of these situations. They’ll be like “oh she said this,” or “she said that,” and you’re not really looking for it but then when it’s in your inbox, like alright, what now bitch?

So a fan had tweeted out “Why is Marie even invited to these things she should never come back” and she liked it. It was just so passive-aggressive and so typical Cara that I was like, “are you kidding me I didn’t even know we had problems.” And from there it just really escalated. But then she goes on to say all this other stuff, like on Vendettas her name kept coming out of my mouth. But, Cara, you’ve been doing these for how many seasons now? You should know that when we’re sitting down and being interviewed they’re building stories. So if they’re asking me about Cara, I’m answering about Cara. Like, by all means, I would love to talk about something else! But it’s what I’m being asked!

I was a big fan of the pizza incident last season, so I can’t hate on that.
I didn’t even steal the pizza box! That’s the issue. I literally put it aside for my roommates like a normal girl would, because the guys were all scarfing it down. And I come back and Brad goes crazy Brad—I think he ate too much protein that day, I don’t know—but he’s freaking out. And I’m like okay and I actually ended up bringing the whole pizza box back to the kitchen because it’s so weird that he’s freaking out about this and the whole thing escalated. And then I’m someone that likes to poke at people until they kind of break. So if you’re flipping out over a pizza box, that’s kind of hilarious, are you kidding? So that’s when I decided to bring the pizza down and throw it on him. But it was all with good intention (laughs).

I don’t blame you. I didn’t mean to get you off track, though.
Yeah, and then I get trapped in the basket the next episode but there’s a whole other story behind that that they didn’t show. Because, listen. At the end of the day, I really did not like Cara. And I know that when she gets to a final she’s probably gonna win that final. So if it’s a competition of me and Kailah going home, Kailah who is a very strong player, and me, I have my days sometimes. Ya know, I’m not gonna be able to beat Cara in a final. And when I’m very very close with someone like I was Kailah, it was kind of like, “look if I’m gonna send you home today I’m just going to be next anyway. And I’d rather give you this opportunity to really lock this down and shut her up for once.” Unfortunately it didn’t work, but that’s where we are.

Cara did say some nice things about you in our interview. She said you’re the team to watch and that things change a little bit over the season. Do you agree with that?
100%. But it’s gonna take a while. A lot of the teams there, it’s kind of like those fake rivalries. Like, “oh he threw me in.” That’s not a rivalry. Me and Cara genuinely didn’t like each other. And it takes a lot of different situations to occur for us to actually start talking, but I mean eventually we sort of get there. If we stay there, I don’t really know…

Were you worried throughout the game about Cara’s preoccupation with Kyle?
Yeah, 100%. And I told her with the Paulie situation that was not gonna be a good look for her in the house and outside of the house. But with the Kyle situation—I mean, right away she tells Brad she wants Kyle out of the house. That’s Brad’s partner, probably not the best game play. Kyle’s getting annoyed now. And then there’s the Faith situation happening. So on top of everyone else not liking Cara in the house, now all of the people that might have been able to like Cara don’t like Cara. So of all seasons for me to be paired with this monster competitor, like are you kidding me? I’m like, “everybody hates you!” This whole season is me trying to keep Cara cool. And also myself cool. Because, like, the second I get a little bit saucy I’m known to kinda ruin everything, for lack of a better word. So it was  a mixture of keeping her cool and me also cool. Which was extremely hard.

Is there any other gossip from this season you can spill to us? Is there anything that happens that we might not see on the show?
Oof. Well maybe we can do this again at the end, because I’m not sure how much I can give. But I will say lots of fans and stuff have been tweeting that they’re upset that there hasn’t been an elimination episode, and they have to understand that once we learn the format and all that other stuff, there’s so much relationships involved. Relationships are huge in this challenge. With the format, with the voting. The first two episodes, I honestly thought they were hilarious. It’s just building up. Because the stuff that happens this season you can’t even write. I swear I really do believe it will be the best season ever. It will just take a second to warm up, because everyone has to understand these situations that are happening, but it’s gonna blow up.

So you think once the season’s over there’s going to be more stuff that happened they’re not gonna show?
Oh, 100%. There’s so much stuff that happened day one that they didn’t even show. Like, unless they want to make this season go on for the next year and a half you’re definitely not going to see everything.

Is there anything else you want us to know? Now’s your chance to talk off Twitter!
Okay, let’s see. First and foremost, I’m not as bad as everyone thinks. If they actually watch the show, I do fare well in competitions. I just have a big mouth. You know how you always have that leader that like pushes people to do stuff? I’m that person and I’ve been that person behind the scenes and they haven’t shown it. And I think this time with Cara as my partner everyone will be able to see a little bit more how I’m, for lack of a better word, a puppeteer for the drama.

Yeah I mean, I don’t suck. Listen. I can’t run for seven miles straight, I’m not there yet. But I’m a cute girl. And look people say the camera adds 10 pounds. I’m gonna say I hope it adds 35 because if I look like that in person I’m gonna be so upset.

But your Instagram does look good.
Well, there’s FaceTune (laughs). But yeah I mean there’s so many people that meet me that are like, “you’re actually pretty in person.” I’m like, “wonderful.” When people give you those actually comments I’m like, interesting.

And that’s all folks! You can catch more of the drama on tonight’s episode of The Challenge: Final/Reckoning on Tuesdays at 9pm/8c only on MTV.