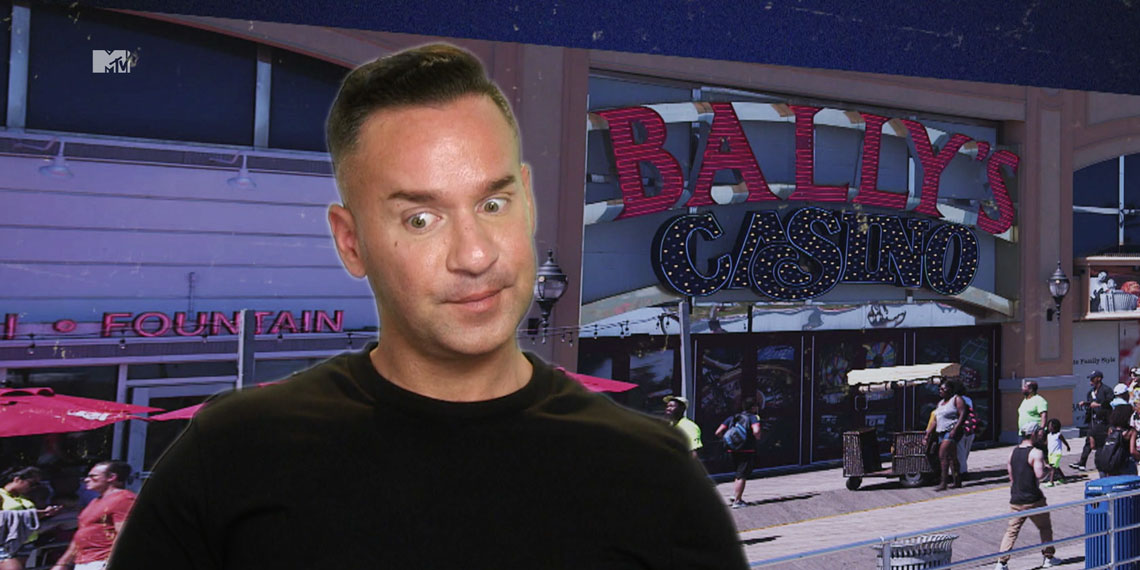 Sooo we left off Jersey Shore Family Vacation with Jen joining them all to murder hang out with Ron. I mean, her attempt to kill him with her car failed so now she’s gonna hang out with his friends. Totes normal. Angelina is busy pretending she likes the Thumb Thumb she’s with. Vinny keeps saying he really likes Angelina’s fiancé. Sure dude. Keep your friends close and your enemies closer.

They decide to all split up, the guys having their own day and the girls having their own day. Ronnie, of course, is talking about himself and his baby, giving v thoughtful parenting advice to the other guys—who did not ask—such as, “don’t drop it.” God help that poor child.

Pauly is talking about his show that night and Mike and Vinny both specifically request shout-outs, which is kind of weird and sad. Vinny apparently just low-key “wants people to know he’s there”. K.

Back at the girls’ table, Generic Blonde Lauren is expressing how disappointed she is that they can’t get married in Italy because Mike can’t leave the country.

Jenni: Do you think he’s going to prison?
GBL: I mean like, you can’t worry about it.
Jenni: Soooo… yes?

I can’t feel bad for her. Like, it’s part of what you sign up for when you marry a felon.

At the boys’ table, Vinny asks Thumb Thumb why he likes Angelina. Idk Vinny, why do you like Angelina? I feel like he’s asking because he’s trying to seem like he doesn’t like her and it’s just making it more obvious.

The girls are talking about how this is Angelina’s third engagement. Three men have attempted to spend their lives with Angelina, she who sh*ts her pants and shows everyone her soiled panties on national television. But I’m single. Okay. Angelina is crying at the table because she has daddy issues.

Angelina: My dad was in and out of prison and only had me to get less prison time.
GBL: Nooo, I’m sure he loves you.
Ang: No, he told me that.

Meanwhile, Vinny is again bringing up Angelina to Thumb Thumb and asking again why he likes her. Vinny then proceeds to try to convince Thumb Thumb not to get married. Why do you care, Vin? Let it go.

Both groups are talking about Ron and psycho Jen. The girls are like, “their relationship isn’t healed from The Incident” (Cargate 2018). Jenni’s like, “yeah he’s not even physically healed from it.” I’m not even a therapist and I can tell you that if your significant other drags you with their car, your relationship probably isn’t doing well.

BTW, does anyone else think it’s super weird that Roger has not been discussed at all? I’m pretty sure this was filmed before Jenni announced her divorce, but like, everyone else has their partner and no one has even asked about Roger. It’s like Jenni told them not to discuss any of it on camera.

They’re getting ready for the show and Pauly is wearing the most hideous bedazzled shirt of Jesus. Why is bedazzled Jesus even an option? Ronnie goes to get Jen so everyone talks sh*t on him when he leaves. Jenni is basically like, “he’s desperate and sad and never will leave anyone.” Sammi left him after he kept cheating and Jen will have to do the same.

Ronnie: I wish they would see Jen the way I see Jen.

Like… from the ground as she’s dragging you with a car, or..?

Pauly wants someone to confront Jen but he also doesn’t want it to be him. They’re all so awkward.

Jenni: I don’t know what to do with my hands.

I say punch her in the face, but whatever. Wait, is Snooki not here? I don’t even remember what happened to her??? Like, she is just missing? Is this something that was previously explained that I forgot? She can’t just leave Jersey Shore.

Jen arrives and literally everyone is staring at her and not talking.

Vinny: I’m not gonna say anything to Jen because I don’t want Jen to kill me.

Now they’re all complimenting her mugshot. I mean I think she looks possessed by Satan, but okay.

Ronnie: She loves me and respects me.

Ronnie, I urge you to check out loveisrespect.org and then GET OUT.

Because Vinny is now obsessed with Angelina, he looks up how far his childhood home is to Angelina’s at the dinner table. It’s 1.3 miles apart. Vinny is a liar. Angelina also says he hung out with her and her friends in high school, which he denies until she starts listing their names. Pauly is in his other ear listing random Italian sounding names just to mix it up.

What feels like five years later, Vinny is still talking about Angelina. Now he’s saying that she really wants to bang him. It’s so weird because she hasn’t talked to him or about him at all, he’s literally the only one pressing it at this point.

Some random bald man who works for the hotel comes into their room. And it’s actually super rude, he knocks for a second and then just opens their door and comes in. You can’t do that, sir. It makes this all seem preplanned. He wants a word with Ronnie and Jen. What could they possibly have done now?

Ron then lies to the group and says Jen forgot her ID and that was the reason for the hotel rep’s appearance. The rep didn’t kick her out—big mistake, huge—and gave them another chance.

Pauly does a VIP meet-and-greet before his event, and I cannot believe people pay for this. And they look so excited to meet him. The show starts and his creepy stalker Vanessa is in the crowd. If a guy calls you a stalker—multiple times no less—on TV, he’s just not that into you, Vanessa.

Vinny: I think likes it. I think they want to take me home. I wouldn’t do that, though.

Then he giggles. I’ve never been more convinced that he would 100% do that.

Vinny: And just like clockwork, Ron and Sam. I was about to say Sam. Jen. Are fighting.

Seriously, Ron should be forbidden to date. Ladies, stop dating him, please, God.

Mike: How are they arguing right now? It’s kind of like the Big Bang. Do you know how it started? No.

Mike, the scientist at work.

Ron to Jen: You’re yelling and fighting for no reason.
Jen: Take me home.
Ron: No.

I don’t know what that means??? Jen storms out. Pauly sees Ronnie chasing Jen out and announces to everyone, “Is Ronnie spiraling?” That’s amazing.

Jen to Ronnie: You’re on your own, bitch.

They seem so in love. Mike then rushes up to Pauly—while he is DJing, aka working because this is his job—and tells him the drama. Pauly then says to the entire crowd, “Shout-out to Single Ronnie in the building!”

I’m sure Jen will appreciate that. Now Ron is pouting in the corner.

Mike: Jen made the whole night about her and not the birthday celebrations. Her new nickname is The Inconsideration.

Vin and Pauly meet girls and bring them back. I wonder how Angelina will feel about this. A girl wheels in a dozen pizzas for them. Pauly brings pizza to Mike when he’s in bed with GBL, and GBL straight-up tells him no. But he leaves anyway to be with his true love, Pizza. Even Vinny cheats on keto and has a slice. Then these drunken assholes drop two pizzas facedown on the floor. That is straight-up blasphemous.

Pauly leaves to go to his next gig and it’s like, 4am. Vinny is left with two girls and he’s pouting because “it’s not fun” without Pauly. Ok…? Seems more like he just wants to be with Angelina.

Ronnie is complaining to Vinny about Jen, saying things about her bad attitude. I mean you didn’t dump her for hitting you with a car, so I don’t see how the attitude problem is relevant. I can feel Vinny’s annoyance with him. At this point I think Jen could stab Ron in the face and he’d still rather be with her than be alone.