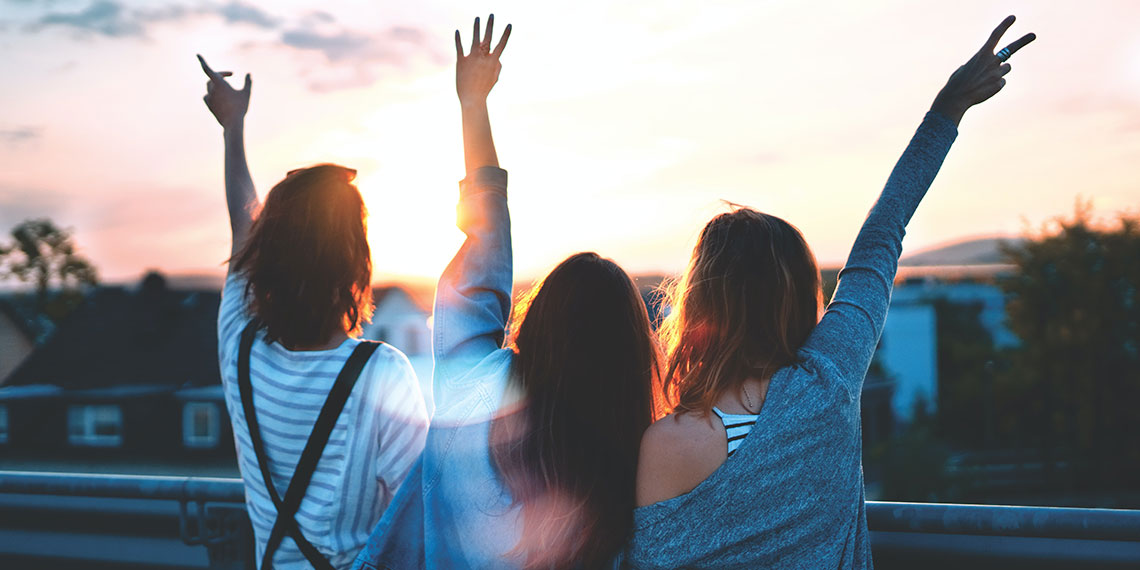 We’re more than a couple weeks in now.

The allure of eating Cheetos and Pop-Tarts has worn off.

Your cat officially hates you.

Going to the grocery store feels like something out of The Walking Dead.

And you’re worried. About how hard it is for your family to co-exist when you’re crammed in the house together and no one can leave. Or how you lost your job but the bills just keep coming. Or because someone you love is an essential worker and you’re scared they might get COVID-19. Or someone you love already has.

I’ve been thinking about that worry a lot. Especially on the days when it rains and not being able to go outside nearly makes me have an existential crisis, or the days when I miss my mom’s hugs with a longing that feels bone deep. And I’ve been thinking about what gets me through it. And this is going to sound like something about of My Little Pony, but honestly, it’s female friendship.

I guess it’s not that surprising—my girlfriends are what’s gotten me through just about every hard thing ever. But something about our friendship has shifted. I can’t say exactly when it changed, but since this pandemic started, we’re talking about the hard things and the important things all the time now, openly and bravely and more. So much more.

I’ve always been fascinated with female friendship, and wondered what it is that makes it feel so extraordinary.

Is it because the experience of being marginalized as women causes us to band together more tightly? There’s a young adult novel I love, Done Dirt Cheap by Sarah Lemon, that says, “We’re friends because when girls—women—are alone in this world, they’re easier to pick off.” And maybe that’s it. Maybe we need each other to survive, and so we wrap ourselves around each other like armor.

I was talking with my friend, Mayra Cuevas, about a children’s book author group she’s in called Las Musas. She calls it her “Latina tribe—a group of amazing women, who understood the magic of abuelitas, the absolute bliss of a guava pastry and the pain of a chancletazo.” At a retreat a few weeks before the pandemic, she told me the group “shared our fears, cried through grief, and laughed at the absurdities of life. We even burned away our self-doubt in the most amazing fire ceremony, while praying for our collective hopes and wishes. It was pure magic. Enveloped in the arms of this sisterhood, I felt seen, accepted, and appreciated. Their love and compassion gave me courage and strength. This is the function of female friends.”

Is it that men simply don’t form these types of friendships as often or as easily? I’ve read that men report spending less time with their friends and that they don’t consider their friendships to be as important as women do. That women are more likely to treat their friends like sisters.

I worry about my husband during this time. (Possibly because of that seminar I attended in grad school where I learned that women are more likely to report feelings of stress and depression after trauma, but men just die earlier. Burying your feelings: it’s even more dangerous than we thought.) It seems like it’s so much harder for guys to make friends after college. He has these amazing friends from high school, and they nerd out playing Magic and video games whenever they come to town. But does he have people that he’s leaning on emotionally?

It seems like it’s harder for him, and for men, to make new friends. And full disclosure, I’m super shy, so I almost swallow my tongue every time I meet someone for the first time.

Maybe it’s that initial awkward bubble, the space between politely knowing someone and telling them terrifying truths like I’m scared I’ll never figure out what to do with my life or  I’m worried I can’t be the kind of mom my kid needs or I have a crush on this guy in accounting even though he wears jorts. Maybe it’s harder for men to break through the bubble than women. And make no mistake—it’s hard. If we’re thinking about undervalued strengths that women have, the extreme bravery it takes to form a new friendship goes at the top of my list.

But could there be something about women’s neurobiology that makes us friend differently? Okay, this is an extremely complicated topic to talk about because people have tried to weaponize the idea of brain differences against women and other marginalized groups for years. But there is a ton of cool brain science behind friendship, and I got to talk all about it with Dr. Sara Freeman, a neuroscientist who studies social behavior, and with whom I once made a friendship pact in a bathroom during our grad school interview.

It turns out the same systems in the brain that are involved in pair bonding (or falling in love) are also involved in female social behavior (friendship!!). The hormone oxytocin drives all kinds of social bonding—love, friendship, familial—across a bunch of different species. We talked a lot about one particular scientist, Dr. Annaliese Beery, and her work on oxytocin in voles. There are a lot of animals that mate for life (swans, termites, fennec foxes), but meadow voles are not about that life. They’re so promiscuous they don’t even form a male-female bond for a single mating season. But you know what they do form? Female friendship!!! (Well, the vole equivalent of a female friendship.) These furry little rodents aren’t thought of as being the most social creatures, but they actually make really critical social bonds that help them survive the winter by huddling together for warmth. (Adorable.) I think huddling together for survival is exactly what we’re doing when we send takeout to a friend who’s having a hard week or share a roll of toilet paper with a neighbor.

Another cool thing about the science of friendship? Our brains are similar to our friends’ brains. When scientists had college students watch short videos while scanning their brains, they found that people who are friends had startingly similar neural responses, showing reward, boredom, and attention at the same parts. It could be the scientific reason behind why sometimes you meet someone and just click.

Regardless of why women are friends, I’m convinced it’s critical. Every time a friend tells me, “It’s okay that you’re not okay right now. I am not okay either. But we’re not okay together,” it feels like they’re giving me life.

Having a group during trauma makes you more resilient. A lab at Instituto Universitário in Portugal did this research with zebrafish where they exposed single fish or fish in groups to a chemical stressor, and the fish had a lower fear response if they endured the stressor together. It didn’t even matter if a fish was in the same tank as the others. As long as it could see the other fish through the glass, know that they were in the tank next to it, the fish wasn’t as scared. This gives me hope that all the FaceTime and Zoom meetings are working. (Hell, even TikTok.)

This phenomenon of feeling reduced fear when you’re in a group is called social buffering. And just because we’re social distancing doesn’t mean we have to stop social buffering. I believe it makes a big difference, whether we’re talking about people and COVID-19 or zebrafish and chemical stressors. For now, my connections with my friends are keeping me sane.

Sometimes it’s opening a book I set down a couple months ago and having the most perfect Galentine’s Day card fall out and bursting into happy tears.

Sometimes it’s group texting with my neighborhood moms about how exhausted we are while plotting a socially distanced happy hour in a nearby field that will totally make us look like a coven of witches.

Sometimes it’s a Marco Polo from a friend talking about the importance of perspective as she shows me her chin from different angles.

Sometimes it’s my friend Terra Elan McVoy telling me about how she was watching bees that day and thinking about how “the bees didn’t all freak out when they started dying from Round Up, they just kept being bees. And that’s kind of what we’ve got to do is keep being bees. Make macaroni n’ cheese. Play music. Cry. Freak out. Get some sleep. But keep being bees together for as long as we can.”

And sometimes it’s live posting with my besties while swilling wine and watching Love Is Blind together because WE ARE CLASSY PEOPLE, OKAY?

So, play Jackbox or leave silly Marco Polo messages while wearing old Halloween costumes or reach out to a friend you haven’t talked to in a long time and tell them you’re thinking of them. Because I really do think things like that, and like friendship, are going to save us all. I think it’s what will keep hearts and minds and humanity intact for when we come out the other side of this.

I dream of the day when I can hug my friends again and go on girls’ trips and sit on a patio sipping margaritas. I hate that all of those things have been taken away. But the part about how we’re talking about the important things so much more because this pandemic is forcing us to? As much as I can’t wait for the day when we don’t need to shelter in place, that closeness feels really special. I don’t want to lose it. When this is all over, I’m going to figure out how to keep it.

Rachael Allen is the winner of the 2019 Georgia YA Author of the Year Award, whose books include 17 First Kisses, The Revenge Playbook, and A Taxonomy of Love, which was a Junior Library Guild selection, a 2018 Book All Young Georgians Should Read. Her most recent book is The Summer of Impossibilities. She lives in Atlanta with her family. Visit Rachael at rachaelallenwrites.blogspot.com.