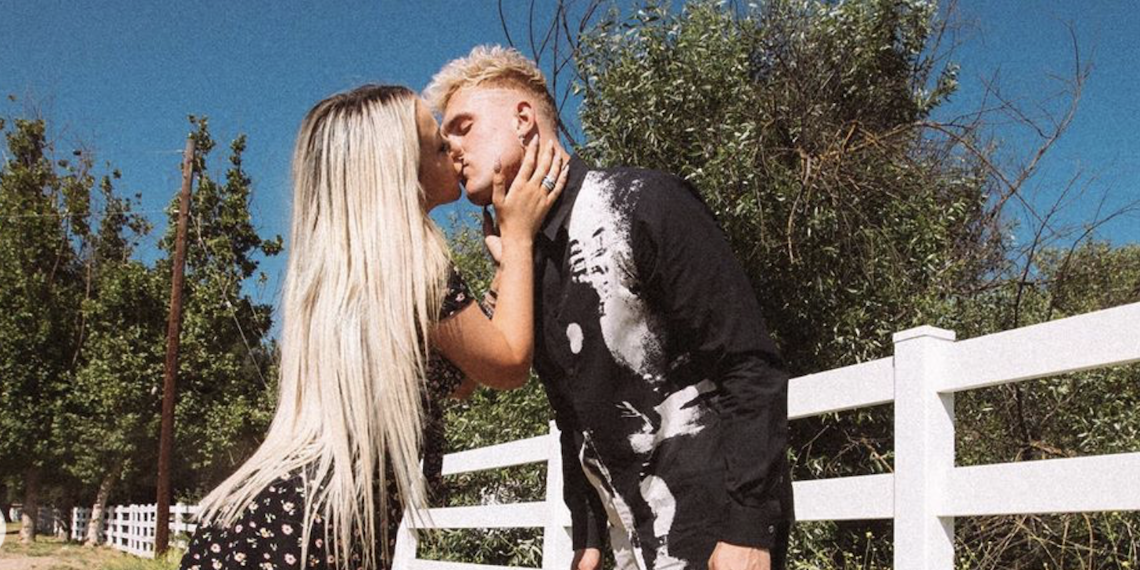 A couple weeks ago, news of Jake Paul and Tana Mongeau’s engagement ripped through the internet like the world’s thirstiest tornado. Of course, it had to happen on the one week of the year I’ve been out of the office, so I wasn’t around to report on the initial fallout, but luckily this sh*tshow is still going strong. Even though we all still have our doubts that this relationship is truly legit, these two are in it for the long haul (or at least the long con).

Jake Paul and Tana Mongeau wasted no time creating content to cash in on their relationship, including a whole set of JANA merch. Yes, that was the sound of me screaming into the void. It’s fine, I’m fine. Yesterday, Jake and Tana took another step toward proving their relationship is legit, in the form of a classic engagement photo shoot. Even though it’s physically impossible for me to not roll my eyes at everything they do, I can’t really be mad at this. Basically everyone does engagement photos, so it was a natural next step for these two pinnacles of thirst.

Here’s Jake Paul’s post with a bunch of the photos.

The photos are pretty tasteful in general, at least as much as we can expect from someone who did a naked photoshoot for her 21st birthday last month. Jake’s dog Thor is very cute, but I’m curious why his other dog, Moo, wasn’t included in the photos. Maybe he was at the groomer’s that day, or maybe he doesn’t think this relationship is real either.

bet you didn’t think we’d be engaged for this long… #ThePauls ?

Okay, I do have to say that those rings are beautiful. There have been rumors that Tana’s engagement ring might not be a real diamond, but I’m not going to pretend to be a gem expert. But the rings in this photo also got people talking about whether or not Jake Paul and Tana Mongeau might already be married. I need to sit down for a second, these two are giving me whiplash again.

Between the ring situation and Jake’s location tag of “MarriageToday,” people quickly began to wonder if there was a surprise wedding happening. Of course, I don’t know anything for sure, but I’m fairly confident that this isn’t a thing, mainly because both of their captions directly refer to their engagement. These idiots might not have the best judgment, but I’m hoping that they’re at least smart enough not to get married only a couple months into their relationship. Even as I was typing that sentence, I realized that I might be giving them too much credit.

Whatever, I’m standing my by gut instinct, I don’t think they’re married.

Jake Paul and Tana Mongeau are all about love and light these days, but the news of their engagement was emotional for Bella Thorne, who dated Tana until earlier this year. On the day the news broke, she posted these selfies to her finsta.

In a subsequent post for Tana’s birthday, Bella seemed very supportive, but it’s still been a tough couple months for her, with the drama surrounding her breakup with Mod Sun, and the scandal that ended with her leaking her own nudes and feuding with Whoopi Goldberg.

Through thick and thin?? I love you tana happy bday you beautiful beautiful special girl

Tana commented “i love u forever and ever” on this photo, so it seems like everything is good between the two of them. As crazy as Tana is, it makes me happy that their friendship is intact after everything they’ve been through together.

So for now, I feel fairly confident that Jake Paul and Tana Mongeau aren’t married, but literally anything could happen with these two. We’ll be patiently waiting for the next updates about their relationship, but knowing them, we probably won’t have to actually be that patient.