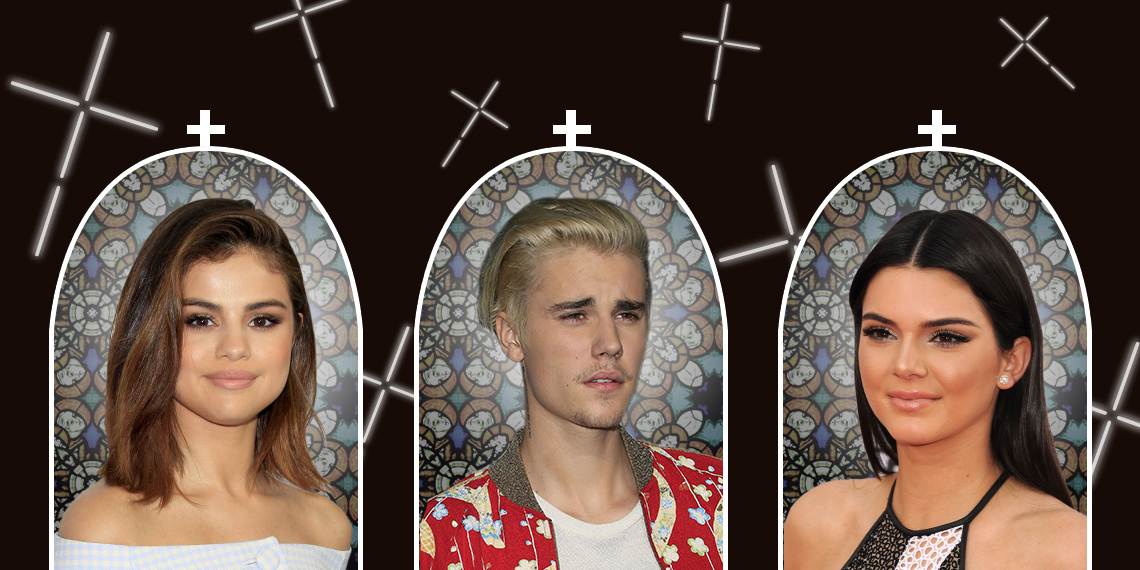 Why Do So Many Celebrities Go To Hillsong Church?

Are you obsessed with cults, conspiracies, and true crime? You’re in luck—we’re launching a new podcast on all that sh*t starting October 1. It’s called Not Another True Crime podcast and it’s going to be dope. Follow @natcpod on Instagram and Twitter for more details.

I believe Tina Fey said it best when she said, “Hollywood is like a high school cafeteria. You have your Varsity Jocks, Girls Who Eat Their Feelings, Girls Who Don’t Eat Anything, Desperate Wannabes, Burnouts, and of course, your Jesus Freaks.” And as it turns out, there are quite a lot of Jesus Freaks. I personally have no problem with religion or religious celebrities, but being the sweet, stupid souls they are, some tend to get themselves involved in cults like Scientology suspicious organizations. Call me skeptical, alright?

So a few weeks ago when I was bumming myself out over the fact that Chris Pratt has a new girlfriend that isn’t me and doing a deep dive into their dates for material to complain to my therapist about, I noticed that he and Katherine Schwarzenegger attended church together. And yes, it is the same church that Justin took Selena to during their brief reconciliation this year. So like, is this a thing now? Are the pews lined with cocaine and Playboy models? Because I’m pretty sure that’s the only way they’d get celebs to attend.

As I began my Insta stalking research, I learned this organization is called Hillsong Church, and is a favorite of the Biebs, the KarJenners, and Nick Jonas. So what is it, exactly? And why are celebrities taking dates there instead of to like, Tao, or in Ben Affleck’s case, Jack-in-the-Box? Well today’s your lucky day, friends, because I’m about to give you the deets on this church that is most definitely, for sure, totally not a cult.

Is your church even cool if everyone doesn’t want to bang the pastor? Thankfully, Hillsong doesn’t have to answer that question because their pastor is hotter than any dude currently competing on Bachelor in Paradise (except Joe, duh). His name is Carl Lentz, and he co-founded the New York City branch of Hillsong in 2010. Let’s take a gander at that face that was perfectly crafted in God’s image. Like, perfectly. God chiseled that jawline Himself.

SO @avaangellentz turns 14 today.. I love being her daddy. TIME. FLIES!! I used to say the typical young dad things we all tend to say about our daughters.. “I’m gonna keep her in the house” “get out the shot guns” “she will never date…” and I get all those sentiments, truly…but then, you begin to see a woman of God develop and mature and you realize that she’s a LEADER. She can and will make her own good decisions. She’s strong and capable and classy and wise.. When she does date? The guy will be a legend, cause she knows what she is worth. When she does leave my house? She will be ready. Because she’s smart and focused. Thankfully both those scenarios are NOT TODAY. TODAY, its just her birthday!! And that’s about all I can cope with, anyway.. AVA BOO!! Your future is so bright. Your RIGHT NOW, though? Spectacular. I love you. I’m proud of you. Thanks for giving me grace, as Im learning every day how to be a better father..you are more complex than you think! But I love every second of trying to figure you out.. enjoy this day, girl!! Let me know when you want me to come hang with your friends and teach everybody what cool is, etc. #occupy14withdadplease #textmebackquicker #callmemore #iwillbuyyourloveanytime

I bet he doesn’t even need those hipster glasses to see. Show me your prescription, Carl. PROVE IT!

TODAY IS THE DAY! OWN THE MOMENT IS AVAILABLE EVERYWHERE… excited to see this book, help people! I've appreciated the interest and support from so many, including the @nytimes who reviewed the book and gave it an honest look! But no matter what anybody says about it, photo #2?? Made the whole thing worth it.. I had signed a lot of books yesterday, was truly an amazing day, and as I looked up I recognized a little voice and a little face… "dad, will you sign my book?"of course I cried, of course it was awkward but sometimes the best moments in our lives are like that.. who knew the review that matters the most? Belonged to a little guy that lives with me. "I like it dad, I'm gonna bring it to school…" #OWNTHEMOMENT LINK IN BIO!!

Not only is Lentz a regulation hottie, but he is also extremely close with Justin Bieber.  He even baptized Justin in Tyson Chandler’s bathtub, and is his personal pastor. However, it is rumored they’re on the outs right now since Lentz did not publicly congratulate Justin on his fast and not at all rash engagement to the daughter of the Baldwin I’ve dubbed “most likely to be a serial killer”.

It’s In A Cool Venue

Have you ever been sitting in St. Patrick’s Cathedral and thought to yourself, “Man, I really wish this religious service felt more like a concert”? Well then you’re in luck, because if you attend Hillsong Church you get to feel like U2 is saving your soul. Well, your soul and the souls of 2,000 others who think being a born-again virgin means “just the tip.”

I love @hillsongnyc .. when you plant a church or anything for that matter, knowing where you WERE and seeing where you ARE gives you a good indication of where youre gonna BE.. One thing is for sure: we started with faithful, selfless people who committed for the long haul. And to see these people, some you know, some you wont, step into what God has for them is inspiring… I asked my friend Anthony aka @lilcasanova360 to help me pray for people at Barclays center, recently. He said “you know I prefer to be off the stage, but if you need me to, I’ll do it.” He has been greeting ppl as they come in our doors for over 7 years now! He represents the best part of who we are… this past sunday we had a lot of services as always, from Manhattan to Jersey, to Boston, to Connecticut.. at least 20 different people led, preached, ministered… to many. It’s a testament to those who commit to building a cause and a community. So much is possible and I’m grateful that I get to be a part of a church like this! #occupyallstreets #spotlightsorshadows #churchinthewild

The New York services are held in Hammerstein Ballroom, home to legends like David Bowie, Britney Spears, and Patti LaBelle, and now apparently to anyone who is looking to absolved of their sins by a man in skinny jeans.

The Church Is Welcoming To Everyone

Hillsong is a global pentecostal megachurch, which means that they adhere to the word of the Bible. Obviously, since the Bible is a text that was written a while ago, it’s not necessarily in step with the times. Pastor Hottie has publicly stated that the church believes that gay marriage and abortion are both sins. But as he explains in this excellent GQ profile, that doesn’t mean they don’t welcome everyone to their church, no matter what. I assume the “no matter what” part of that statement means “as long as they donate 100 grand and sign an NDA.”

Considering their congregation has a few DUI’s, a sex tape, some out of wedlock pregnancies, and the song “Pizza Girl” amongst them, I’d say it’s a good thing the church is forgiving of sins.

Pastor Hottie, is this allowed?!

It May Be Shady

As you may have guessed, any organization that encourages people to follow the teachings of one charismatic man may not have the purest of intentions. *cough* Charles Manson *cough*. Now I’m not saying that Hillsong Church is going to murder anyone in the Hollywood Hills, but Post Malone is saying that, okay? SUE HIM, YOU HEAR ME!? According to Post Malone, Justin donated $10 million to Hillsong, and he is now “super-religious” and “real culty,” which is what I said about my cousin when she got “John 3:16” tattooed on her lower back. Pastor Hottie disputed those claims from the personal spray tan booth in his gilded bathroom. I’m not sure who to believe, but in the church’s defense, Post is always tired and that’d f*ck up anyone’s ability to form a rational thought.

And that’s the deal with Hillsong Church! I hope all these celebrities really do have their souls saved by a hot pastor in Hammerstein Ballroom, and that the power of Jesus is so strong it cancels out the strategically timed nudes their publicist a hacker released.

Are you obsessed with cults, conspiracies, and true crime? You’re in luck—we’re launching a new podcast on all that sh*t starting October 1. It’s called Not Another True Crime podcast and it’s going to be dope. Follow @natcpod on Instagram and Twitter for more details.