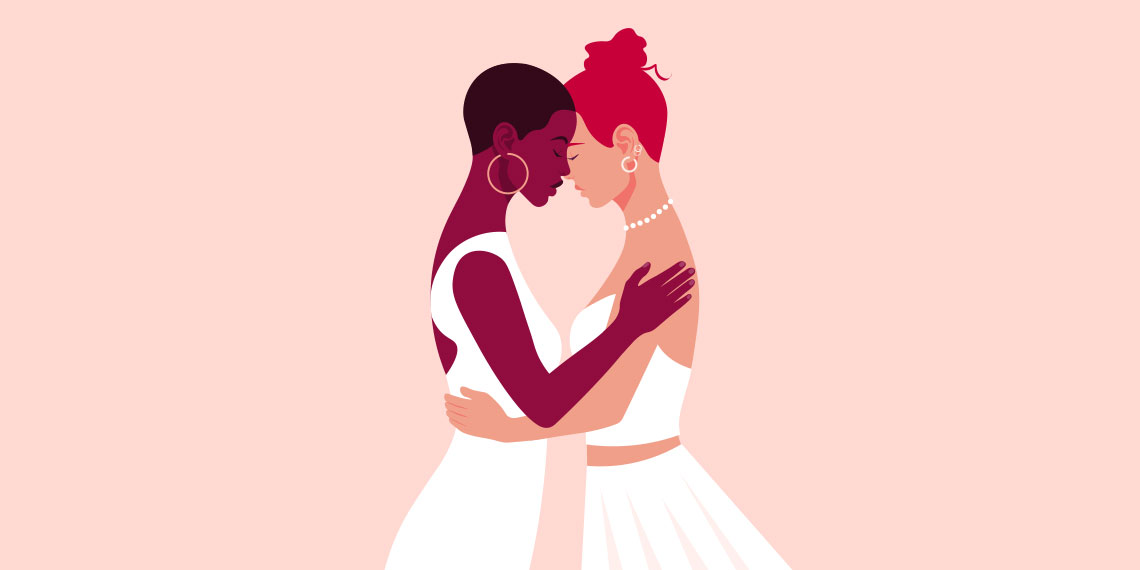 How Weddings Have Changed In The 5 Years Since Marriage Equality

I remember exactly where I was the day that the Supreme Court landmark ruling of Obergefell v. Hodges was decided on June 26th, 2015, marking the beginning of marriage equality in all 50 states. When the decision was announced, I was sitting in the front seat of my car in summertime heat, sweating and teary-eyed, and I watched the news coverage unfold on my phone as I tried to absorb the moment. I knew at that time I wanted to propose to my then-girlfriend, and I also knew that should I do so, we’d be considered lawful spouses in every single state in the nation, not just our own home state of California, where marriage equality was legalized in 2013. So yes, I was elated, but it also felt like the way the normal course of events should be unfolding. It felt like, “duh, finally.” Now, on the five-year anniversary of that landmark decision, ironically, it feels even more precious and relevant to me now than it did when it initially happened.

My wife and I were married in 2018, and while we had the ability to do that legally where we live since 2013, it meant something undeniable that it was legal in all states by the time we said our vows. Getting married as a gay person is notable because it partially makes you feel more normal. You’re engaging in an experience that straight people have been allowed to do freely for like, ever, while simultaneously feeling critically important. It’s not just the biggest day of your life because you’re marrying the person you love; it’s the fact that you have the ability to legally do that at all.

There’s a certain dignity in marriage and in that kind of public commitment you make to someone, and while it shouldn’t have to feel like a privilege, it does. Marriage is the most intimate thing, but it’s also a sort of love that’s meant to be shared and expressed. It gives us a validation that makes us feel closer and more visible to the world around us. For all those reasons, plus the general fact that we, you know, love each other, we wanted our wedding to be a celebration. That seems like a no-brainer, but we wanted it to actually be a main focus of the entire day and featured front and center, so we went through some effort to make that happen. And based on insights from WeddingWire’s Celebrating 5 Years of Nationwide Marriage Equality report, which analyzed data from 2015 to 2019 to understand shifts and trends that have occurred in LGBTQIA+ weddings since the legalization of marriage equality nationally, we aren’t alone in choosing an experience that felt authentic and original.

Our wedding mirrored a lot of the trends that are reflected in the general wedding atmosphere, and we also customized where it was most important to us, like the ceremony. I absolutely did not feel comfortable reading someone else’s words on my wedding day, and I’m not sure if that’s because I’m gay or just because I’m opinionated. Either way, I’m in good company: 70% of LGBTQIA+ couples chose to write their own vows in 2019, as did 44% of all couples. On some level, I think it’s expected to see more customization and creativity in LGBTQIA+ weddings. You’re already doing something unconventional by marrying someone of the same sex, so who really cares if you want to wear a blush suit instead of a white ball gown, right? But there are other ways in which the queer community is also setting trends and paving the way by choosing to incorporate both traditional and custom effects. For instance, LGBTQIA+ couples also have a higher likelihood of having a mixed-gender wedding party—96% did in 2019—another example of ways the community is focused more on who and what matters most to them rather than what’s expected.

Everyone buckle tf up. Wedding photos are IN. Unfollow me now if you hate gay love, excessive joy, or both 💕#bestdayofmydamnlife #gayashell #hopeyouarenttiredofthisweddingyet #loveislove

Based on the WeddingWire report, one of the biggest differences is that LGBTQIA+ couples are way more likely to pay for the majority of wedding expenses themselves (61% to be exact, compared to 47% of straight couples.) Not my experience, but I’m living for that level of independence. It’s something to strive for. Thanks again for paying for my wedding, Mom! Maybe that could have to do with the fact that the average age an LGBTQIA+ couple is when they get married is 36, which gives them more time to get established in a job and bring in some cash.

The LGBTQIA+ community is incorporating traditional elements into the big day as well. After marriage equality was declared nationally, there was a significant jump in the amount of LGBTQIA+ couples who chose to perform a first dance (85% did so in 2019, up from just 42% in 2015), and 69% chose to do a cake cutting in 2019, compared to 49% in 2015. As weddings increased in size and parental involvement, more couples chose to engage in a first look, 69% in 2019 as opposed to 44% in 2015. It makes sense that as more details were incorporated into the big day, couples would still want that time to be alone with their wife or husband-to-be; it was one of my favorite parts of my wedding day and the only part where I cried, and that was largely due to the fact that my wife’s wedding dress had sleeves that I loved but hadn’t known about. After the wedding, 49% of LGBTQIA+ couples are now experiencing one person changing their last name to their spouse’s, which has almost doubled from 25% in 2015. Speaking from experience, that is an act of true love.

All of this is really positive news, but not to be discounted is the fact that roughly three in ten of Americans surveyed still don’t think people like me should be allowed to get married at all. Interesting, isn’t it? By interesting I mean weird, and gross. But that statistic reinforces why we have weddings that celebrate who we are, and why it’s important to commemorate the five-year anniversary of the Obergefell v. Hodges decision. But commemorating and celebrating how far we’ve come doesn’t mean ignoring how far we have still to go. WeddingWire acknowledges in their report that there are regularly stories that continue to appear in the media about couples who were turned away while wedding planning by vendors due to their sexual orientation or gender identity, and I can confirm it does happen.

When I first started looking for vendors for my wedding, I was beyond excited and immediately reached out to my favorite local photographer who’d shot at two weddings I’d been a bridesmaid in that past summer. She responded that she wasn’t comfortable shooting my and my wife’s wedding and suggested we get in touch with someone with a better understanding of same-sex relationships. Like we needed some sort of gay specialist to photograph our wedding since a “regular” one just wouldn’t be quite right. It was uniquely crushing to me because this was a person who knew me. You always tell yourself when you see someone posting hurtful things or saying hateful things that if they knew you, truly knew you, they wouldn’t believe those things. That if they could just see how much my wife loves animals and how much she helps people as a veterinarian, they would change their minds. Or if they saw how I take care of her or how we understand each other. While we did go on to find the most incredible photographer in the world, that event alone shows how far we still have to go before we’re really on equal footing. And this Pride month, with the critically important Black Lives Matter movement currently taking place alongside a month that’s supposed to be celebratory for the queer community, I want to acknowledge the win that was the 2015 Supreme Court marriage equality decision, as well as the long-awaited ruling on protections for gay and transgender people in the workplace handed down just decided this month as well. These are steps we use to pave the way to a future where we can live and love as who we are.

By no means are we finished with that fight. But, five years ago, it became legal in this nation to marry who you love, and that can’t be discounted. It is a decision that changed my life and afforded me the ability to say my vows to my wife in front of our family and friends with the same legal protections and significance as anyone else. It does not change what I feel for my wife, or who we are together, but it provides us with substance and import and rights we wouldn’t otherwise have. Plus, I get to make wife jokes now which, let’s face it, are just funnier than girlfriend jokes. I remember when that wouldn’t have been possible, and even as I see the work which still needs to be done for my community and all the other vulnerable out there, I also see a future built with hope and humor and love, and that’s what I hold on to.