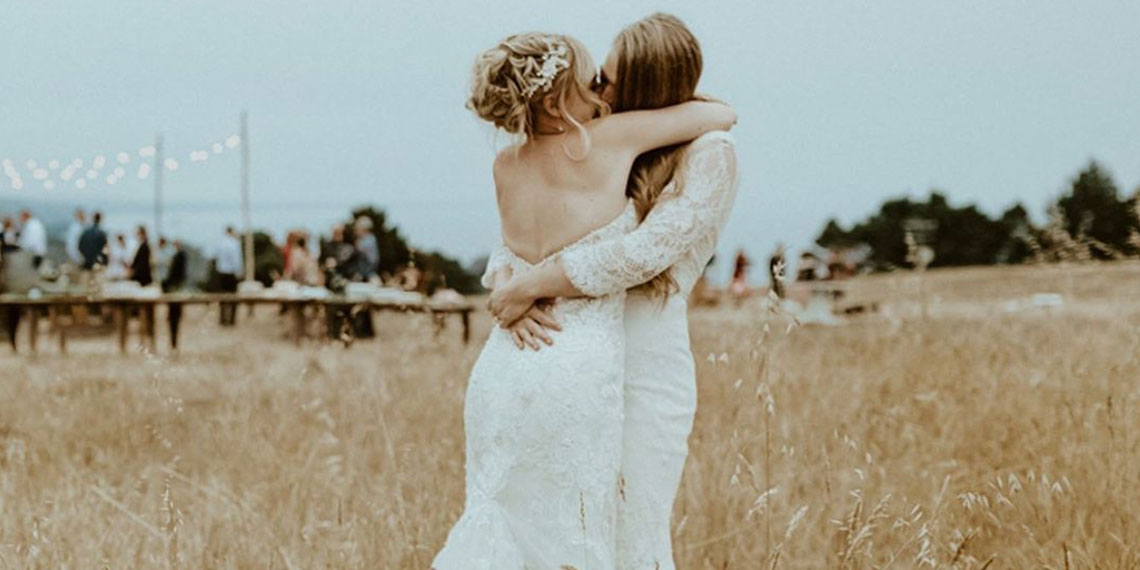 Why I Decided To Take My Wife’s Last Name

No one who knows me would call me a traditional person. At 16, I was a blonde, perky cheerleader obsessed with the color pink, but I was making out with girls at parties and let’s just say, had zero interest in the football players. Nowadays, I find babies annoying and, frankly, weird to look at 99% of the time. The only time you can find me in rubber gloves and an apron is if I’m dressing up as Betty Draper for Halloween. In fact, the most conventional thing I’ve ever done is fall in love with my wife the first moment that I met her like I was in a rom-com, meaning that I would have to call myself a believer in love at first sight—even though that sounds insane and up until that point, you were a lot more likely to find me at a house party talking about how love isn’t real. Somehow, though, it happened, which is how I ended up married at the ripe old age of 26 like a child bride, sending all my “cool unconventional girl” credibility down the drain. (I got a little of it back when I proposed to my wife first after I got tired of waiting for her to ask me, a tip I’d recommend to any girl getting impatient for a ring.) But anyway, all of this is at least partly why most people who know me were surprised to hear that I was planning on changing my last name once we were married. The bigger surprise was that there was someone out there willing to marry me at all, and I know that because that’s what everyone told me.

I didn’t think much about the name change during the wedding planning process, mainly because I was busy crying on the phone to my mom about cupcake flavors and generally losing my mind. I knew it was something that would have to be dealt with, but until I found the perfect veil and made sure my bouquet would lean peony-heavy, I didn’t have the headspace to add it to my to-do list of things to stress about. Once the wedding was over and regular life was setting back in, I started researching what I’d actually have to do to have the same name as my wife. That investigation wasn’t super pleasant.

All the reasons not to change your name are pretty convincing, honestly. It takes a lot of time in both the short- and long-term. In the short-term, you’ve got to carry your marriage certificate everywhere you go while you run around to government offices like Social Security and the DMV, and everyone knows a potential trip to the DMV is reason enough to decide to keep your maiden name forever.

In the long-term, it just takes a while for absolutely everything out there in the world with your name on it to get the memo that it’s changed. You have to re-register to vote and get new credit cards and notify Human Resources at your job. And if you mess it up on a flight reservation, forget it. If anyone out there really doesn’t care that you’re a newlywed, it’s TSA. In short, I understand the real reason divorce is such a big deal now, and it isn’t the emotional devastation at all—it’s the sole idea of having to change your name back again.

Some people asked me why I was the one to take my wife’s name, and that’s a valid question. As two women, the typical gender roles that designate who changes their name didn’t apply to us. It could have gone either way. So, how did we choose? Part of it was that she wanted to keep her maiden name as a doctor. Cool. You’re smart, we get it. And she would’ve changed to mine if I felt strongly about it, and I knew that—so it wasn’t like I felt forced into taking hers. She also works a schedule that isn’t in line with normal working hours (see: doctor), so changing her name would have taken her three times as long and been much harder to accomplish. It just made more basic sense for me to deal with it instead. So, I stepped up to the plate and tackled the process myself, because one way or another I was determined for us to have the same last name. ‘Til death do us part, and all that.

“I could not have dreamed of you.”—my wife, in her vows, as I sobbed incoherently. 🌈 #loveislove #marriagedayone #soulmate

But it wasn’t all based on logistics. The process was emotional to me on another level because of who we are.

As a same-sex couple, it’s uniquely important to us that we’re visible as a family unit to the outside world, and we have to put more effort in to achieve that visibility. We’re 10 times more likely to be mistaken as sisters, friends, or cousins. Part of that isn’t anyone’s fault. We’re both long-haired blondes who just tend to present as stereotypically straight, even though we aren’t. Guys will hit on us and then linger to ask inappropriate questions about our sex life once we tell them we’re married, instead of respectfully leaving the way they (usually) would when a straight girl says she’s married. I, on the other hand, once explained to a man in a bar that I was married to my wife, and he insisted on taking a picture with his arms around us like we were zoo animals. There have been times when men thought I wanted to be chased or that I was playing hard to get somehow by lying about being married to my wife when I was, in fact, just being honest and trying to get myself another drink without my marital status being dissected.

Taking my wife’s last name doesn’t automatically prevent these types of situations from happening. No one is asking for our ID or documents in public, except the bouncer at whatever bar we go to (and sometimes we do forget our rainbow armbands at home). But it still continues to make a difference in every aspect of our lives, because it means something on a deeper level for us.

This National Coming Day post is coming out late, but so did I. I did not come out in a “normal” timeline, as if there is one. I knew what I liked and what I didn’t but at 16/18/20, what does that really mean? It takes time and it takes courage to acknowledge what’s true about yourself and what isn’t, regardless about what the rest of the world has to say about it. If I have any advice for anyone in the process of coming out, it’s just that there’s no right way to do it and that you’re doing fine. That’s it. You’re doing great. Keep sipping that chardonngay if it feels right. Don’t if it doesn’t. In the words of @spaceykacey, just follow your arrow wherever it points. 🌈 #nationalcomingoutday

Taking my wife’s last name was another connection between us that made a difference to the outside world in addition to deepening how we feel about each other. Sharing a last name makes me feel validated when we book a flight together, or check into a hotel, or get our taxes done. If that sounds utilitarian, it is. But that’s part of the point. It’s making those typical, everyday experiences reflect the new boundaries of who we are. I’m not losing my individuality, but I am presenting a new part of my identity that’s now aligned with hers, and if you ask me, that’s as romantic as it gets. It’s not about who changes their name; it’s just about making it the same. Out of every single other person out there in the world, we chose each other. And as two women living in a country where marriage equality was just legalized federally five years ago, us being married is still a statement, whether we want it to be or not. There was a time not at all long ago where I couldn’t legally call myself her wife, and that’s something I’m always aware of. Choosing to take the same name as her was another way to celebrate everything that simple gesture symbolizes. The process itself was anything but exciting, but there was still a thrill in changing my name to hers. It’s an unmistakable link, a bond that can be seen on our licenses and passports and my new signature. If you ask me, that alone makes it all worth the paperwork.