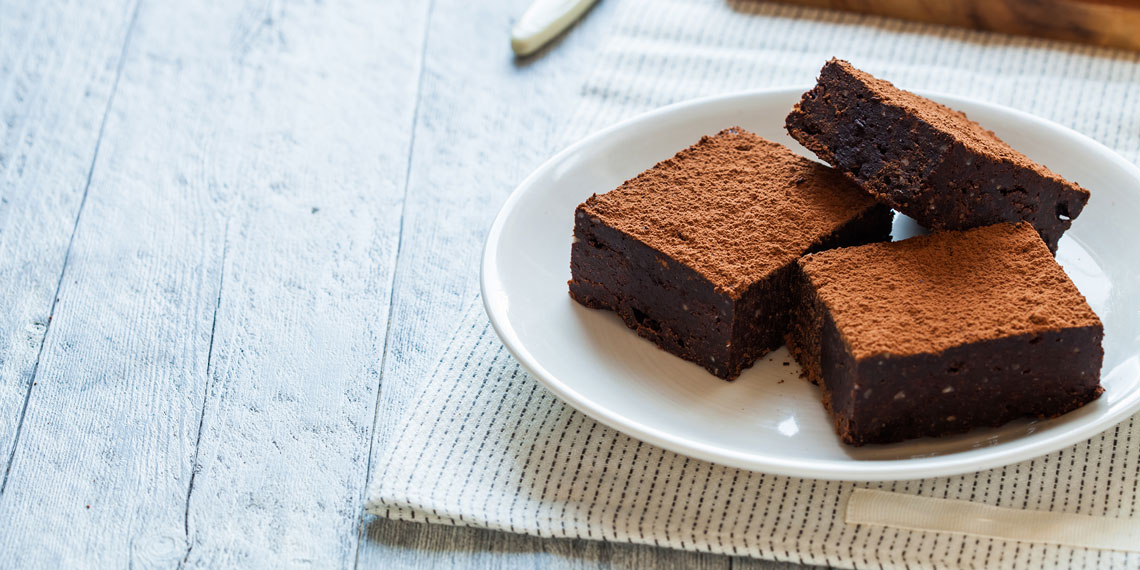 Healthy chocolate desserts sounds like an oxymoron, but like many things in life (calorie-free ways to get drunk, easy cheats to get a bikini body in 48 hours, zero-calorie foods), countless hours and millions of questionable blog posts have been dedicated on how to do the impossible. And while much like the other fads mentioned above, a perfectly healthy and delicious chocolate dessert doesn’t exist (duh), there are certainly semi-healthy, semi-tasty options out there.

I suppose I should probably preface this by reminding everyone of the obvious fact (if this hasn’t been beaten into your heads enough already) that it’s OKAY to treat yourself to something gloriously unhealthy. Eat that thousand calorie slice of Death by Chocolate cake if that’s your jam. However, sometimes you might want to have your cake and eat it too, without worrying about messing up your macros or eating gluten or whatever everyone does these days.

Since I love eating weird food and experimenting in the kitchen, I’ve tried a bunch of honestly disgusting unique “desserts” over the years, some which have (shocker!!) majorly sucked. A few have been pretty decent substitutes, however, so without further ado, here are some so-called desserts to steer clear of (no matter what your fave healthy dessert blog promises you) and some actually decent options to try.

Just no. There are countless food blogs that insist avocado is a great butter substitute (false! Avocados are rubbery and tasteless), that cauliflower is a tasteless low carb flour sub (please imagine a cauliflower-chocolate brownie and try not to vom), and that black beans work great for color, texture, and taste (ALL I COULD TASTE WAS BEANS). Vegetables do not belong in brownies. You know what belongs in brownies? Sugar and lots and lots of *real* chocolate. That’s why the real thing tastes so good, and substitutes generally suck.

I also once tried a recipe that promised 35 calorie brownies. It was essentially cocoa powder, water, and stevia mixed together and was the most f*cking disgusting thing I’ve ever made. The internet is lying when bloggers claim they “taste just like the real thing!”

The closest decent “healthy” brownie I’ve tasted have either subbed in silken tofu (don’t laugh) or pureed dates (think Lara Bar vibes) for about half of the unhealthy ingredients, which can taste decent if you also add a lot of melted chocolate and sugar…but at that point, you’re delusional if you’re still calling it healthy.

Every basic high schooler’s beloved Ghirardelli’s brownie mix wins out ultimately, or by all means, try some fancy French recipe if you’re extra. If gluten scares you (or if you’re actually—like actually—celiac) then sub in some other grain because you won’t really taste the difference, but it’s not going be particularly healthy…which is why it will taste amazing. So live life and chill TF out.

Some company has been apparently trying to invent zero calorie chocolate for ages but I expect that zero calorie chocolate will come into existence when cars fly (IDK how technology is coming, though, so maybe that’s sooner rather than later). However, there’s an actually brilliant brand of zero sugar chocolate that doesn’t taste fake. As long as you’re not weirded out by sugar alcohols, I highly recommend Lily’s Chocolate (this isn’t an ad—I’m simply addicted to their chocolate). Their salted almond bar, puffed rice bar, and dark chocolate chips are all fire. Plus, all their dark chocolate is dairy free/vegan which is great if you’re me. And they sell it at Whole Foods.

…with silken tofu. Before you roll your eyes because ewww tofu, it’s literally tasteless and a great thickener. You literally just blend some silken tofu in a blender, add some cocoa powder and melted chocolate, vanilla, and salt, then maybe a little stevia or sugar, and you’re golden. It’s soooo good and so low cal.

Most protein bars taste like absolute sawdust. I’m not exaggerating. You bite into something that looks like a candy bar and you receive a mouthful of sickly sweet chewy sawdust. And worse, it actually, like, pea protein congealed into a bar and covered in fake chocolate. Yummy.

The tastiest (but not particularly healthy) granola bar is probably a Chocolate Chip Clif Bar. First I thought they tasted a little too processed. Then I accidentally left one in my car and it melted into a consistency of a warmed chocolate chip cookie, which was pretty amazing. So try microwaving them for like, 20 seconds and you’re golden. However, they also have a lot of sugar and aren’t like, the healthiest, so boo.

In terms of actual protein bars, NuGo Slim Bars taste about half as good but have like, three times as much protein and about 80 fewer calories than Clif Bars. So they’re a pretty good chocolatey snack if you’re a hardo.

The rest sucked and I genuinely don’t understand how protein bar companies stay in business.

In conclusion, all of these desserts are pretty decent. But nothing will ever compare to a giant slab of chocolate Texas sheet cake. Or a chocolate glazed Krispy Kreme donut. Or a giant Levain chocolate chip cookie. If you don’t know what any of these things are, I recommend turning to Google to rectify this situation ASAP.