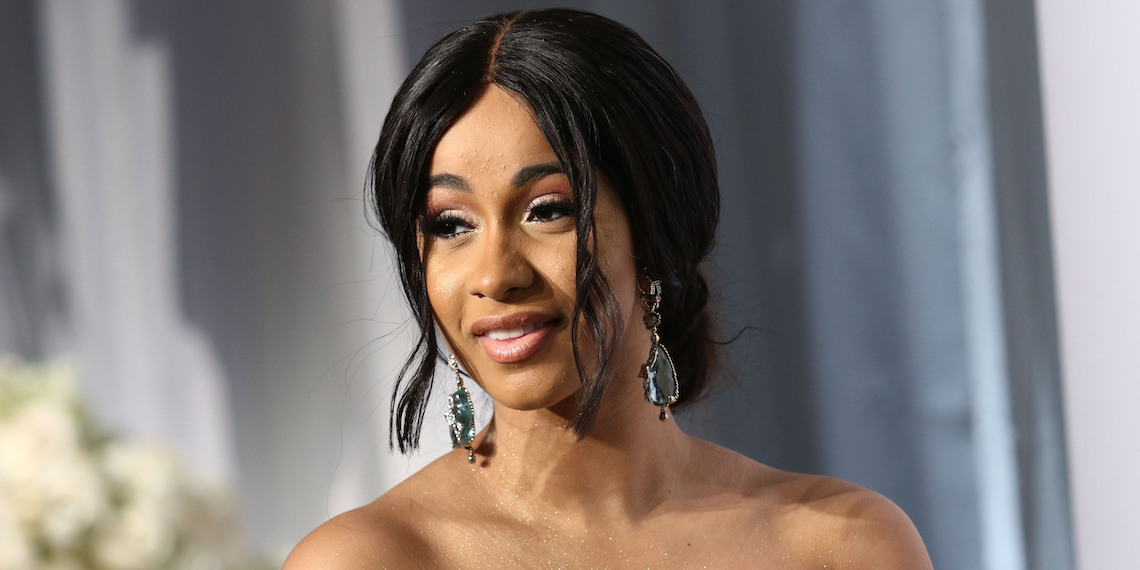 From Cardi B To Kylie, These Are The Dumbest Phrases Celebs Trademarked

Over the last two years, Cardi B has truly transformed from a random person on Love & Hip-Hop to one of the biggest stars in the world. This week, it was announced that she’ll be making her film debut, but that’s not the only business move she has in the works. I have a feeling some new merch is coming in the near future, because Cardi B has officially trademarked “Okurr.” She’s making money moves.

The official trademark designation is for “Clothing, namely, T-shirts, sweatshirts, hooded sweatshirts, pants, shorts, jackets, footwear, headgear, namely, hats and caps, blouses, bodysuits, dresses, jumpsuits, leggings, skirts, sweaters, undergarments,” so we can definitely expect Cardi B to drop an OKURR clothing line any day now. This is very on brand for Cardi, and I’m sure she’ll sell millions of whatever she decides to make. I’m only a little salty about this, because she definitely wasn’t the first one to start saying this (I’m looking at you, drag queens).

Okurr is far from the craziest thing that a celebrity has trademarked, and at least Cardi B isn’t claiming ownership of a real, everyday word. Here are some of the most hilarious celebrity trademarks:

I won’t dive into my personal feelings about Taylor Swift today, but she has a long history of trademarking her lyrics. Some of these are pretty specific, like “Look What You Made Me Do” or “The old Taylor can’t come to the phone right now.” But Taylor has also gone after some trademarks that are honestly so questionable. In the past, she’s tried to trademark her album titles “Fearless” and “1989,” and I don’t get it. Fearless is a word. Like, it was fearless of me to push through my crippling hangover and make it to brunch last weekend. And 1989 IS A F*CKING YEAR. Taylor can have “this sick beat,” I don’t really care, but 1989 is too far.

Out of all the dumb celebrity trademark drama, Kylie Jenner’s might be my favorite. Back in 2015, Kylie filed a trademark request to use “KYLIE” for “advertising and endorsement services.” Does Kylie really think she’s the only person in the world named Kylie? This turned into a major issue in early 2016, when legendary pop star Kylie Minogue filed her opposition. Behold, the most passive-aggressive tweet of all time:

Hello….. My name is KYLIE #lightyears

This case went back and forth for almost a full year, until Kylie Minogue withdrew her opposition. About a month later, the trademark office rejected Kylie Jenner’s claim. So sad! More recently, Kylie tried to trademark “Kylie Skin,” leading to speculation that she’s planning to launch a skin care branch of her cosmetics line. No news about this yet, but this is probably how Kylie will make her second billion dollars.

Unsurprisingly, Beyoncé has lots of trademarks, and most of them are pretty n0rmal. There’s “Beyoncé,” “Beyhive,” and a few different fragrance names. The most intriguing thing is that Beyoncé has trademarked the names of all three of her children. The trademarks apply to basically ever kind of product imaginable, but it doesn’t actually seem like Bey has any plans to use them. More likely, she just wants to prevent other people from profiting off of her kids. Lol, this is such a famous person problem to have.

After performing at the Super Bowl in 2015, Katy Perry moved to capitalize on a viral moment, and tried to trademark “left shark,” “right shark,” “drunk shark,” and “basking shark.” Wow, imagine a time when we cared this much about a dancing shark at the Super Bowl Halftime Show. Katy’s trademark filings were initially denied, but eventually she appealed and got approved for them. Katy also has various spellings of “Katycat” trademarked, because apparently people are really dying to pretend to be Katy Perry fans these days.

“Yes i have 4 years of Juilliard and i was shark number 2 in a little production called the Super bowl” pic.twitter.com/hiVCZtDI8B

actually blown away that the name of Kim Kardashian’s company is Kimsaprincess inc – she's out here conning us all with her fast fashion partners in crime with a 2003 Myspace namehttps://t.co/CK7rjVO0XW pic.twitter.com/kdAUazUweF

Kim Kardashian’s trademarks are really nothing out of the ordinary–mostly just variations of her name and initials. What’s more important is the company behind her trademark applications. All of these celebrities have like, fake companies that they use to apply for trademarks, and Kim’s is called KIMSAPRINCESS, INC. You guys, I am dying right now. For reference, Khloe’s is KHLOMONEY, INC., and Kourtney’s is called 2DIE4KOURT. I love this so much, you don’t even know. I feel like this is actual confirmation of what all the Kardashians’ AIM screen names were back in the day. I’ve never related to the Kardashians more.

If you just can’t wait to get your hands on an “okurr” shirt, you’re in luck, because Shop Betches has “I Said Okurrrr” and “She Said Okurrrr” tanks available… for now.