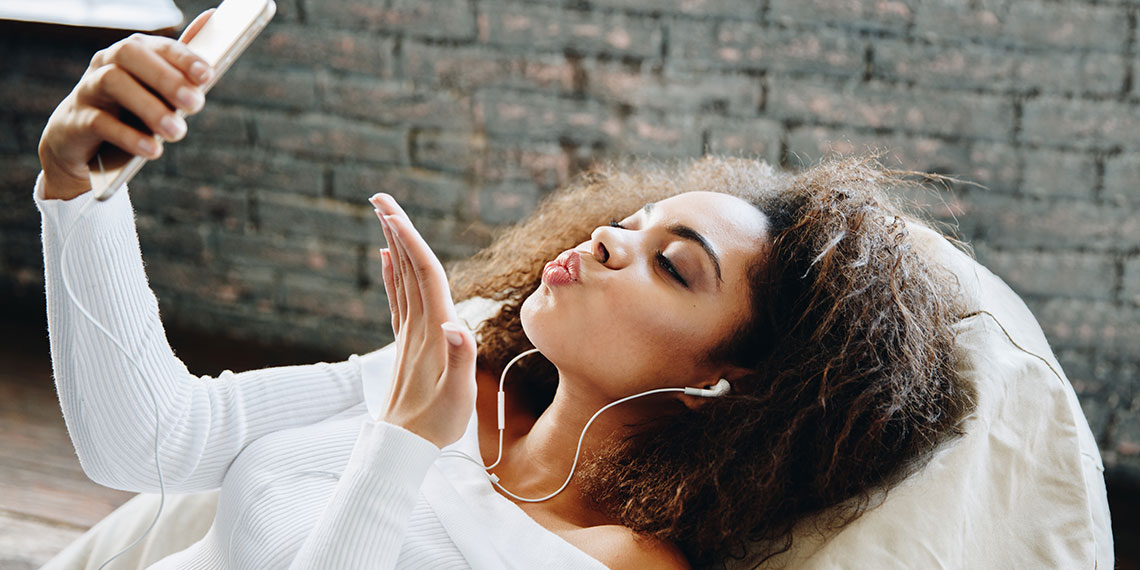 Finding Love In A Hopeless Place: Dating Stories From The Pandemic

When Jillian Trubee first saw the now-ubiquitous Instagram memes about virtual dating in the midst of coronavirus quarantine, she wondered who out there was actually going on FaceTime first dates or having a movie night via Netflix Party. As an avid dater in New York City, she thought she’d seen it all, but it wasn’t until a few days later that she would experience this new phenomenon first-hand.

“I go on dates all the time, and I really enjoy the act of dating,” Jillian says, but as the coronavirus pandemic worsened and the 27-year-old returned home to California to ride out the crisis, she wasn’t sure what it would mean for her usually busy and exciting dating life. She kept her Hinge location set to New York and continued using the app, if only to see what would await her return, but after matching with a guy named Kevin, it seemed like virtual dating, a once foreign concept, would hit close to home after all. “We chatted for a few days, and he was like, ‘Normally, I’d ask you out, but that’s not really the responsible thing to do right now, so would you be open to a FaceTime date?’” she recalls. “It was the first time someone had asked me that in this new world we’re living in, and I just thought, sure, why not?”

As COVID-19 continues its vicious spread across the country and forces everyone into quarantine, people are staying home, limiting outings unless  absolutely necessary, and keeping in touch with loved ones through FaceTime, Zoom, phone calls, and other virtual methods. But rather than view this unprecedented and unpredictable time as a roadblock to dating and meeting someone new, some believe the current situation is the perfect excuse to mix things up and establish a real connection, even if it is done through a screen.

After Jillian agreed to take Kevin up on his offer, the two set a time for their call, but they had no real plan going into it. “I just assumed we’d be having a drink while chatting,” notes Jillian, who was ironically sipping on a Corona beer at the time. Kevin called her—albeit 15 minutes late—and after sharing a laugh over the wild circumstances of their date, they spoke for about an hour. The conversation was pretty surface-level, and although Jillian enjoyed meeting him, she knew it wasn’t exactly love at first FaceTime.

“I didn’t really know what the etiquette was,” she says. “Like, do we stay on the call for a long time? It didn’t mean that I wanted to end it, but I also didn’t want to be on the phone all night.” And obviously, since none of us have anywhere to go, we can’t cite a prior commitment for ending a call. Still, when Jillian did hang up, she said, “it was very cordial, but I never heard from him after that, so I’m not really sure what happened. What I think that first endeavor into Facetime dating did for me, though, was show me that it’s not scary and that it is something I’d want to do again.”

The question of what, if any, dating rules apply to this unfamiliar terrain is one that many are asking, not only Jillian. But the answer isn’t so simple, and we’re all kind of figuring it out as we go. “Protocol does and doesn’t apply,” says Lindsey Metselaar, the creator of the We Met at Acme podcast. “I’ve always thought that a girl can initiate but then the guy has to take it from there, and I think I still really believe that now. But like with any relationship, one person can’t do all the work.”

Jordana Abraham, cohost of Betches’ dating podcast, U Up?, echoes that this is a weird time to be dating. “The traditional rules of dating seem to be thrown out the window as everything else in our lives is different than it’s ever been before,” she agrees. “I do think there has been somewhat of a desire to maintain a sense of traditional gender values around hetermormative daters I’ve spoken to. I’ve heard of guys Venmoing girls for drinks they have over FaceTime dates that they’ve had in their apartment.”

Though, while you certainly can still stick to gender roles, now is a better time than ever to shake things up. Abraham says, “I think both people can cut each other some slack in terms of things like texting first and who’s asking out whom. The stakes are pretty low here since you can’t actually meet up. It’s important to just be open and honest. If you want to text someone, do it. The worst case scenario is you’ll continue to (not) see them.”

As far as conducting the FaceTime date, Jordana says they should be between an hour and an hour and a half, especially for a first date—better to leave both of you wanting more than the opposite. And, if like in a regular date, you need to cut things short, she advises, “it’s okay to say anything you’d usually say to get off a call—like you’ve got to get to bed or your mom is calling you’re going to go watch your favorite show.”

Video chats are not just a good option for first dates; they’re also useful to maintain connections that were initially forged in person. For Nick, a 29-year-old asset manager, the coronavirus pandemic arrived at a rather inopportune time, just as he was planning a second date with a lady he’d recently gone out with. “As the news got worse and worse and then restaurants closed, that was no longer an option,” he says. “So, I suggested a FaceTime date so that neither of would have to leave our apartments.” After discovering their shared love of sci-fi movies on the initial FaceTime, the two decided to watch Blade Runner together on their next date. “We did a countdown to sync the movies together, and I had the movie playing full screen with a Zoom call overlay in the corner,” Nick says. “It turns out it’s harder to watch a movie when there’s a cute girl on your screen at the same time, but we did finish the movie.” The call went very well, but Nick thinks it was a huge benefit to have gone out once before and to know they had chemistry beforehand.

Texting in between dates hasn’t been a problem, and the relationship is reminding Nick of high school, when he’d talk to his girlfriend on the phone until one of them fell asleep. Although the whole thing is somewhat comical, he says it’s ultimately been pretty frustrating to crush on someone in the midst of a global health crisis. As time goes on, the pair is increasingly open to meeting in-person, even though current White House and CDC guidance is to avoid social visits. “I think we have a sense of how each one of us is handling the virus. Both of us have been working from home and haven’t seen any other people, friends, family or otherwise in the past couple weeks,” Nick says. “So, we’re making plans to see each other soon at one of our apartments. It’s nice to have met her in person just prior to the virus. I think that probably makes it easier.”

And coronavirus isn’t just impacting casual daters. It seems, at least by the looks of Instagram, that most established couples are in quarantine together, for better or for worse. But some, like Chicago-based influencer and relationship consultant Faiza Rammuny, who is quarantining apart from her boyfriend, aren’t so lucky. “It’s been an adjustment,” she says, “but we’ve made it work by adding FaceTime and Snapchat much more into the mix.” She and her boyfriend haven’t seen each other for a month, so they’re relying on calls, the occasional lunch or dinner date via FaceTime, or movie night with the help of Netflix Party to get them through this. “We’re making it work and doing our absolute best to not let the circumstances affect the relationship, which is something I’ve been drilling into my clients as of late as well,” the 35-year-old says.

Faiza also thinks it’s crucial that she, and anyone dating over the phone right now, make an effort and go the extra mile, not only for your partner but also for yourself. “Sometimes, I’ll just focus on the waist up,” she notes. “But even then, I’ll still fix my hair and put on makeup, and he does the same—minus the makeup.”

Whether a first date or simply a means of maintaining a serious relationship, the creative methods to dating virtually during this uncertain time have already taught some unexpected lessons that may even extend into post-pandemic life. Jillian often finds herself disappointed when she puts in all the effort required of an in-person date and doesn’t end up liking the guy, so FaceTime has actually proven to be a great alternative. “It let me figure out that I didn’t really like this guy in an hour, essentially, and it seemed like such a better use of my time than how it usually is,” she says.

Jillian also knows that she has to feel an emotional connection with someone before making things physical, which is sometimes hard to do when she’s going out for drinks and one drink turns into another. “Sometimes, I get to the physical part before I’m really invested in that emotional part, and it just kind of ruins everything going forward,” she explains. “So, I think being able to kind of get ahead of that and have a couple of FaceTime dates while we’re in this weird situation allows me to see if I really like someone and if I’m able to forge that emotional connection before the physical.”

But, as Faiza warns, it’s just as necessary to let this time show us the importance of true, in-person connection. “Don’t let the circumstances we’re currently in convince you to turn to virtual means for connection, rather than in-person,” she says. “This is what we have to do right now, and it’s a great substitute, but it does not beat human connection in the flesh, and if we think that way, it’ll only push us further apart as human beings.”

Gabby Shacknai is a New York-based freelance writer who covers beauty, food, travel, and the arts. She's written for ELLE, Travel+Leisure, Departures, Air Mail, Spotlyte, and plenty of the other publications you love. An alum of the University of Edinburgh and Columbia's Graduate School of Journalism, Gabby can usually be found hiding behind a book or fighting the urge to adopt every dog in town. You can follow her neuroses on Instagram at @gabbyshacknai.