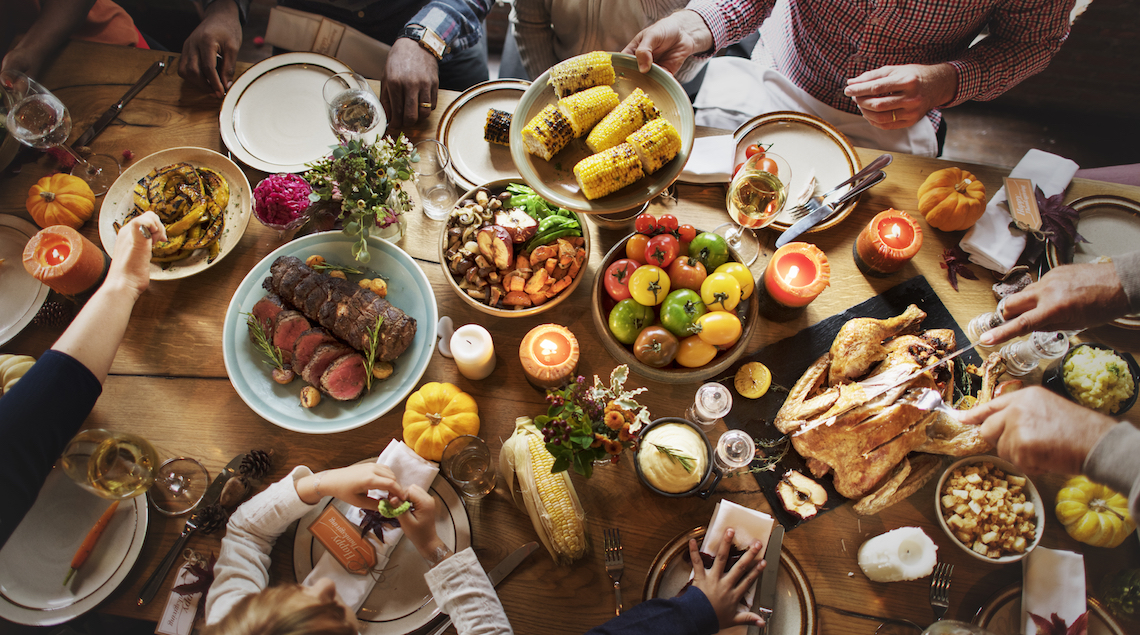 Omg yay. It’s the start of the season where we can totally gorge ourselves on meat, cheese, and carbs until we’re in a catatonic state but no one can say anything cause it’s the holidays and slouchy sweaters and sweatpants are totally in LOL. Welcome to Thanksgiving 2k18.

Because we’re like, adults, the polite thing to do is to bring a side dish, drink, dessert, or whatever to the Thanksgiving meal. Obviously, no one wants to be stuck in the kitchen making an intricate cake or multi-layer appetizer for a bunch of INGRATES that’ll inhale it in all of 30 seconds. What you need is an easy to execute and super impressive dish (or drink) that’ll potentially keep you off people’s radar for the entirety of dinner, making it less likely you’ll be the target of “why aren’t you married yet” or “you should focus on being a mom and not a career” comments. Help.

It isn’t a side dish, but it’ll get your Thanksgiving TURNT, probably lessening the likelihood that Grandpa will start spewing about what a great job Trump is doing (since he’ll be passed out), or a fight ruining dinner because you aren’t married yet and your eggs are dying, according to Aunt Diane. It’s literally as easy as soaking some fruit in booze, adding wine, and dumping it in a nice pitcher.

It’s an easy appetizer that covers a beloved vegetable in carbs and cheese–what more could you want for a holiday centered on ignoring calories? This recipe does require frying, which, fun, but it also allows you to utilize string cheese sticks, which I know you’ve been hoarding in your office fridge anyway.

YEP. You can either mash up the sh*t from the can that EVERYONE loves but no one will admit to liking (secret looooooovvvverrrrs), or make this super simple recipe which requires all of three ingredients. It’s one step long. You can do it. But honestly #cannedforever.

Buy some pumpkin and marshmallows along with a few other simple ingredients. Melt, beat, and chill. You can put this sh*t in individual ramekins (for the fancy betches) or in a chocolate pie shell, or say f*ck it and stay home, pretend to be sick, then eat this with a spoon while you watch reruns of The Office. We won’t tell.

I mean, cornbread is a mainstay on any southerner’s Thanksgiving table. If you’re not from the dirty South, make this anyway since it requires a bowl, a cast iron skillet, and not much else. It’s best served with fried chicken and collard greens, but turkey and dry stuffing works, too.

HEY, you know what your Thanksgiving table needs? Something that at least has the appearance of being healthy. Save the day with this winter slaw from Bon Appetit, which, aside from some heavy chopping, only requires some mixing. Plus, it’s bright and appealing; a welcome change when put next to the white, brown, and tan foods that’ll make up the majority of the Thanksgiving table.

I mean, no one DOESN’T like chocolate, probably. This recipe requires some light microwaving, mixing, and folding. Plus, you can top it with beautiful, bright pomegranate seeds, more chocolate, or f*ck it, leave it in a giant bowl in the middle of the table. No one will complain, it’s chocolate.

Melt chocolate, dip pears, sprinkle with crushed salted almonds. DONE. It’s fruit, it’s practically healthy, and it isn’t a pie that’ll sit in the middle of the dining room table that no one will touch.

All of these recipes are pretty simple, but I won’t judge if you really don’t feel like cooking at all. When in doubt, just buy an apple pie and pretend you made it. Or a cheese platter. Sorry not sorry, we can’t all be Ina Garten.