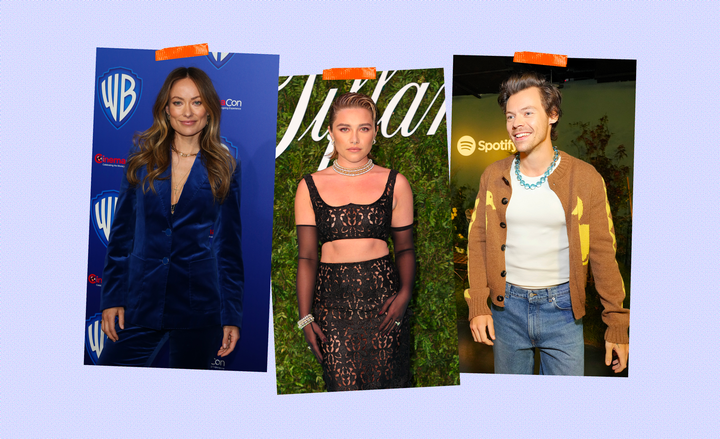 What’s Up With All The “Don’t Worry Darling” Drama?

All summer, Warner Brothers has been plagued with negative press surrounding The Flash and its problematic star, Ezra Miller. There was talk of scrapping the DC blockbuster all together until, miraculously, Ezra came out with an apology and a promise to seek help for “complex mental health issues.” One could imagine Warner execs breathing a 200-million-dollar sigh of relief at this turn of events.

Unfortunately, that respite didn’t last long because now, there’s another Warner Bros. film making headlines for all the wrong reasons.

Don’t Worry Darling, Olivia Wilde’s second directorial feature, has drawn a lot of attention from the outset—after all, it is where Olivia met current love interest, Harry Styles. But recently, there’s been even more drama. Amidst an onslaught of rumors and conflicting he said/she said stories from the set, “Don’t Worry Darling” is gearing up to be another project for Warner Bros to worry about.

Here’s a quick breakdown of what all the DWD fuss is about.

Why Is Olivia Wilde Facing Backlash?

Well, where do you want to start?

Don’t Worry Darling is a psychological thriller about a young couple in the 1950’s living in an experimental utopia. The film stars Florence Pugh and Harry Styles—both of whom are also at the center of all the commotion with Olivia (along with Shia LaBeouf).

For months, there have been rumors about tension between Olivia and leading lady, Florence Pugh. Their social media posts and interviews have been heavily scrutinized by the internet to determine whether or not said rumors are true. Recent claims that Harry Styles was paid three times more than Florence certainly didn’t help matters, either — although Wilde has refuted that.

Then, there’s the whole Shia LaBeouf thing. Initially, Shia was set to star alongside Florence, but in September 2020, he was replaced with Harry Styles. At the time, a vague “scheduling conflict” was cited as the reason. After that, news leaked that he was actually fired due to his on-set behavior (which, you know, wasn’t questioned.) But, now, he’s out here saying he quit and bringing the receipts, which definitely makes Olivia look bad.

And finally, there’s all the commotion with Olivia the film’s other star, Harry Styles.

What’s The Deal With Olivia And Harry?

Filming for DWD started in October of 2020. In November, Olivia revealed that she and Jason Sudeikis, her fiancé of seven years, had split. By January, Olivia was seemingly in a new relationship—with Harry. (The timeline here is a little iffy, but January 2021 is when paparazzi photos of the two holding hands first emerged, so we’ll go with that.)

Since then, there’s been a fairly messy custody battle between Olivia and Jason—in fact, Olivia was served custody papers in April while presenting DWD onstage at CinemaCon. There’s also been a whole lot of silence from both Olivia and Harry regarding their relationship status (but, come on, we all know they’re a couple.)

That hasn’t stopped the backlash, though. From the moment rumors started swirling about Olivia and Harry dating, there’s been a fair amount of online trolling, most of which has centered around their 10-year age gap. And, of course, given the timeline of events, there’s been plenty of armchair speculation about why Olivia and Jason broke up in the first place and whether or not Harry had anything to do with it.

What’s Going On With Olivia And Florence?

According to Page Six (so take it with a giant grain of salt), Florence wasn’t too thrilled with her director and her co-star hooking up. A source told the outlet that Olivia’s on-set affair with Harry “did not go down well” with Flo.

Celebrity gossip is certainly nothing new, but this one really started to pick up steam this summer when social media sleuths started sleuthing. Look at the way Olivia and Florence have talked about the film, it’s hard not to notice how different their promotional strategies seem to be.

Olivia has taken the standard press-tour approach—you know, interviews, Instagram posts, behind-the-scenes mood boards. Florence, on the other hand, has been relatively quiet. Suspiciously quiet. As in, one-singular-social-media-post quiet.

Oh, and an interview with Harper’s Bazaar where she praised the film’s production team, the crew, and the Covid nurses but said exactly nothing about working with Olivia.

She also expressed discomfort with the way media coverage of DWD has been largely focused on the sex, saying “When it’s reduced to your sex scenes or to watch the most famous man in the world go down on someone, it’s not why we do it. It’s not why I’m in this industry.”

She has a fair point, but it just so happens to be in stark contrast with Olivia’s. Since the outset, she’s been promoting DWD’s portrayal of “female pleasure.” She doubled down on that stance in her recent Variety cover saying, “I think it’s integral to the story itself.” (As for the rumors of a pay discrepancy between Harry and Florence, she dismissed those as having “absolutely no validity.”)

Still, Florence declined to be interviewed for the piece and, just a few days later, announced that her press tour for DWD would be limited to the Venice Film Festival debut.

What’s Shia’s Role In All Of This?

And here’s where this mess gets even messier.

In the same Variety interview, Olivia talked about her decision to fire Shia saying, “He has a process that, in some ways, seems to require a combative energy, and I don’t personally believe that is conducive to the best performances.”

She went on to say, “A lot came to light after this happened that really troubled me, in terms of his behavior,” in reference to the allegations made by Shia’s ex-girlfriend, FKA Twigs.

After the story was published, Shia offered his two cents. Reaching out Variety, he claimed he wasn’t fired but, in fact, quit. To corroborate, he included some email and text exchanges along with a video message from Olivia.

The video quickly went viral. In it, she certainly appears to be asking Shia not to leave the film. She also appears to be tossing some shade at Florence, saying “You know, I think this might be a bit of a wake-up call for Miss Flo.”

Admittedly, it was not a good look for Miss Olivia.

What Happened At The Premier In Venice?

Don’t Worry Darling saw its world premiere on September 5 at the Venice Film Festival. I’m sure plenty of people were excited to see the film itself, but let’s be honest: we were all waiting to see how Olivia, Harry, and Florence would interact.

Harry and Olivia both arrived in Italy over the weekend (separately, it should be noted). Florence, however, didn’t fly in until the Monday evening premiere. Meaning, she wasn’t at the press conference earlier in the day. Suffice it to say, we were all bummed out by that.

But Olivia and Harry were there along with cast members Chris Pine and Gemma Chan. At some point, a journalist broached the topic and asked about Florence and the rumored falling out. Instead of answering directly, Olivia reiterated that Florence is an amazing actress (she is) and that she wasn’t able to attend the conference because of her jam-packed schedule (um, sure) before saying, “As for all the endless tabloid gossip and all the noise out there, I mean, the internet feeds itself. I don’t feel the need to contribute, I think it’s sufficiently well nourished.”

Basically, an eloquent version of “no comment.” When a second reporter then attempted to ask about Shia LaBeouf, he was quickly shut down by a moderator, leaving Olivia off the hook for that one.

After that, it was on to the premiere. Florence walked the red carpet in a sheer black and sparkly Valentino number — the kind of show-stopping gown that says, “This is my night, Olivia.” What’s more, her stylist, Rebecca Corbin Murray, shared several photos of the star on Instagram with a simple caption that read, “Miss Flo.” I mean, there’s no way that was coincidental, right?

On the red carpet, Florence greeted cast mates Gemma Chan and Nick Kroll with enthusiastic hugs. She was equally chummy with Chris Pine, joking with him as he snapped photos of her paparazzi style. Of course, she couldn’t exactly avoid Harry and Olivia (although, she pretty much did). When the entire cast posed for a group shot, she didn’t stand by either one.

Also noticeable, and perhaps more perplexing, Harry seemed to be avoiding Olivia, too. They didn’t pose together on the red carpet. Nor did they stand next to one another in the group photo. In one clip circulating on Twitter, it looks like a staff member is trying her damnedest to get Harry to stand next to Olivia while he just blatantly pretends not to notice.

Inside, the dynamic continued with Chris seated in between Olivia and Harry and Florence several seats away. Another odd moment went viral when Harry went to sit down and appeared to spit on Chris (!), although Chris Pine’s rep has denied that. The film itself got a 4-minute standing ovation from the audience, during which Florence danced with Nick Kroll and kept her focus away from Olivia.

At this point, it seems like there’s more drama off-camera than on, and we can’t wait to see the next scene.