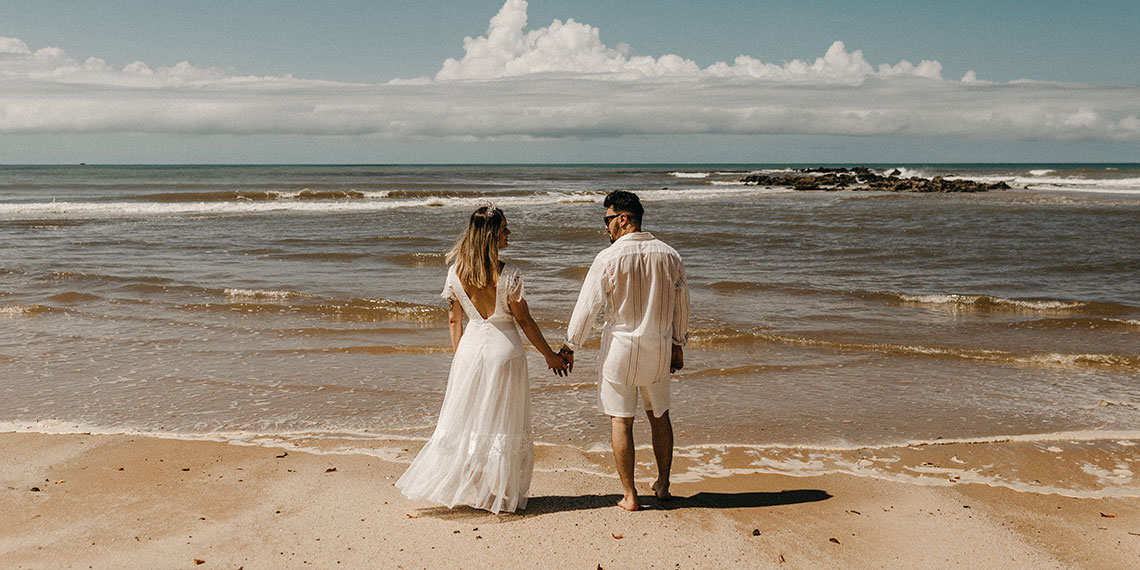 Crazy Wedding Story Of The Week: Groomzilla Won’t Dress Up For His Own Wedding

Once again, we prove two things thanks to internet stories. First, weddings make everyone lose all sense of proper decorum (if they ever had it to begin with, I guess, is up for debate). That’s why we continue to post these week after week. Second, which is not relevant to all crazy wedding stories, but certainly this one: The bar for men is literally buried roughly six to 20 feet below ground. It’s stories like these that make me thankful I’m married to a guy who is willing to make compromises and sacrifices, which is more than the groom in this Reddit story is willing to do. But, wait, isn’t that the whole point of marriage? That and the tax breaks. My husband also wore a suit to our wedding, which again, seems like the baseline standard, but is apparently too much for this Reddit groom. But enough from me—read the story for yourself.

Reddit’s AITA (Am I The Asshole) forum proves, once again, that it’s the gift that keeps on giving. Today’s story is written by a groomzilla who insists he be wearing the most comfy clothes on his f*cking wedding day. Never mind that this is supposed to be a once-in-a-lifetime event (or maybe not, given his attitude so far), that his bride-to-be seems to have some goddamn standards, or that you can’t put a price on class. He writes:

“Groom here. My fiancee and I are getting married in about a year. She’s already started shopping for her wedding dress and asked me to start taking a look at suits. Honestly, though, I’m really not much of a suit and tie kind of guy, and I dress extremely casually in my day-to-day life. Obviously, I’m going to make a point to look sharper than usual for the wedding. I’m planning to wear my favorite pair of jeans with a blazer and a decent button-up shirt, which should be comfortable while still looking nice.”

Awwww you poor thing! You aren’t much of a suit guy, huh? You, uh, can’t make an exception on your wedding day? Life sounds rough, bro! I wish we had a picture of this guy so I can settle in my mind whether he’s a douchey hipster with a man bun, a redneck that owns a small collection of Confederate paraphernalia, or a former member of TKE who owns a Crossfit gym and works the word “bro” into 90% of conversations.

Oh wait—he’s got a solution! He’s going to make A POINT to “look sharper than usual”! What a gem this guy is! And how, pray tell, does he plan to up his usual, I assume, Walmart sweatsuit look for the day he weds the love of his life? With his “favorite pair of jeans with a blazer and a decent button-up shirt”! Wow! Omg! This girl is LUCKY! I wonder how many PlentyofFish.com dates she went on before she met him? What a solid 10. I would give my left tit to shake his hand.

Mr. Personality goes on with his sob story about how he should get to wear whatever he wants without people judging him. It’s like women fighting for the right to wear cute sh*t without being cat-called, basically. I can smell his incredible activist spirit. This guy’s a true pioneer for men’s rights.

“My fiancee got really upset when I said I wasn’t going to wear a suit. She thinks jeans are way too casual for a wedding and says I’m going to look ridiculous and underdressed. But I don’t think that’s true. It’s not like I’m showing up in overalls and no shirt or something dumb like that, and I was a groomsman in a wedding just last year where all the guys wore jeans and suspenders.

I would never in a million years tell my fiancee what to wear to our wedding, because that would be insanely controlling, so I don’t think she should get a say in what I wear. AITA?

Edit: The wedding is in the woods at a forest preserve, if that makes a difference.”

There’s a lot to f*cking unpack here. Let’s go backwards: the wedding is in a forest preserve, as if that makes a difference. I’m pretty sure you should still wear something a bit more upscale than jeans to your WEDDING. Additionally, did you really bring in the whole “it’s controlling for my fiancee to tell me what to wear” argument? This is not the same thing as you telling her she can’t wear a low-cut top to go out with her friends because you don’t want guys checking out her cleavage. Plus, how f*cking stupid are you going to look standing next to a woman in a $2k dress while you’re in your “favorite” jeans?

My favorite argument point though, by far, is the “it’s not like I’m showing up in overalls and no shirt.” I’m sorry, but what? Neither jeans and a “decent button-up” nor “overalls and no shirt” are acceptable attire for a wedding. This brings me back to my “what kind of guy is he” question and, I think, clearly, the answer is option B, a redneck with Confederate paraphernalia. It’s the only way I can explain being a part of a wedding where gentlemen would ever consider wearing overalls on purpose.

Is He The Asshole?

Reddit and I have spoken and, yes, this guy is a f*cking asshole. Go ahead and @ me in the comments about men’s rights. There’s absolutely no reason this f*cker can’t dress up and throw his fiancée a bone for one day. Congratulations on your now-permanent position in every Facebook wedding shaming group of all time, Groomzilla. You’re arguing about wearing an outfit not acceptable to a job interview to your effing wedding. Give me a break.

My favorite comment, by far, on this thread comes from someone with the unfortunate handle of DefetiveCuckachoo:

There are two of you in this relationship. That means you need to learn to work together on common goals, and lift each other up, if you want to jealously assert freedoms and rights and boundaries then you aren’t partners, you are hostile neighbours at best.

Your fiance has normal expectations for your wedding day, and you are basically putting your feet up, rolling a blunt, blowing a cloud of smoke in her face, laughing about it and saying “IDGAF babe!” YTA.

PREAAAAAAAAACH. My only comment is that, hey, don’t bring the jazz cabbage into this.